My wife Marija was born in Whyalla in the ‘Iron Triangle’ region of South Australia, the name given to the iron producing region in the north of South Australia which is bounded by the towns of Whyalla, Port Augusta and Port Pirie.  Marija’s mum, and brother and his family still live there, so we venture up to Whyalla on a fairly frequent basis.  And we were due for another visit.  So bright and early on Friday morning (16th September 2016), we left home in the Adelaide Hills and commenced our 420 km drive north.

We headed into the city and then north out along Port Wakefield Road.  It wasn’t long before we came across the famous Port Wakefield Road protest sculptures at Lower Light.  These were built back in the 1990’s as a public protest to the South Australian Government who had proposed to build a large waste dump in the area.  Sadly the dump went ahead anyway, but the imposing sculptures stand as a reminder of people’s outrage at the building of the dump.

We continued north to Port Wakefield where we stopped briefly for a coffee and a sausage roll, and then headed further north through the Mid North of South Australia.  Along the way we passed the 3 little SOTA summits in the Hummock Range ‘The Hummocks’ and then a number of SOTA summits in the lower Flinders Ranges.  Also Telowie Gorge Conservation Park and the Mount Remarkable National Park.  I had an itchy PTT finger already.

We arrived at Whyalla around lunchtime and headed straight to Marija’s mum’s house.  My mother in law is of Croatian background.  So after a typical big meal, consisting of Snapper, calamari, and prawns, I headed out to the Munyaroo Conservation Park (CP) VKFF-0920 and 5CP-154, whilst Marija and her mum went shopping.   Munyaroo CP is about 36 km south west of Whyalla. 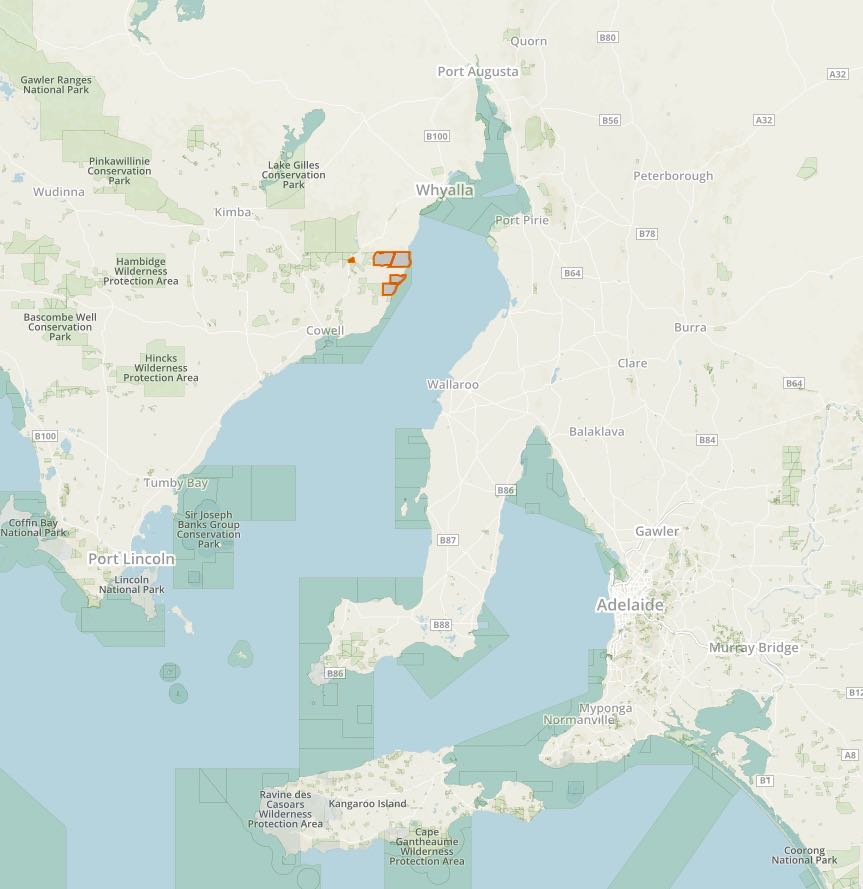 Above:- Map showing the location of the Munyaroo Conservation Park on the Eyre Peninsula of South Australia.  Map courtesy of Protected Planet.

Munyaroo consists of three autonomous sections of land comprising a total of 123 km2.  Two of these adjoin the coastline with Spencer Gulf,  immediately south of Muminnie Beach and Plank Point and the third being located to the west on the east side of the Lincoln Highway.  I have operated from this park previously from one of the coastline sections, but for this activation I headed to the Lincoln Highway section.

This was to be a unique VKFF park for me, and the first time the park had been activated for World Wide Flora Fauna (WWFF).  I did operate portable from Munyaroo back in December 2014, but that was prior to the park being added to the WWFF program.  So that activation was exclusively for the VK5 National and Conservation Parks Award.  For more information on my previous activation of this park, please have a look at…..

Munyaroo was proclaimed in 1977, and is considered to be significant in that it provides an important habitat link between the coastal vegetation and inland mallee of the Eyre Peninsula.  The two large coastal sections include low impact sandy beaches with an intertidal zone of mangrove and samphire communities.   This provides habitat for various shorebirds including plovers, terns and the rare Sooty Oystercatcher. 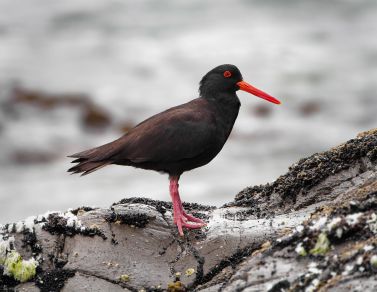 Above:- Sooty Oystercatcher.  Courtesy of Wikipedia.

Low open woodlands of Western Myall and False Sandalwood, with a Bluebush and Bladder Saltbush understorey, exist behind the coastal dune system.  Yellow Swainson-pea which is listed as vulnerable can be found here, along with Dwarf Four-toed Slider which is listed as rare.

Above:- Map showing my operating spot in the park, and the nearby coastline, and the towns of Whyalla and Port Augusta.  Image courtesy of Google maps.

Prior to the establishment of the park, the area was used for grazing, and a small coastal strip was cropped.  The ruins of a farm dwelling and various farm implements can be found in the park.

As I travelled south along the Lincoln Highway, the Iron Duke mine came into view in the Middleback Ranges.  Arrium mining control the mine here, and they are an exporter of hematite iron ore.  They supply iron ore feed to Arrium’s integrated steelworks at Whyalla.  My brother in law works for Arium.  The business currently exports approximately 12 million tonnes per annum of hematite ore, primarily to China.  Iron ore has been mined in the Middleback Ranges for around 100 years.

Above:- View of the Iron Duke mine from the Lincoln Highway.

I continued south west on the Lincoln Highway until I reached Plane Road which runs off to the south east.  I turned left here and entered the park.  Plane Road actually disects the park.  So if you set up on either side of the road, you are safely within the park boundary. 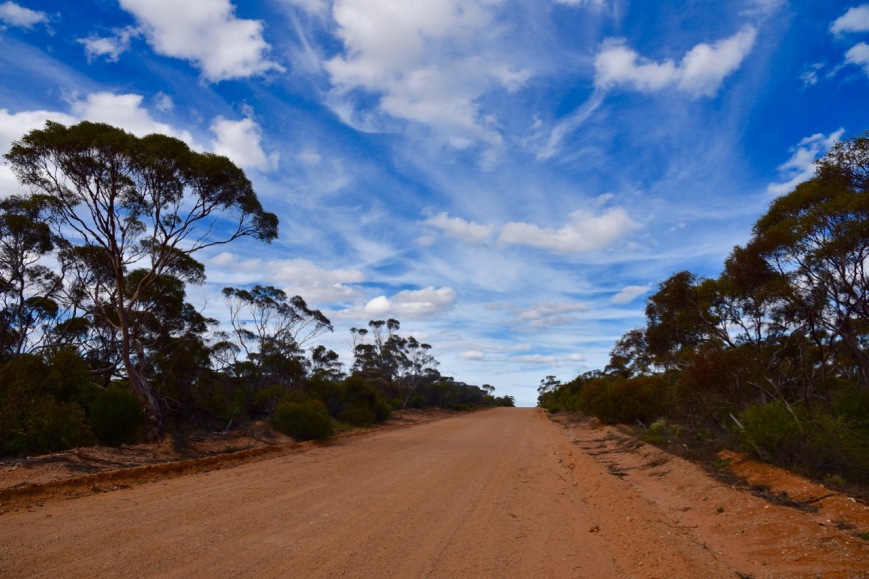 Above:- Looking along Plane Road, with the park on either side.

A few hundred feet from the Lincoln Highway and Plane Road junction, I found a clearing in the scrub and set up my station here.  This was on the south western side of Plane Road.

Above:- Aerial image of the Munyaroo Conservation Park, showing the 3 autonomous sections, and indicating my operating spot.  Image courtesy of Protected Planet.

For this activation I ran the Yaesu FT-857d, 40 watts, and the 80/40/20m linked dipole supported on the 7m squid pole.  The ground was quite sandy so the squid pole holder slid into the ground nicely.  It was quite a warm afternoon, so I made as much noise as possible to keep any snakes at bay.  The flies here were absolutely relentless. 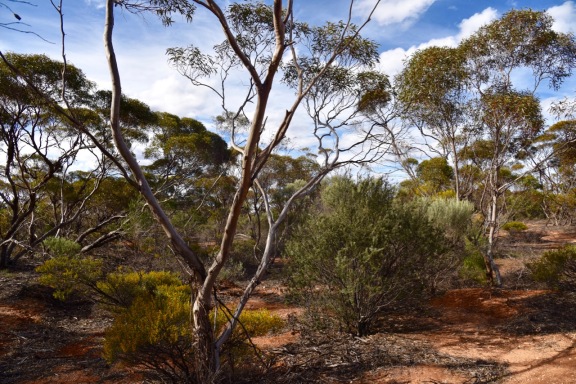 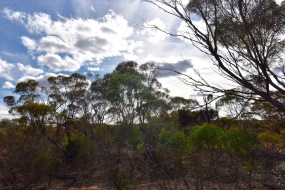 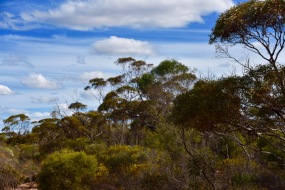 The park was alive with flower during my visit as you can see from the photographs below.

I headed to 7.144 and found Les VK5KLV calling CQ from the Upper Spencer Gulf Marine Park VKFF-1757.  As Les was only a 100km or so away,unsurprisingly he was 5/9 plus to me.  A nice way to start the activation with a Park to Park contact.

I then moved down to 7.135 and was followed there by Mick VK3GGG.  Next up was Rick VK4RF, followed by Dennis VK2HHA, and Ron VK3MRH.  Rick was a strong 5/8 signal but there was some QSB on his signal.  Netherless a good signal coming to the West Coast of South Australia from Queensland, about 2,000 km away.

I scored one further Park to Park for this activation, and that was with Rob VK4FFAB who was portable in the Maleny National Park VKFF-0690.  Rob had a good 5/5 signal into Munyaroo.  I also spoke with Dave VK2JDS in the Norah?? National Park and Paul VK2WPT/7 in the South West National Park.  Sadly they do not partake in the WWFF program, so although they were Park to Park contacts, they will not count on Logsearch.

I worked a total of39 stations on 40m from VK2, VK3, VK4, VK5, and VK7, before QSYing to 20m.  I headed to 14.310 and commenced calling CQ and this was almost immediately answered by Fred VK4FE who was a strong 5/8 signal, but who was competing with the Over the Horizon Radar.  My next caller was Joszef OK1ES in the Czech Republic, followed by Bill VK4FW, and then Rick VK4RF.  I went on to work a further 6 stations from Western Australia, Japan, Czech Republic, Germany, and Croatia.  It was now 0550 UTC and just a little too early for long path Europe.

Finally to finish off the activation, I headed to 80m where I called CQ on 3.610.  This was answered by Adrian VK5FANA on the Yorke Peninsula with a strong 5/8 signal.  Adrian responded with a 5/8 for me.  But despite a number of CQ calls, Adrian was my only taker on the 80m band.

It was approaching 3.30 p.m. South Australian local time and it was time to pack up and head off to my next park, the Ironstone Hill Conservation Park.  I was very pleased, with another unique VKFF activation under my belt, and a total of 51 contacts in the log.

Thanks to the following stations for spotting me: Mick VK3PMG, Fran OK7WA, Rick VK4RF, and Adrian VK5FANA.

The following station was worked on 80m SB:-