Yesterday (Sunday 6th November 2016) after getting home from the Adelaide Hills Amateur Radio Society (AHARS) Buy and Sell, myself and my wife Marija VK5FMAZ headed out to activate the Montacute Conservation Park VKFF-0910 and 5CP-139, which is located about 17 km north east of Adelaide in the Mount Lofty Ranges ‘Adelaide Hills’. 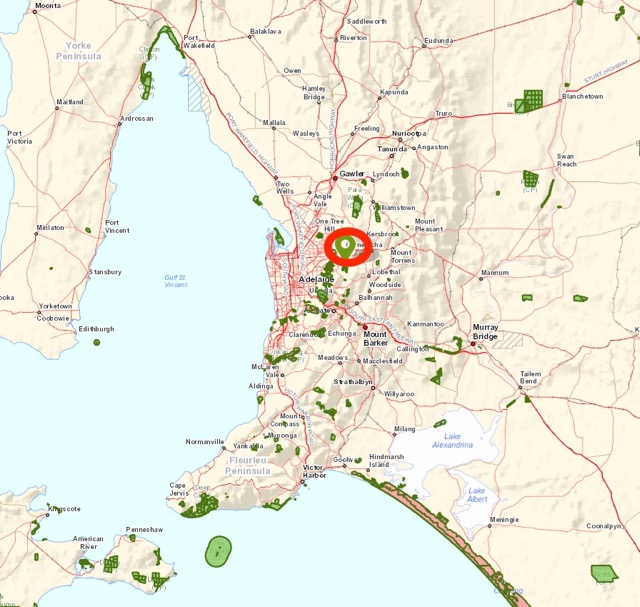 Above:- Map showing the location of the Montacure Conservation Park in the Adelaide Hills.  Map courtesy of Location SA Map Viewer.

I have activated Montacute once before, back in July 2013, but this was before the park had been added to the World Wide Flora Fauna (WWFF) program Directory.  So my previous activation only qualified for the VK5 National and Conservation Parks Award.  This was to be a unique activation for both Marija and I for WWFF.

Last time I was at the park, I operated from the end of Valley Road.  So I was curious to see if I could access the park from another location.  I studied the maps prior to leaving home and it suggested I might be able to access the park on the eastern side, from Stone Hut Road.

So after leaving home we headed out through Woodside and then on to Lenswood.  This is a particularly beautiful part of the Adelaide Hills, with quite steep terrain and numerous cherry and apple orchards and vineyards. 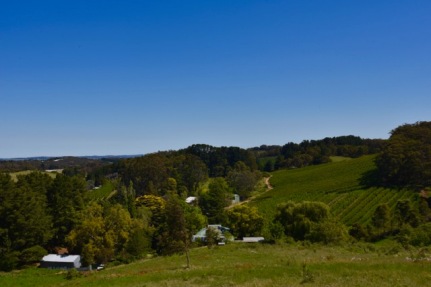 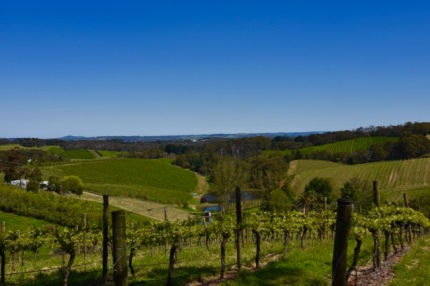 We eventually reached Prankerd Road which runs off Croft Road.  It was here that we were hoping to access the park via Stone Gut Road.  But unfortunately we encountered a locked gate at the Mount Crawford Forest Reserve. 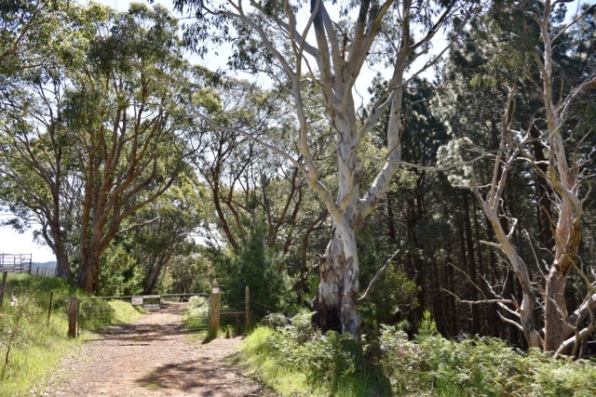 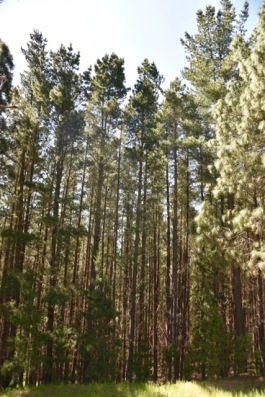 So it was an additional 30 minute drive for us through Cudlee Creek to the western side of the park.  Along the way Marija and I stopped off at the old viewing area for the Kangaroo Creek Reservoir.  Sadly this is now closed, but we parked the car at the locked boom gates and walked a few hundred metres up to the old lookout.  It is a real shame that this is now closed as it is a great tourist drawcard.

Construction of the Kangaroo Creek Reservoir commenced in 1966 and was completed in 1969.  The capacity of the reservoir is 19,160 megalitres with an area of water spread of 103 hectares.  Water from Kangaroo Creek isreleased into the River Torrens as required, to maintain the level in the Hope Valley Reservoir with the water diverted at the Gorge Weir. 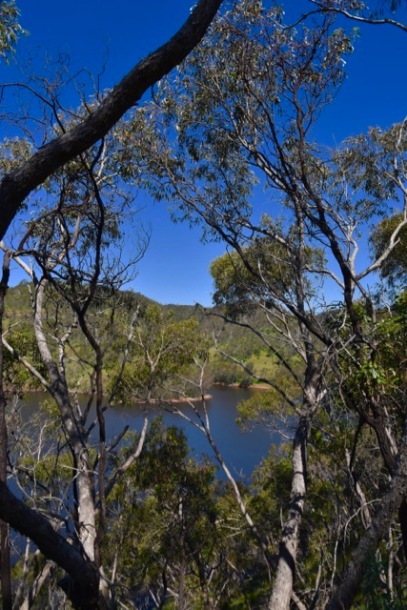 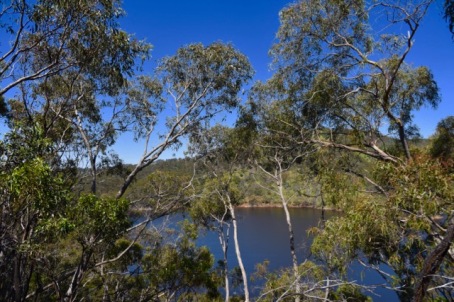 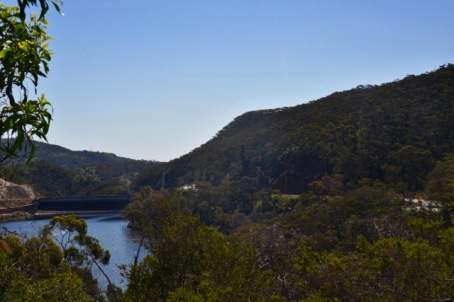 We eventually reached Corkscrew Road which runs off Gorge Road and travelled south until we reached Valley Road.  A few km along the road we entered the park. 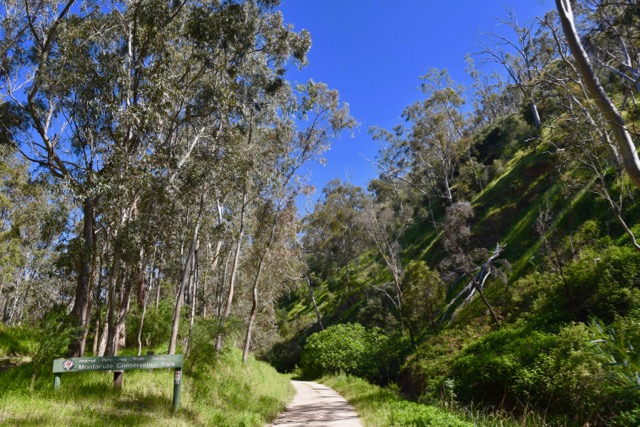 Above:- Entering the park along Valley Road.

At the end of Valley Road there is a small parking area.  This is where the Heysen Trail cuts through the steep terrain of the park.  Marija and I checked out possible operating spots and decided to head back to a small off road we had see just after entering the park. 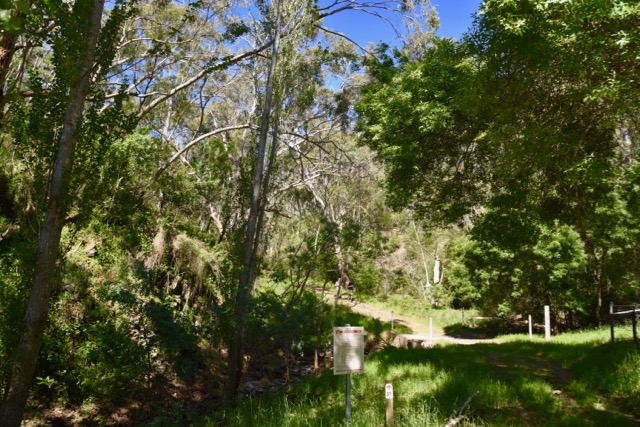 Above:- The parking area and commencement of the Heysen Trail at the end of Valley Road.

Montacute Conservation Park was established on the 1st January 1971.  The park is about 200 hectares in size and preserves remnant bushland which is separated by several small creeks.  Vegetation within Montacute varies significantly from the lower to higher slopes.  The creek line is dominated by magnificent river red gums with a low understorey of grasses and exotic plants.  The higher slopes within the park support stringybarks and blue gums.

A number of hikes can be undertaken through the park, including the famous Heysen trail and the Mawson Trail.

The park is home to a large amount of native wildlife including kangaroos and wallabies.  Numerous birds can also be seen in the park including Adelaide Rosellas, Superb Fairywrens, Grey Fantails and the Rufous Whistler. 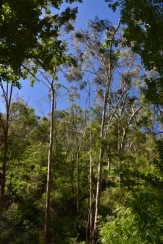 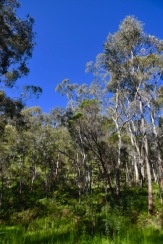 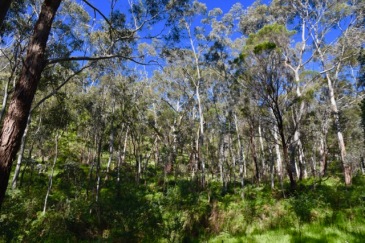 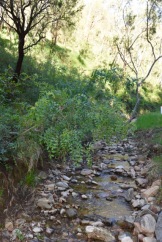 The park is located close to the little area of Montacute which has history dating back to 1843 when copper was discovered in the area .  A copper mine was established soon after, with one of the mine’s primary financiers Sir John Baker (1813-1872, naming the area after Montacute in Somerset in England, which was near his birth place.  Just as to how the copper was discovered is in dispute.  One proposition is that it was accidentally discovered by an overseer named Andrew Henderson who was searching for a strayed bullock.

The mines resulted in a small community developing along Fifith Creek, with several hundred men employed at the mine. 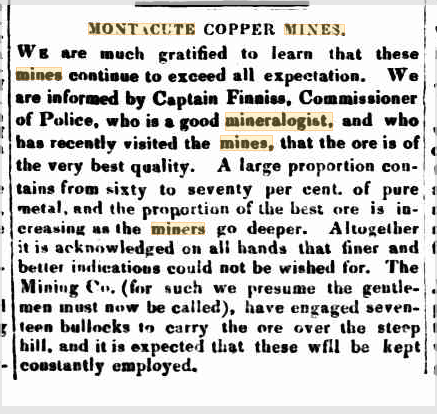 Above:- Article from The South Australian, 23rd Feb 1844.  Courtesy of Trove

In April 1846 gold was discovered at the North Montacute Mine, 1 km north of the original Montacute Copper Mine.  A building was erected over the main mine shaft and guards were posted to keep watch over the mine 24 hours a day.  This was the first recorded production of gold in South Australia.  It is reputed that gold from this mine was used by several Adelaide jewellers to mount South Australian gems, including a brooch which was sent as a gift to Queen Victoria.  In fact the mine was later renamed the Victorian Mine in honour of the Queen.  About 1 kg of bullion was produced from the mine. 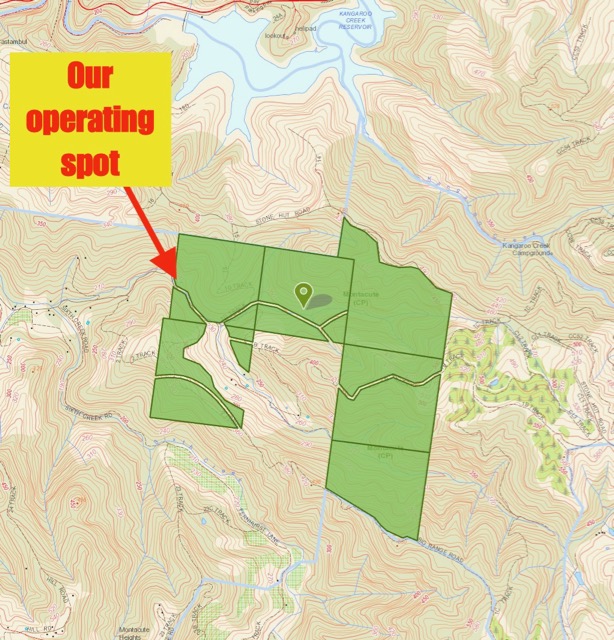 Above:- Map showing our operating spot in the north western section of the park.  Map coutesy of Location SA Map Viewer.

We headed for our nominated operating frequency of 7.144 and found that it was occupied by Neil VK4HNS/2 who was activating the Whian Whian State Conservation Area VKFF-1394.  Both Marija and I logged Neil for a Park to Park contact, before moving down to 7.139 where I started calling CQ.  This was answered by Adrian VK5FANA on the Yorke Peninsula who had an excellent 5/9 plus signal.  This was a good sign as the close in propagation has been less than ideal of late.  This was followed by a call from Les VK5KLB at Port Augusta who was also a great 5/9 plus signal.

Marija was quite happy in the deck chair alongside of me, reading her ipad, whilst I tried to reach the 44 QSOs required to qualify the park for WWFF.  I worked a total of 40 stations before things started to slow down, and we decided to change operators.  Band conditions were quite good with calls from VK2, VK3, VK4, and VK5.  A few good QRP contacts were logged including Nev VK5WG at Crystral Brook running 5 watts (5/9 plus both ways), and Peter VK3FPHG running 2.5 watts (5/7 sent and 5/8 received). 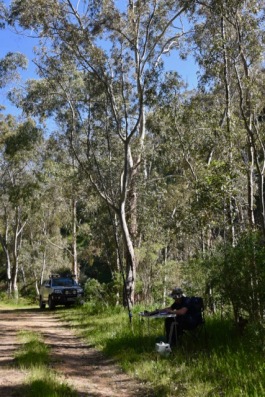 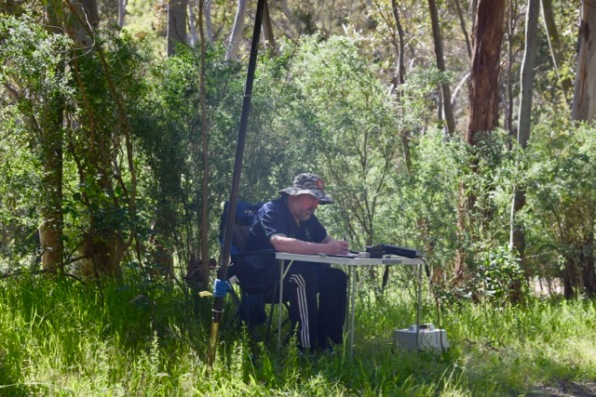 At around 0545 UTC Marija started calling CQ and it wasn’t long before she had a number of callers. Her first caller was Mick VK3GGG/VK3PMG, followed by Les VK5KLV and then Peter VK5KPR, both in Port Augusta north of Adelaide. 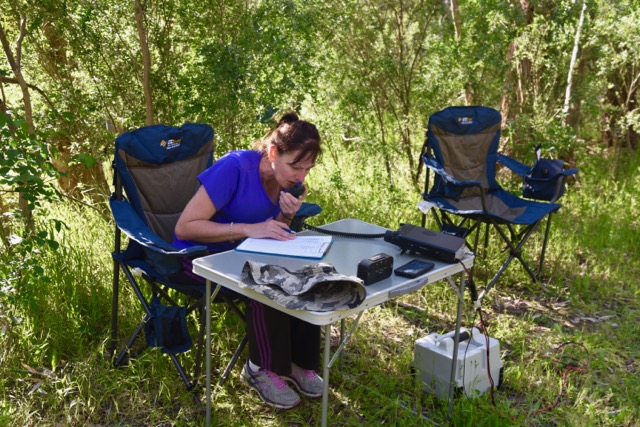 Whilst Marija was on air it gave me the opportunity of having a quick walk around the park.  A number of the native plants were in flower. 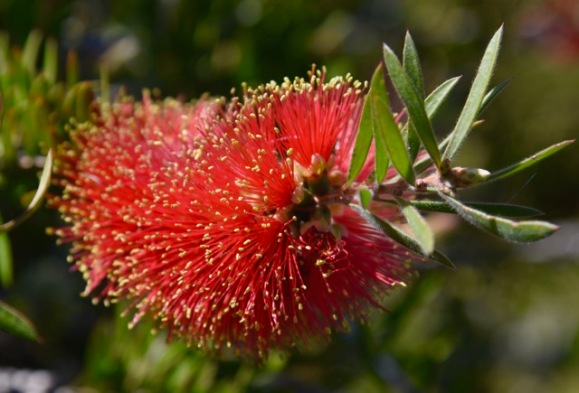 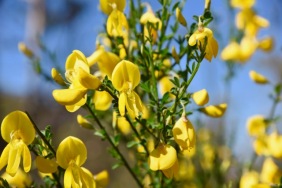 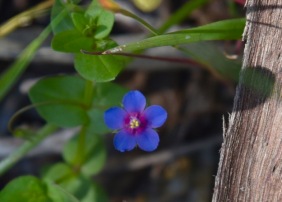 I came across this very healthy fig tree. 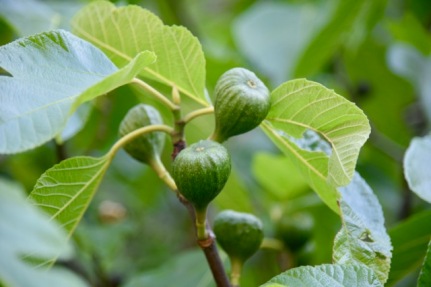 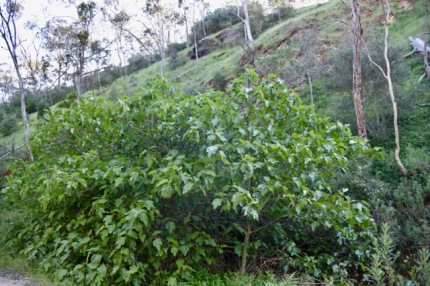 Marija logged a total of 16 stations on 40m, and decided she had had enough and handed the mic back to me.  Marija had qualified the park for the VKFF Australian program.  We lowered the squid pole and removed the links and I headed to 14.310 on 20m hoping to work a bit of DX.  But I was to be sadly disappointed, with absolutely no callers despite numerous CQ calls.  I tuned across the 20m band and the only stations I heard were VK2CR calling CQ DX, VK4ZD on the Rotary Net, and a very weak JA.  I didn’t hear any long path Europe at all.

So we again lowered the squid pole and inserted the links in the dipole and headed to 3.610 on 80m.  I started calling CQ and this was answered by Greg VK5GJ who was running 4 watts, with a nice 5/7 signal.  Greg and I have had a number of QRP to QRP contacts in the past, so we decided to try again.  Greg lowered his power down to 400 milliwatts and his signal dropped down to 5/5.  Greg then lowered his power down to 40 milliwatts and he was 5/1.  Very low down, but perfectly readable.  Sadly Greg could not hear me at 5 watts above his noise floor.

Before going QRT I had one final run on 40m where I logged 11 stations on 7.144 including Ken ZL4KD in New Zealand.  The NSW broadcast for the Wireless Institute of Australia then started up on 7.146 just as another station gave me a call.  So I QSY’d down to 7.135 where I worked Bill VK4FW, Hans VK6XN, and finally Sergio VK3SFG, before calling it quits.

It had been a beautiful afternoon in the park, with a total of 79 contacts logged between Marija and myself.

Marija and I headed for home, but not before enjoying some views of the park from Corkscrew Road. 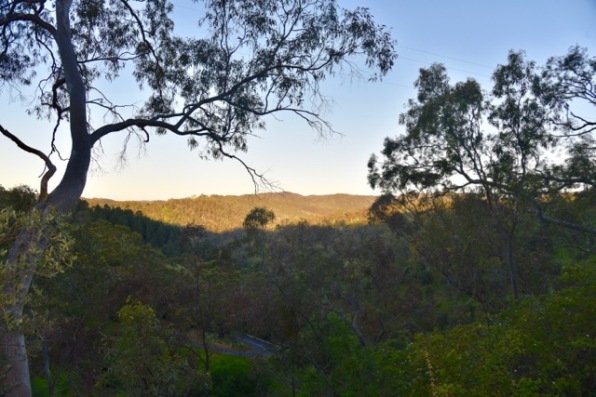 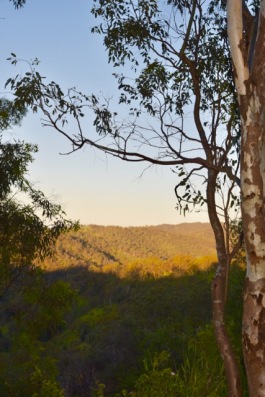