My second planned park activation for Sunday 27th November 2016 was the Swan Reach Conservation Park VKFF-0832, which is located south of the Swan Reach to Sedan Road, and about 10 km west of the town of Swan Reach and about 120 km from Adelaide. 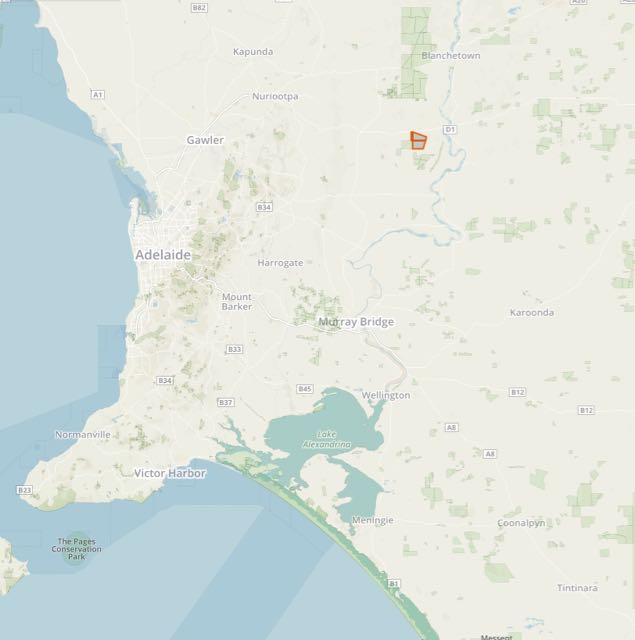 Above:- Map showing the location of the Swan Reach Conservation Park.  Map courtesy of Protected Planet.

The park covers an area of around 2,017 hectares and was primarily set asise to conserve the Southern Hairy-nosed Wombat.  Two major vegetation formations are found in Swan Reach Conservation Park.  Around 84% of the area is an open area of scrub of Mallee Box, Red Mallee and Yorrell.  The remaining 16% comprises low woodland with False Sandalwood and Bullock Bush over an understorey of Spear-grass and ephemeral herbs.

Although Occupationl Licences were issued to pastoralists in the early 1840’s and Pastoral Leases from 1851, the area south-west of Swan Reach township was not taken up.  It was not until the last decade of the 1800’s that the Swan Reach district was eventually occupied.  Swan Reach township was established in 1896, largely to cater for the small farms which were being developed in the surrounding district.

During the mid to late 1960’s, following seveeral years of devastating droughs and increasing land subdivision, there was growing public concern for the Southern-hairy nosed Wombat.  The Field Naturalists Society of South Australia approached landowners in the district and submitted various reports concerning wombats to the South Australian State Government.  It was suggested that an area of 180 square km be purchased near Blanchetown as a National Park for the conservation of wombats.  The suggestion was considered desirable, but also highly impractical as $300,000 was required to purchase the land, and this was not available. 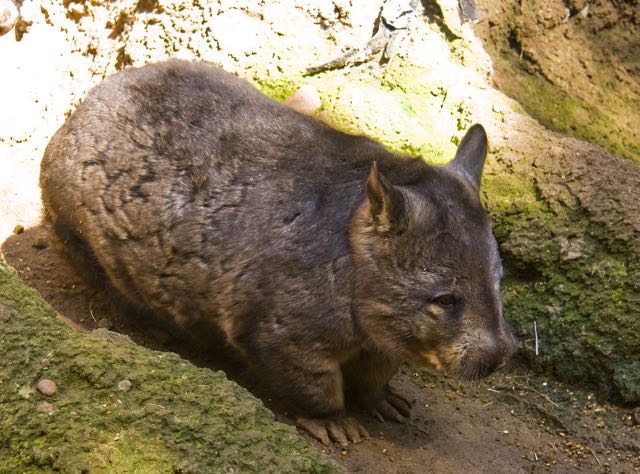 In 1972 several other land owners offered to sell land to the State Government for conservation purposes.  Sections 40-43, 57 and 58, Hundred of Fisher, comprising 1,026 hetares, south of the original park, were offered to the South Australian State Government by E.R. and R.M. Greatz in January 1972.  In September 1972 Ministerial approval to purchase the land at $3.00 per acre was given, and the land was subsequently dedicated in May 1974.

A small area of land was added to the western boundary of the park and dedicated as Section 212 in January 1979.  This brought the park up to its current day size of 2,017 hectares. 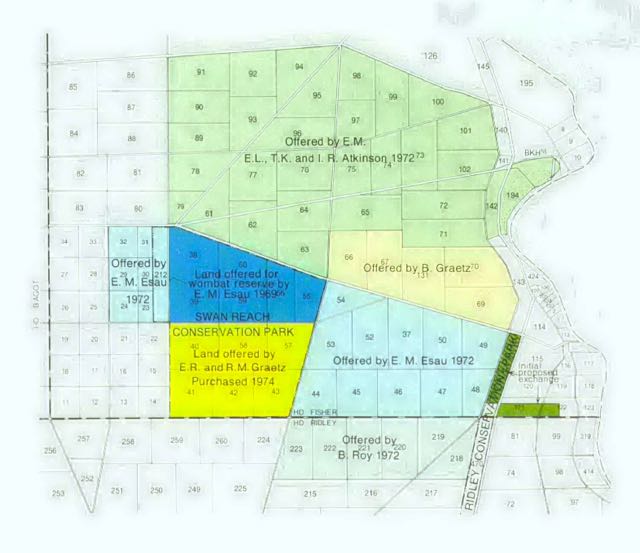 After leaving Marne Valley I turned left and headed north along Muellers Road for a few km until I reached the junction with Sleeper Track.  I then headed east until I reached the south western corner of the Swan Reach Conservation Park.  I then drove along the western boundary track of the park.  The track is very rocky in places and I would not recommend it in a conventional vehicle. 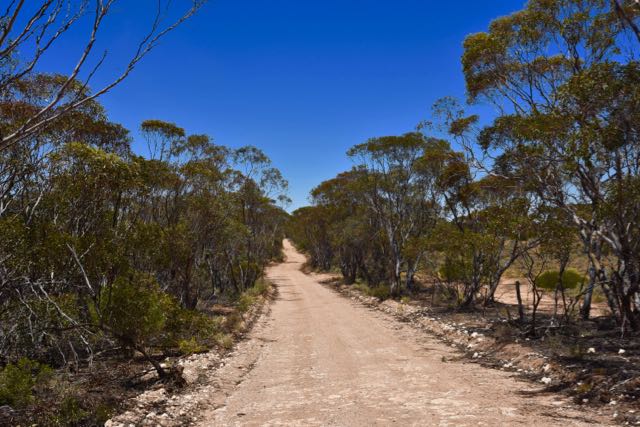 I drove a few km along the track trying to find a shady spot as it was now around 30 degree C.  But finding shade in this section of the park was not easy.  It was all quite low growing mallee, reaching about 8 metres in height.  I eventually found a spot to pull off the track which afforded a little bit of shade. 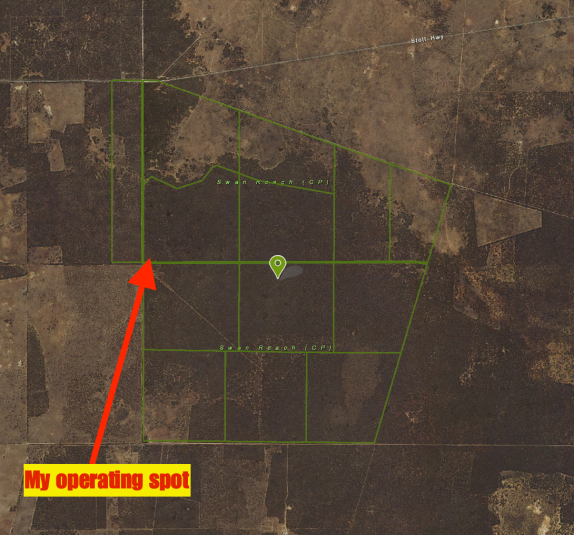 Above:- Aerial shot of the park showing my operating spot in the western section of the park.  Image courtesy of Location SA Map Viewer.

If you believe my themometer it was around 41 degree C in the sun.  And it certainly felt like that.  The park is absolutely bone dry and was nowhere near as aesthetically pleasing and as comfortable as Marne Valley.

Prior to calling CQ I tuned across the 40m band and logged a few Park to Park contacts.  They were with Ian VK1DI who was activating the Tidnbilla Nature Reserve VKFF-0989, and then Rob VK2QR who was portable in the Brindabella National Park VKFF-0054.  I then headed to 7.110 and commenced calling CQ.  My call was answered by Greg VK5GJ and Norm VK5GI who were both in the Moana Sands Conservation Park VKFF-1061.  I was very envious of them.  A beautiful beach with a sea breeze.  Certainly none of that here at Swan Reach.

I then logged a further three Park to Park contacts with Peter VK3PF/p in the Colquhoun Regional Park VKFF-0962, Allen VK3ARH in the Enfield State Park VKFF-0757, and then Bob VK5AFZ who was activating the Springmount Conservation Park VKFF-0789. 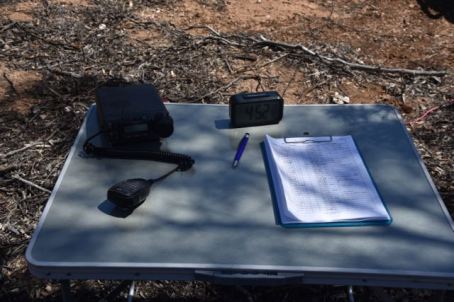 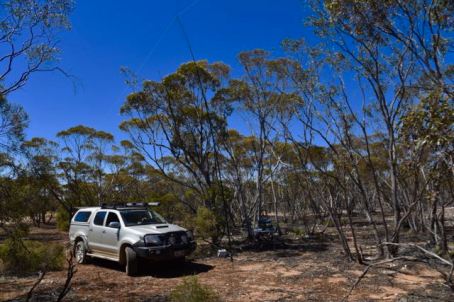 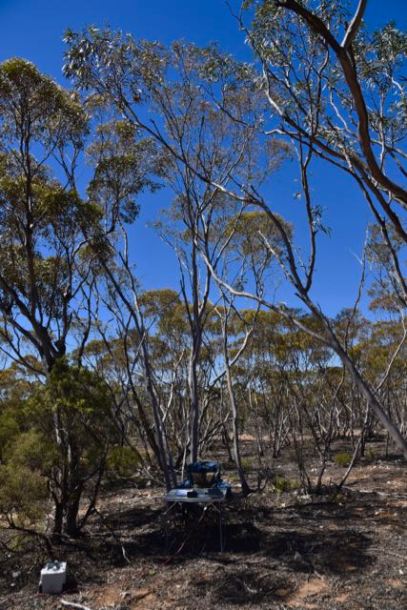 The band had picked up in activity and there were a lot of callers compared to earlier in the day at Marne Valley.  I logged a total of 54 stations on 40m from VK1, VK2, VK3, VK4, VK5, and VK7.  This included a further 16 more Park to Park contacts as follows: 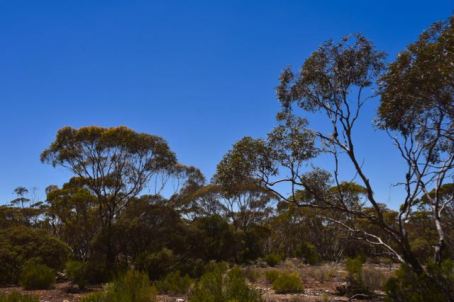 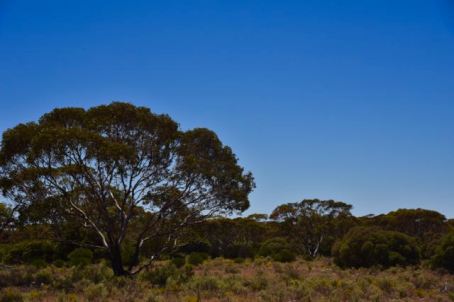 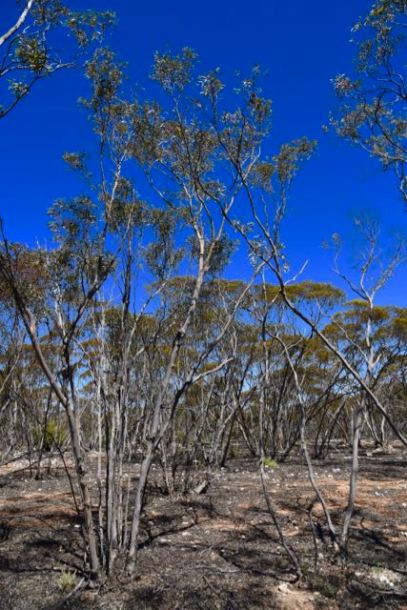 I then decided to quickly try 20m.  I had intended to give 80m and 15m a shot as well, but the heat was starting to get to me a bit, so I gave those bands a miss from Swan Reach.  On 14.310 on 20m I logged a total of 13 stations including Park to Park contacts with Gerard VK2IO/p in the Burragorang State Conservation Area VKFF-1292, Peter VK3TKK/p in the Macedon Regional Park VKFF-0972, and Tony VK3XV/p in the Lerderderg State Park VKFF-0763.  Once again, the Victorian stations were coming in extremely well on 20m.

I also worked Mike VK6MB and it was very interesting to note that Mike had a lot of echoe on his signal.  My only DX station worked on 20m was Mike ZL1JLA in New Zealand.

The heat had won, and I was well and truly over Swan Reach.  So it was time to pack up and head off to Ridley.  I had a total of 67 contacts in the log including 25 Park to Park contatcs.

At the conclusion of the activation at Swan Reach CP, I drove down towards the town of Swan Reach which is located on the other side of the Murray River.  I enjoyed the view of the mighty Murray for around 10 minutes and then headed off to Ridley. 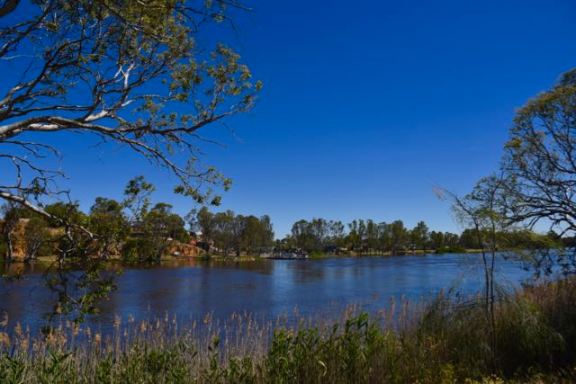 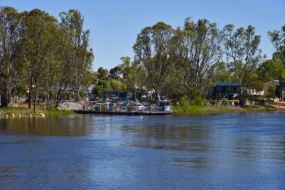 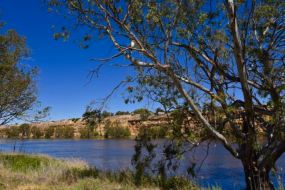 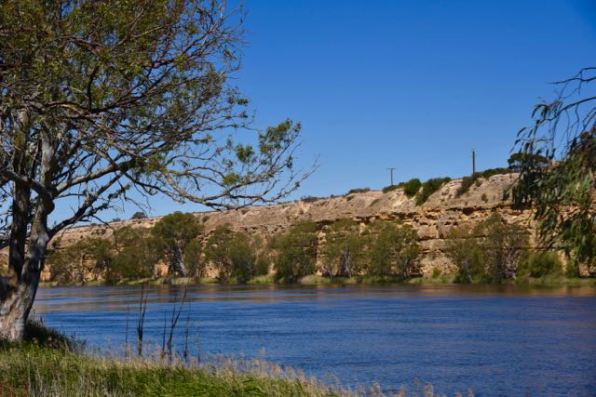 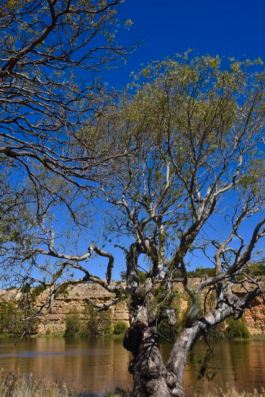