Once we got home to the homestead, I set up the equipment outside again and headed to 14.310 on 20m and called CQ.  As we had no internet coverage, I was just hoping that someone would come across my signal.  It didn’t take long and I was called by Ozren 9A7W in Croatia.  Ozren’s signal was not overly strong but we successfully exchanged 5/5 signal reports.  Next was Chris VK4BX, followed by Sasa 9A3NM in Croatia.

This was followed by a handful of Europeans from France, Poland, Italy, Slovenia, Slovak Republic, and just 2 Australians from VK8 and VK6. 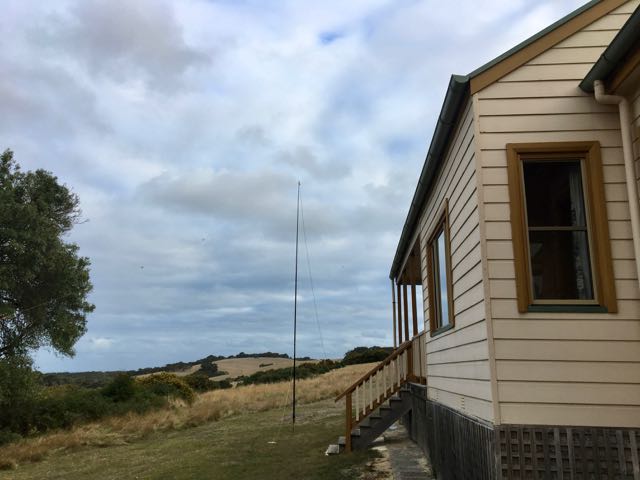 It was a pretty cool evening, only 13 deg C, so I was rugged up with my beanie and jacket.   It was a much cooler evening compared to the night earlier.  Marija was kind enough to bring my tea outside to me, and I took a break, while Marija called CQ on 7.144.  Steve VK4QQ was her first caller, followed by Simon VK3FSLG and then Ian VK1DI.  Marija logged a total of 24 stations from VK1, VK2, VK3, VK4, VK5, VK7, and New Zealand.  This included Allan VK3ARH who was on SOTA peak Mount Beckworth VK3/ VC-024 and Gary VK5FGRY who was portable in the Morialta Conservation Park 5CP-142 & VKFF-0783.  Marija was also very pleased to have her second contact into New Zealand, with Oliver ZL1XS.

After finishing tea and lighting the slow combustion heater, I started calling CQ on 7.144.  It was getting too cold for Marija, and she retreated indoors to the fire.  My CQ was answered by Marshall VK3MRG who was camping on the banks of the Upper Yarra.  This was followed by Damien VK3FRAB, and then much to my surprise, Lubos KP2AD in the American Virgin Islands.  Lubos was booming in at 5/9 plus and gave me a 5/5 which I was very happy with.   I quickly summoned Marija outside and asked Lubos if he would be so kind to listen out for Marija.  He agreed and I would the power back down to 10 watts PEP.  Much to our amazement Lubos came back with a 4/4 signal report for Marija.  We were both very excited as this was a new DXCC entity for Marija. 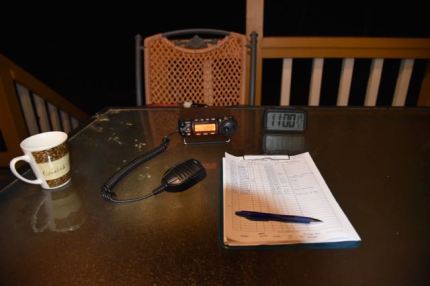 I then headed to 7.130 as I had been informed that Pedro NP4A in Puerto Rico was very loud and was working VK.  He certainly had quite a pile up going, and thanks to Mike VK2BXE who advised Pedro to have a listen out for me, I logged Pedro 5/9 both ways.

I then headed down to 3.610 on the 80m band and started calling CQ.  The Over the Horizon radar was choofing away in the background, but it didn’t take long and I had my first caller, Chris VK3YUN.  This was followed by Mark VK6BSA who had a terrific 5/9 signal.  I worked a further 6 stations from VK3, VK4, VK6, and VK7, including Tony who was on top of SOTA peak Mount Mitchell VK3/ VN-012.

I then headed back to 40m and I tuned across the band.  I heard Alberto P29LL with a huge pile up from North America.  I then heard Bill W1ZY calling CQ from Rhode Island.  He wasn’t so busy and we had a short chat, exchanging signal reports 5/9 sent and 5/7 received).  Bill was quite amazed with my operating conditions.

I then called CQ on 7.155 and worked 7 stations, including Mark AF6TC in California USA and Oliver ZL1XS, before going QRT for the evening.