After booking in to my accomodation I headed out to the Enfield State Park VKFF-0757, which is located about 28 km south of Ballarat.  It was now completely dark and a very chilly night in Ballarat.  I was also a bit hungry, but I had posted that I was going to activate Enfield, so I decided on a quick activation.

The drive from the motel took me out through Mount Helen, Scotchmans Lead and then on to Napoleans and Enfield.

Above:- Map showing the location of the Enfield State Park.  Map courtesy of Protected Planet.

Enfield State Park was established in August 1995.  It is 4,400 hectares in size.  The open forest of Enfield State Park supports a number of different types of eucalyptus including Messmate, Broad-leaved Peppermint, Narrow-leaved Pepperminth, Swamp Gum, Manna Gum, and the rare Yarra Gum.  Over 60 species of native orchids can be found in the park, and also the endemic Enfield Grevillia. The Enfield State Park, with Ballarat in the background.  Image courtesy of google maps

The park was dominated by tents and diggers from all around the world during the Victorian Gold Rush period.  A reminder of these times is reflected in local place names such as Misery Creek and Surface Point, which was the site of a Chinese settlement in the 1860s, complete with temples, tearooms, gaming tents, herbalists and market gardens. Some remains of this community can still be found in the area.

The forest has been cut for timber, fence posts and local housing materials and has also been used for the production of eucalyptus oil. A historical marker at Enfield township indicates the site of a eucalyptus distillery from days gone by. 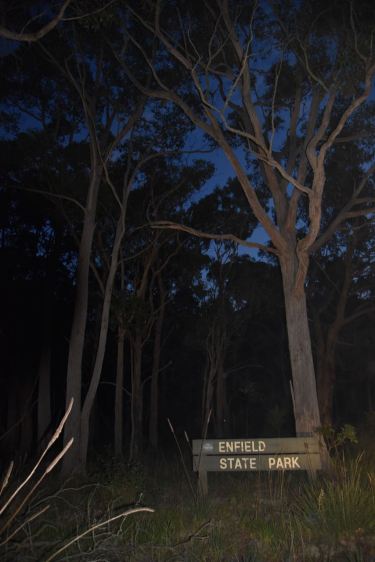 Above:- Map showing my operating spot in the Enfield State Park.  Image courtesy of Parks Victoria.

I decided to try my luck on 80m.  I lowered the squid pole and inserted the 80m section links and headed to 3.610.  I worked Ronny VK3VBI and then disaster.  The squid pole came crashing down, with a huge split detected in the first section of the pole.  So I was forced to use the vehicle equipment, the Icom IC-7000 and the Codan 9350.  As a result, signal reports were way down.  I boxed on and worked a total of 11 stations on 80m.

I was cold, hungry, and frustrated, and decided to call it quits for the night, with just 22 contacts in the log.  This is a park which I will have to return to, to get my remaining 22 contacts to qualify the park for the global WWFF program.