After packing up at Hogwash Bend, Marija and I headed off to our second planned park activation for the day, the Morgan Conservation Park 5CP-141 & VKFF-0911.  The park is located about 166 km north east of Adelaide and on the eastern side of the Murray River opposite the town of Morgan.

We travelled along the Morgan-Cadell Road, and soon passed the park on both our left and right.  Sadly, the wet weather which had been predicted, had now hit, and the shower activity was quite persistent.  Before activating the park, we headed across the Murray River on the ferry, and had some lunch at the local take away.

Morgan is a historic little town located on the banks of the Murray River, just downstream of where the Murray turns from flowing roughly westwards, to roughly southwards.  Morgan has a population of around 500 people and boasts two pubs, directly opposite each other.  The town was proclaimed in 1878, the year that the railway line from Adelaide via Kapunda was opened.  The town was named after Sir William Morgan, then Chief Secretary, later Premier of South Australia.

The town has a number of heritage listed buildings, most of which have interpretive signs displaying the history of the building.  At its peak, Morgan was the second busiest port in South Australia, behind only Port Adelaide, with six trains a day carrying freight from the Murray to the sea at Port Adelaide. 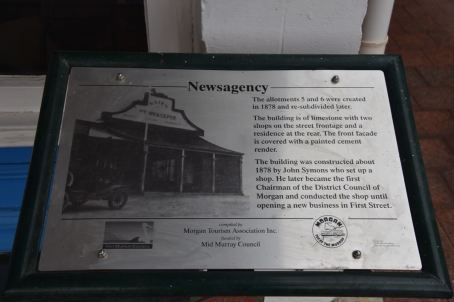 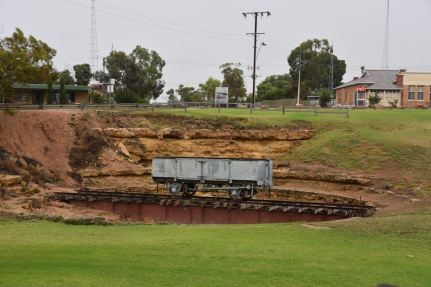 After lunch we headed to the small lookout which overlooks the town.  It was a real shame that the showers had set in.

Just down from the lookout is a memorial cairn to commemorate Captain Charles Sturt, who passed by this location during his Central Australian Exploring Expedition in 1844. 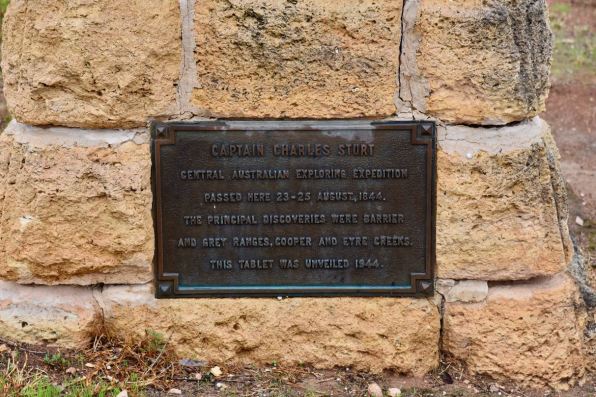 We also briefly had a look at the old Morgan Railway station and Station Master’s House, and the old Morgan wharf which at its longest, was 168 metres long. 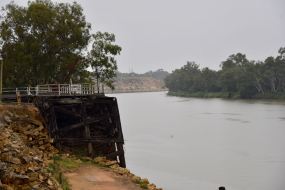 We then lined up at the ferry, and from the mobile we logged John VK5BJE/p who was activating the Lake Tyers State Park VKFF-0761 in Victoria.  John had a good 5/7 signal into the mobile, and he reciprocated with a 5/9 for us.  We crossed the ferry again and entered the park via a dirt track on the southern side of the Morgan-Cadell Road.  The park consists of a system of lagoons, swamps, creeks and Murray River anabranches bordered by majestic River Red Gum woodlands.  Morgan CP is 361 hectares in size and was first dedicated on 23rd September 1976 to protect the wetlands.  An additional 11 hectares were added on 4th November 1993. 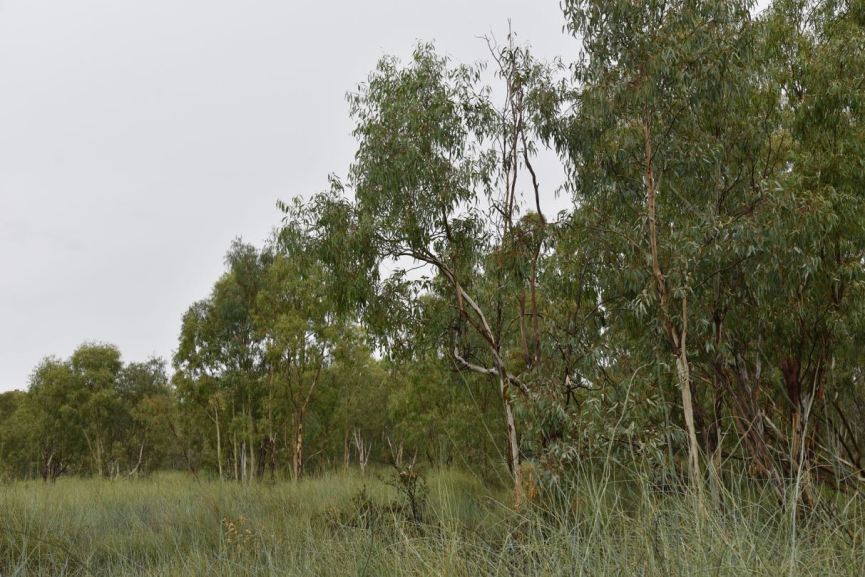 There were already two couples camping on the edge of the Morgan Lagoon, so we drove along the track a little further to the south and set up in a clearing amongst the scrub, right alongside the lagoon.  We ran the Yaesu FT-857d, initially at 10 watts PEP for Marija, and then 40 watts for me, and the 80/40/20m linked dipole, inverted vee @ 7 metres.

Aerial shot of the park, showing our operating spot in the southern section.  Image courtesy of Protected Planet.

As it was still drizzling with rain we set up underneath the awning of the Toyota Hi Lux.  Despite it being quite a miserable afternoon weather wise, it was a sensational operating spot, looking out across the Morgan Lagoon. 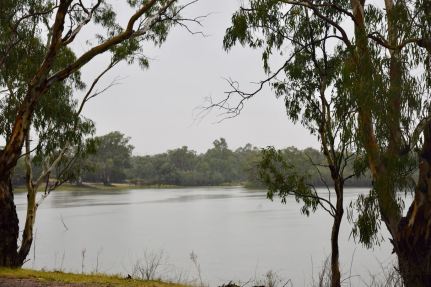 Marija started off on air first, and was just keen to get her 10 contacts to qualify the park for VKFF.  Her first 2 contacts were Park to Park QSOs with Jonathan VK7JON/p and Helen VK7FOLK/p who were activating the Hellyer Gorge State Reserve VKFF-1139.  I also logged Jonathan and Helen.

Marija then moved up to 7.150 and called CQ.  Her first taker was Michael VK3FCMC, followed by Mark VK3FOTO and then John VK5BJE/3 who was activating Lake Tyers State Park VKFF-0761.  We started to experience a little bit of European QRM and pondered on whether we should remain on the frequency of QSY.  We decided to stay and battle it out.

Marija was then called by Peter VK3TKK/p who was activating the Twelve Apostles Marine National Park VKFF-0955, and this was followed by another Park to Park (P2P) contact, this time with Derek VK3FAFC/p who was in the French Island National Park VKFF-0622.  Marija and I swapped the mic to log the P2P contacts.

Marija had 16 contacts in the log and had qualified the park for VKFF.  She kindly handed the mic over to me. 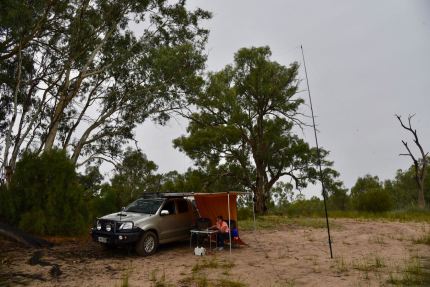 I called CQ on 7.150 and this was answered by Damien VK3FRAB, followed by Geoff VK3SQ, Lee VK3FLJD, and then Steve VK3FSPG/VK3MPR.  Despite it being a holiday, it was quite slow going on 40m, with just a steady flow of callers from VK2, VK3, VK4, and VK7.  No VK5’s appeared in the log at this stage, with close in propagation on 40m, again not working.

About 30 contacts into the activation and OZ8BV came onto the frequency and started calling CQ.  He was a strong 5/8 and at times was drowing out some of the VK callers.  I battled on for a few more minutes, but with 36 contacts in the log I decided it was time to QSY up to 7.135.  I there spoke with Nick Vk3ANL/p who was on SOTA peak Mount McKay VK3/ VE-007.  Marija also logged Nick.

With a total of 40 contacts in the log I decided to try my luck on 3.610 on the 80m band.  First taker there was Roy VK5NRG in Adelaide with a strong 5/8 signal (5/8 received).  This was followed by Les VK5KLV at Port Augusta.  It was nice to log some VK5’s.  But despite the 80m band being open around South Australia, they were the only VK5 callers.  I logged a further 4 stations on 80m from VK2 and VK3.  Contact number 44 for me was the ever reliable Mick VK3GGG from western Victoria.

I then QSYd to 14.310 on the 20m band and called CQ.  Sadly the only station logged there was Bill VK4FW in Queensland.  No DX.

I had my 44 contacts and it was time for me to do a bit of bird watching/photography, of the feathered variety.  I encouraged Marija to try her luck again on 40m to see if she could pick up 44 contacts.  Whilst I was off on my walk, Marija managed to add a further 11 stations to her log from VK2, VK3, and VK4.  Unfortunately the magical number of 44 wasn’t reached, with numerous CQ calls going unanswered. 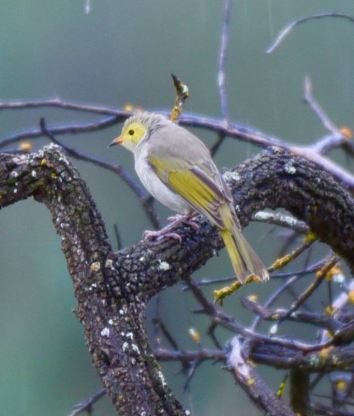 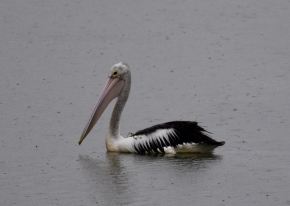 Marija and I packed up and hit the road.  It was 4.00 p.m. local time and we wanted to call into the Mount Mary Hotel for a drink.  We still had a 2 hour drive to get home.

After packing up, we crossed the ferry again and headed west on the Thiele Highway.  We stopped briefly at the old Eba railway siding.  In days gone by Eba had its own school, a post office, blacksmith, grocery store, sawmill, and even a race track.  Today little remains.  Sadly, a sign of the times……someone has stolen the lady cutout from the old railway siding. 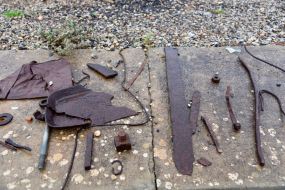 We continued on to the little town of Mount Mary, formerly Krichauff and then Beatty,  which is located on the Thiele Highway between Eudunda and Morgan.  The town was originally surveyed in 1883 and features the historic Mount Mary Hotel.  We stopped in for a couple of drinks.  This is a must if you are driving through the area.  The pub is currently for sale and the current owners did their best to try to convince me to buy the pub. 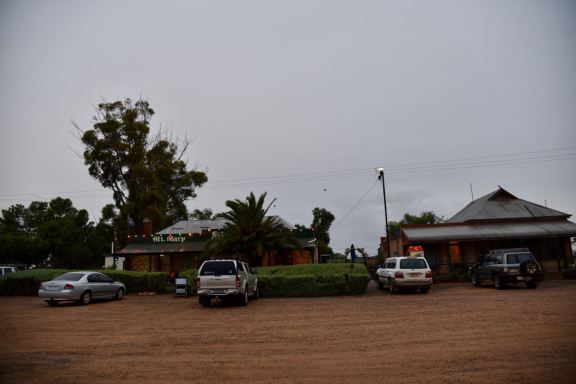 We continued on our way home, travelling along Bower Boundary Road, a dirt road between the Thiele Highway and the Sturt Highway.  It was very slow going as there were kangaroos everywhere.  Along the way I chatted with a number of stations from the mobile including Peter VK7PRN, Peter VK2STO, John VK6VZZ/m and Mark AF6TC.  We stopped off at the Mount Pleasant Hotel for a meal and then drove the final 45 minutes back home.  It was the end of a very enjoyable 4 days away.