I had a day off today (Saturday 29th July 2017) after a few afternoon shifts, and despite it being a rather unpleasant day outside, I decided late in the morning to head over to the Charleston Conservation Park 5CP-041 & VKFF-0777.  The park is just a short 23 km drive by road from my home, and about 46 km east of Adelaide. 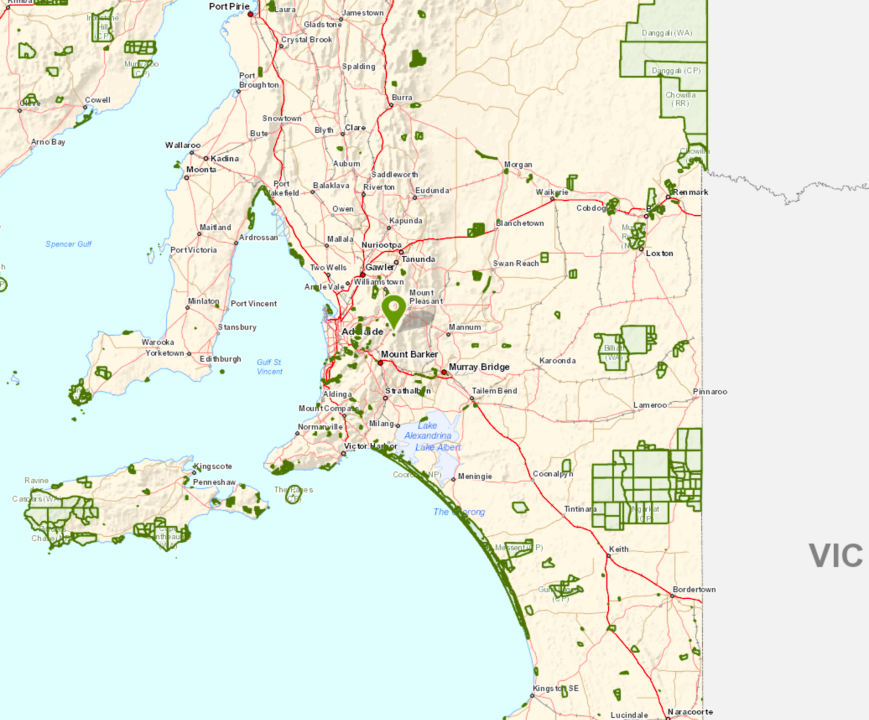 Above:- Map showing the location of the Charleston Conservation Park in the Adelaide Hills.  Map courtesy of Location SA Map Viewer.

I have activated the park many times previously, so today’s activation was mostly for the recently released Boomerang Award in the VKFF program, which encourages park activators to head back to the same park.

Aerial shot showing the park, with my QTH to the left of the shot.  Adelaide is in the background.  Image courtesy of Google maps.

Charleston is 54 hectares in size and was first proclaimed on the 8th April 1976.  Most of the habitat within the park is Woodland with either Manna Gum or Rough-barked Manna Gum over Golden Wattle.

The park is located about 8 km east of the little town of Charleston, which was laid out in 1857 by Charles Dunn (1796–1881), a brother of the prominent miller John Dunn.  It is believed the town was originally known as “Charlestown”, but the current spelling has always been more common in newspaper reports. 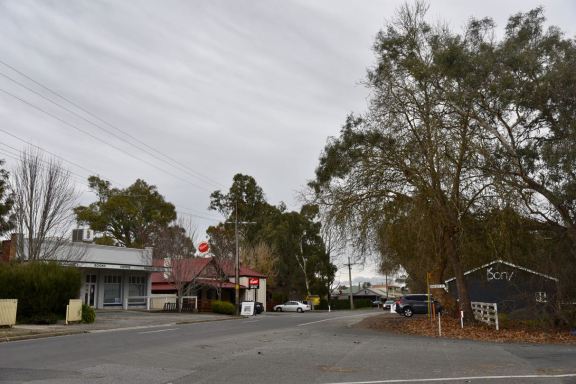 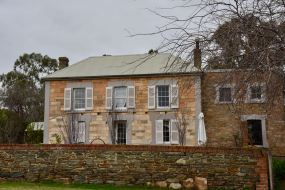 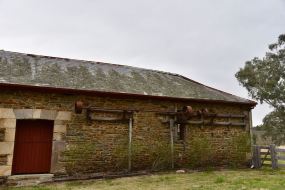 I travelled along some of the ‘back roads’ to get to the park.  As it is winter, the countryside was beautitful and green. 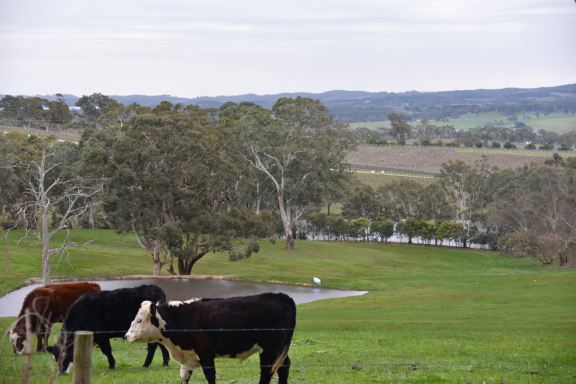 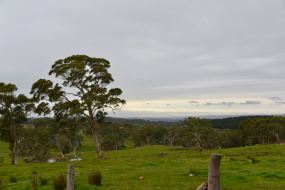 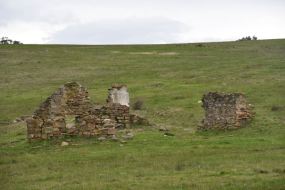 I soon reached the park on Bell Springs Road.  This is the only way to access the park.  There is a small car parking area at gate one.  As I was pulling up at the park I worked Gerard VK2JNG who was portable in the Kwiambal National Park VKFF-0274 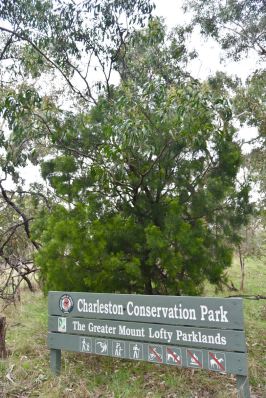 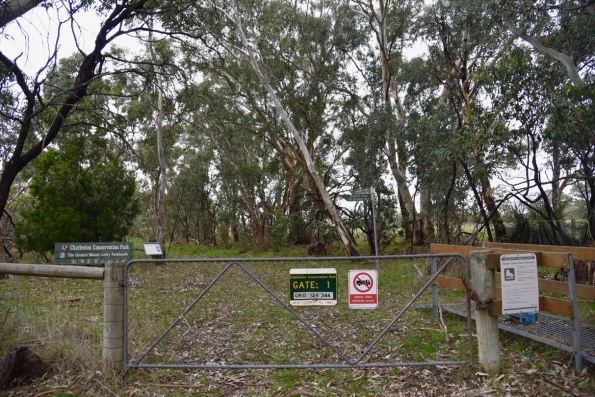 I set up on the boundary track on the western side of the park.  My usual portable gear was used for this activation: Yaesu FT-857d, 40 watts, and the 20/40/80m linked deipole, inverted vee @ 7 metres. It was incredibly windy with a very nasty storm front approaching from the west.  As a result it took me a little longer than normal to get set up, as I continually got the antenna caught up in the branches of the gum trees.  I headed to 7.144 hoping to get a Park to Park with Gerard VK2JNG, but there was silence.  I asked if the frequency was in use and I was very pleased to hear Gerard come back to me to advise that he was waiting for me.  I logged Gerard who was an excellent 5/9 signal.

I then headed down to 7.139 and asked if the frequency was in use, with Dennis VK2HHA coming back to advise that it was all clear.  I logged Dennis, followed by Peter VK3PF, Marija VK5FMAZ, and then Rick VK4RF/VK4HA.  Despite it being a weekend, there was not the normal flurry of callers.  More like a constant flow.  Contact number 10 was with Steve VK7CW after 10 minutes of being on air in the park.

I had 24 contacts in the log when I was approached by 2 bushwalkers and a young child.  They showed great interest in what I was doing.  Thanks to those who patiently waited whilst I was chatting and explaining the hobby to them.  They were extremely amazed hearing such strong signals coming in from interstate. 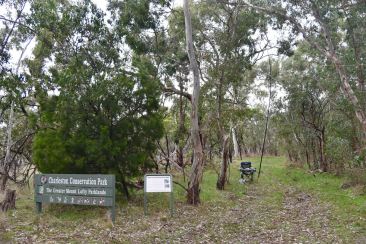 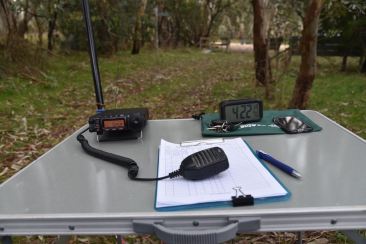 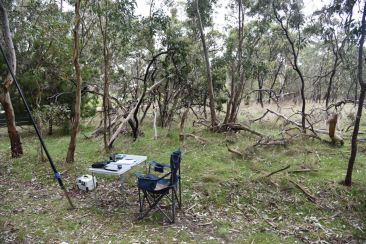 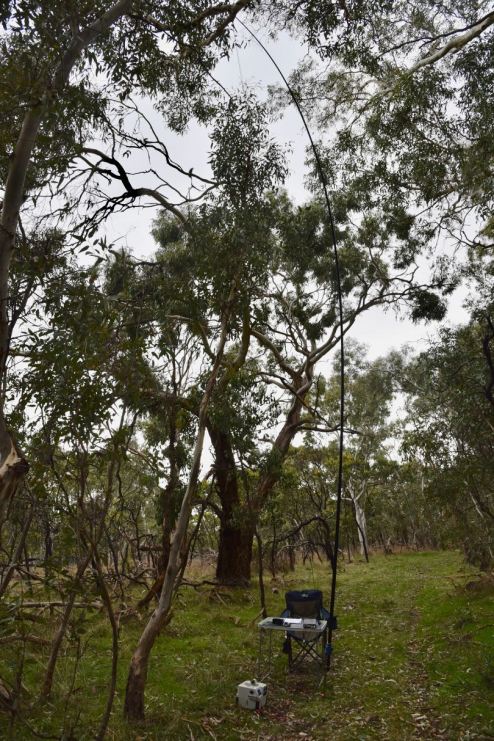 When things slowed down a little I took the opportunity of heading down to 7.090 where I had seen a spot on parksnpeaks for Matt VK1MA/2 on a SOTA peak.  When I first heard Matt he was a good 5/7, but within a minute I had almost lost him.  Sadly I wasn’t able to make contact with Matt.  So I headed back up to 7.139 where I logged a further 4 stations.

As I had very few callers I headed back to 7.090 where I managed to get through to Matt after a few goes.  I was hearing Matt okay at 5/3, but he was struggling with my signal, 3/3, at his end.  But we made it.

I then headed off to the 20m band where I called CQ after self spotting on parksnpeaks.  Unfortunately my only contact on 20m was with Anthony VK6MAC in Western Australia.

The weather was moving in fast, so I decided to try my luck on the 80m band.  I called CQ and received a call from Geoff VK3SQ at Beechworth.  I was able to hear Geoff quite well as there was no noise in the park, but sadly Geoff was unable to hear me.  First in the log on 80m was my wife Marija VK5FMAZ, followed by Tony VK5MRT, and finally David VK5PL.

I decided to have one last listen on 40m before calling it quits for the day.  Unfortunately I couldn’t get back onto 7.139 as there were some stations there already, and I had to go up to 7.150 as one of those stations was very wide.  I logged a further 4 stations including Owen VK2AEJ/p at the Cape Don lightship in Sydney.  The MV Cape Don is a former lighthosue tender, now a museum ship in Waverton in New South Wales. 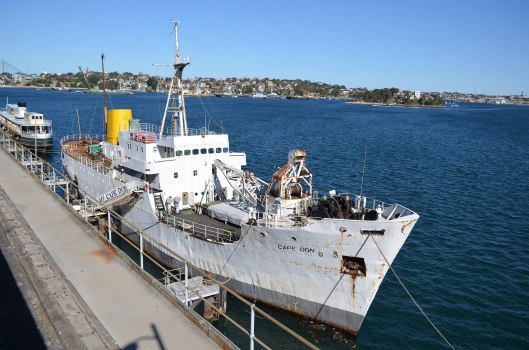 Above: the MV Cape Don.  Image courtesy of wikipedia

It was time to go QRT as I was just starting to experience some drops of rain.  I had a total of 44 contacts in the log.

After packing up I went for a walk along the boundary track on the western side of the park.  I highly recommend this, as the park becomes very picturesque as you get further into the park.  I came across a few fenced off areas in the park and some other marked out areas.  Not sure what they were for? 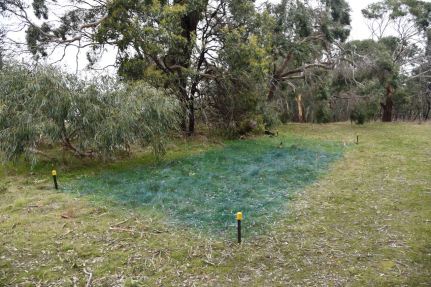 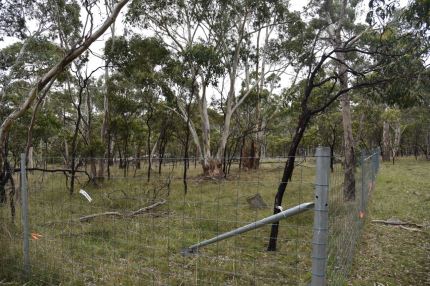