We were now nearly 2 weeks into our trip and day 13 (Thursday 16th November 2017) had really crept up on us quickly.  Today we had a 157 km drive from Lakes Entrance to Traralgon.  I was a little sad to leave Lakes Entrance, as I had really enjoyed the stay there in the cabin.  Our trip would take us back down the Princes Highway into Bairnsdale, then Stratford, Rosedale, and on to Traralgon where we had arranged to stay for one night.

Above:- Map showing our travels on day 13 from Lakes Entrance to Traralgon.  Map courtesy of google maps

We had two planned park activations for the day and then a dinner at night at one of the local pubs in Traralgon with some of the local amateurs.  Our first activation of the day was the Tarra Bulga National Park VKFF-0480, which is about 240 km east of Melbourne and about 33 km south of Traralgon.

Above:- Map showing the location of the Tarra Bulga National Park.  Map courtesy of google maps

Once we got to Stratford we took a bit of a break to stretch our legs.  We stopped to have a look at the memorial to commemorate the crossing of the Avon River at Stratford by the explorer Angus McMillan in 1840. 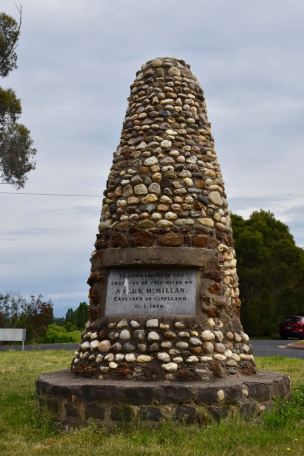 We then drove into Sale and quickly drove out to the Royal Australian Air Force base, just outside of the town.  The base opened as a training base in April 1943 and was initially the home to No. 1 Operational Training Unit (1 OTU), equipped with Bristol Beaufort light bombers.  Following World War II, the RAAF Central Flying School was relocated from RAAF Base Point Cook to East Sale in 1947.  About 700 personnel work at the base.

We then drove south on the Traralgon-Balook Road, enjoying some very nice views.  The weather was still warm and very humid.  But storms were brewing, and we were a bit worried that we may not be able to get our second park activation in.

We soon reached the north western corner of the Tarra Bulga National Park, which was well signposted.

Tarra Bulga National Park is quite a large park, comprising 1,522-hectares (3,760-acres) of the last remnants of indigenous eucalypt forest which once covered the region.  The undisturbed mountain ash forests, fern gully communities and associated Myrtle Beech stands within the park are of considerable biogeographical significance.

The area was first set aside as Bulga National Park in 1904, comprising 20 hectares (49 acres).  In 1909 Tarra Valley National Park was designated nearby, with 303 hectares (750 acres) reserved.  Over the years the two parks were gradually enlarged and then merged as the Tarra-Bulga National Park, and proclaimed on 17th June 1986.

The rainforest in the park is a haven for plants and native wildlife, and is particularly well known for its giant mountain ash trees and lush fern gullies.  There are a wide variety of birds residing in the park including the pilotbird, yellow tailed black cockatoo, eastern whipbird, and currawongs.  In the evening possums, owls and bats emerge to feed.  Lyrebirds, wombats, swamp wallabies, gliders and platypuses can also be found within the park. Above:- The Tarra Bulga National Park, showing our operating spot at the Visitor Centre.  Map courtesy of Protected Planet.

Marija and I headed for the visitor centre.  We weren’t quite sure if this was going to be a viable place to operate from because of the throng of tourists we expected to be there.  But once we arrived we were surprised to see just 2 cars in the car park, and the lawned area in front of the visitor centre was completely free.  And there were a number of wooden tables and benches.

The only other occupants on the lawn were a large number of Crimson Rosellas.  In fact dozens of them.  And they were very tame.

Once again, Marija and I swapped the microphone until Marija had logged 10 stations and qualifying the park for the VKFF program.  Marija started calling CQ and this was answered by Greg VK5GJ, followed by Peter VK3PF, and then Julie VK3FOWL who was using the School Amateur Radio Club Network call of VK3SRC.  Next was a Park to Park contact, with Garry VK2GAZ/p who was activating the Murramarang National Park VKFF-0371.  Just 3 QSOs later Marija had contact number 10 in the log, with a QSO with Michael VK3FCMC.

Whilst I continued to operate, Marija went for a walk along the Ash Track and through the forest to the suspension bridge.  And Marija was in for a treat.  She photographed a female Superb Lyrebird.  These birds are noted for their elaborate tail and excellent mimicry.  The Superb Lyrebird has an extraordinary ability to accurately mimic a huge variety of sounds. Lyrebirds are shy and difficult to approach, so Marija did particularly well in getting some photos. 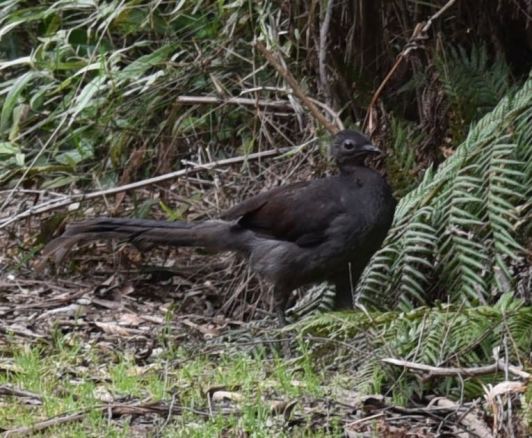 During the activation I had a number of rosellas land on the table in front of me.  They appeared completely unphased by the radio and the noise. 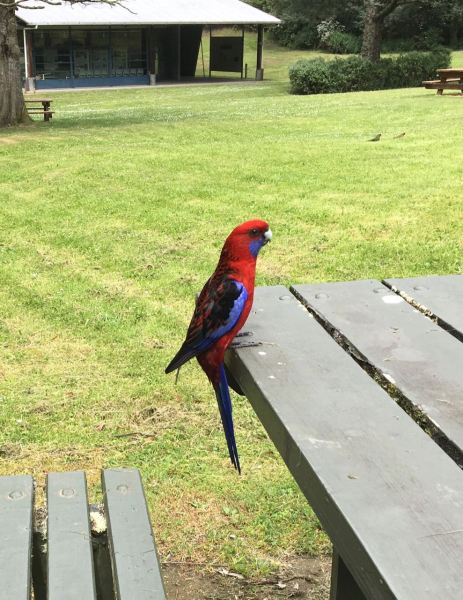 This was another activation where we were able to promote the hobby, with Marija engaging with a few members of the public, explaining the hobby of amateur radio and the parks program.

Once we packed up Marija and I took a walk along the Ash Track to the Corrigan suspension bridge which stretches through the rainforest canopy.

Sadly I was not able to spot a Lyrebird like Marija.  But I did spot a number of other birds including Yellow-tailed Black cockatoos, Pied Currawongs, and Crescent Honeyeaters. 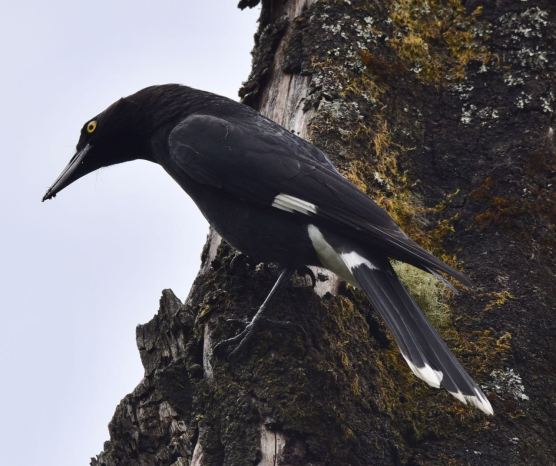 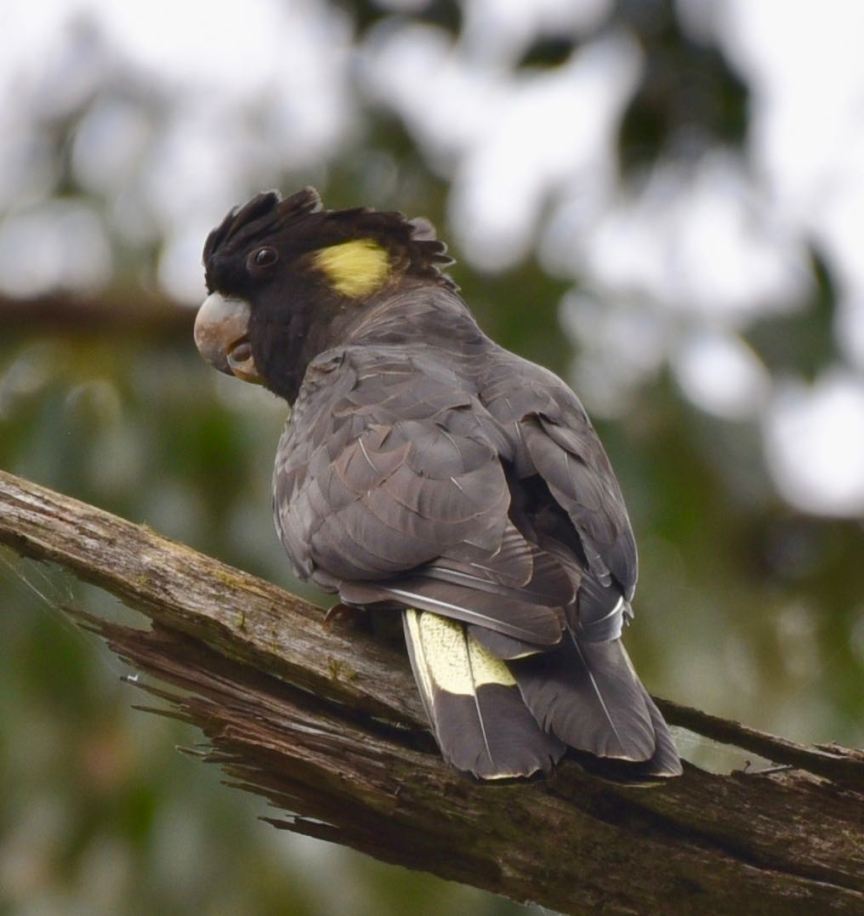 There are some huge Mountain Ash trees here in the park.  The Mountain Ash is the tallest flowering plant in the world.  The tree show below in the photograph is 75 metres tall, and is only two thirds the size of the largest recorded Mount Ash.  However, it still stands as one of Victoria’s oldest trees

We then made our way back to the vehicle and started making our way to our next activation, the Morwell National Park, admiring the amazing views of the countryside.  Our only issue was that the weather was starting to roll in, with some very black clouds in the sky.

This is also an active forestry area and we encountered a number of log trucks on our way back to Traralgon.