Today (Sunday 9th June 2019) and yesterday (Saturday 8th June 2019) I took part in the 2019 VK Shires Contest.  This is an official contest of the Wireless Institute of Australia and counts towards the Peter Brown Contest Champion Awards.  The objectives of this contest are for amateurs around the world to contact as many VK shires as possible in the contest period.

The map below shows my day one travels on Saturday.  It was a trip north into the southern part of the Barossa Valley, and then back into the Adelaide Hills.  I was fortunate in that the weather was fine.

Above:- Map showing my travels on day one on Saturday.  Map courtesy of Plotaroute.

And the map below shows my travels on day two on Sunday.  This was a trip down south to the Fleurieu Peninsula.  Sadly, the weather was poor, and a lot of time was spent under the bothy bag to get out of the rain.

Above:- my travels on day two on Sunday.  Map courtesy of Plotaroute.

I used the following equipment during each activation:-

I entered into the Rover category.  A Rover station is a VK station who goes either portable or mobile for the entirety of the contest and activates more than one shire.  To be considered as a roving station you must activate a minimum of 2 shires.

The vast majority of those contacts were from VK, but I did work one French station on 40m, and made 13 New Zealand contacts.

Above:- Graph showing my contacts during the contest.  Courtesy of meta-chart.com

The map below shows my QSOs during the contest.  As you can see, the one single European contact into France.

Above:- Map of the world showing my contacts during the VK Shires Contest.  Courtesy of QSOMap.org

I found the bands to be in reasonably good shape, all except for 20m which yielded very little contacts.

Above:- My VK & ZL contacts during the contest.  Courtesy of QSOMap.org

As this was a contest I was unable to self spot.  Us park & SOTA activators probably take the parksnpeaks website for granted.  Because there is no doubt, that when you are not spotted, the number of callers dramatically decreases.  I spent long periods calling CQ on the 80m band and the 20m band without many callers.  The ‘regular’ park hunters didn’t appear as there was no spot on parksnpeaks.

It is permissible though for others to spot people they work during the contest.  However, as a contest participant I cannot ‘Arranging or confirming any contacts during or after the contest by use of ANY non-amateur radio means such as telephones, Internet, instant messaging, chat rooms, VoIP, email, social media or web sites.‘  For those who did spot me, I say a BIG thankyou. 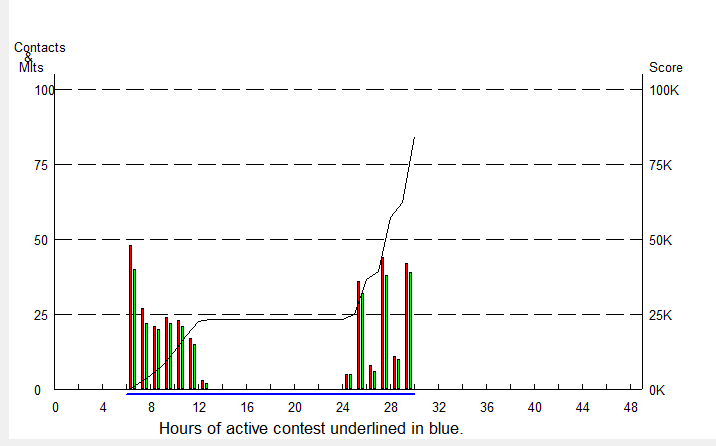 Above:- Graph showing my hours active during the contest.  Graph courtesy of VK Contest Log.

Above:- Graph showing the number of contacts per band during the contest.  Courtesy of meta-chart.com

The 40m band proved reliable as always.  As there was no man-made noise in any of the parks I was able to hear a pin drop.  It was evident though that some of the home stations were suffering from noise which is an ever-increasing problem in the hobby.

Above:- Graph showing my contacts on the 40m band.  Graph courtesy of VK Contest Log.

Most of my activity on 80m was on Saturday night as the graph below shows.  But I did make some good contacts on 80m during the day as well. 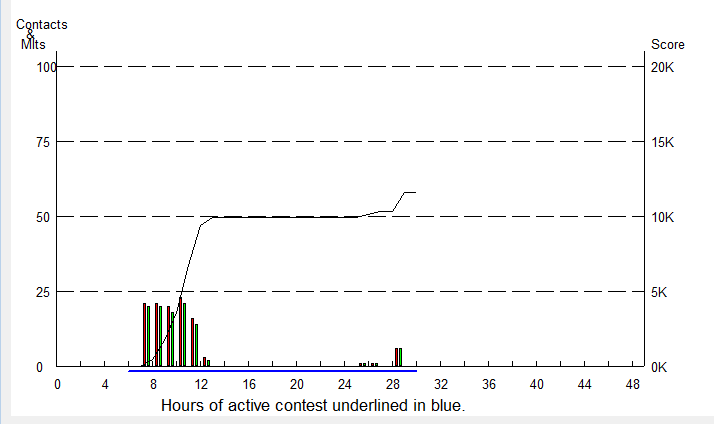 Above:- Graph showing my contacts on the 80m band.  Graph courtesy of VK Contest Log.

The 20m band proved a real flop for me.  I only worked a handful of VK4 & VK6 stations on that band.

ABove:- Graph showing my contacts on the 20m band.  Graph courtesy of VK Contest Log.

I made a total of 14 Park to Park contacts during the contest.

I worked the following Park to Park from Wiljani Conservation Park:-

I worked the following SOTA station from Scott Conservation Park:-

I worked the following Park to Park from Scott Conservation Park:-

I worked the following Park to Park from Mount Billy Conservation Park:-

I worked the following Park to Park from Mount Billy Conservation Park:-

Many thanks to everyone who called me, and thanks to those who spotted me.