Our first park for our weekend away was the Mirampiram Flora Reserve VKFF-2387, which is located about 17 km (by road) north of the town of Kaniva in western Victoria.  This was the first time that the park had been activated.

Above:- Map showing the location of the Mirampiram Flora Reserve VKFF-2387 in western Victoria.  Map courtesy of Protected Planet.

Marija and I left home on Saturday morning (3rd August 2019) bright and early.  We were on the road by just after 6.00 a.m.  We had a 313 km drive ahead of us before reaching Mirampiram.  Our first stop for the day was at Coonalpyn where we filled up with some hot coffee and a bacon & egg sandwich at the Silo Cafe.  We then continued east along the Dukes Highway and soon reached the South Australian/Victorian State border.

The Mirampiram Flora Reserve takes its name from the locality of Mirampiram or Miram-Piram in the County of Lowan in western Victoria.  The park is not to be confused with the Mirammpiram Bushland Reserves which are four separate reserves located to the north and south of the Flora Reserve. Above:- An aerial view of the Mirampiran Flora Reserve, looking east.  Image courtesy of Google maps.

The tiny town of Miram which is located on the Adelaide-Melbourne railway line, about 10 km northeast of Kaniva was named after the locality of mripiram later expressed as Miram Piram.  It was shortened to Miram in 1904.  Miram is an Aboriginal word for the bough of a tree.

European settlement commenced in the area during the 1870s.  In 1884 a school was opened.  In 1887 the railway from Dimboola to Serviceton was extended and this resulted in the expansion of the district’s farming activity.  Prior to this the district’s wheat crops were carried to Dimboola or South Australia by road wagons.

In 1888 Miram’s first store was opened by George Coles (1833-1866).  His son, Sir George James Coles, was the founder of the national variety stores chain, G.J. Coles and Company.   In April 1903 the Miram store was acquired by Philip Wheaton.  It was operated by the Wheaton family up until 2000.

The store was more than a grocery store.  It also stocked drapery, footwear, millinery, glassware, menswear, timber, hardware, iron, motor oils, and even wireless receivers.   It provided an electricity supply for the town and a permanent water supply.  Fresh eggs were sold from the Wheaton’s poultry farm, fresh milk from their Friesian dairy herd, cream & butter, and a meat supply from their beef herd.  The store also served as a Post Office. 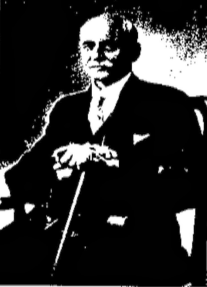 George Coles. Image courtesy of ‘Wimmera Way back when’

The old store at Miram. Image courtesy of ‘Wimmera Way back when’

In 1890 an Anglican church was opened in Miram, with the Wheaton family running a Methodist Sunday school for nearly 50 years.  In 1914, a public hall was built and in 1939 silos were built near the railway station.  The 1950s started to see the demise of Miram.  In 1952 the Miram school was closed with children being bussed to the Kaniva Consolidated School.  In 1960 the Anglican church close, followed by the Methodist church in 1964.

On some maps the park may show as the Mirampiram Nature Conservation Reserve.  It is located on Sandsmere Hall Road, a few hundred metres east of the Broughton Road intersection.  The park is a small piece of remnant scrub which is surrounded by cleared farming land.

Above:- Cleared farming land on the southern side of the park.

The park contains Jumping-jack wattle which is only found in the southern part of mainland Australia, with patchy distribution in the Wimmera area of western Victoria and some adjacent areas of South Australia. 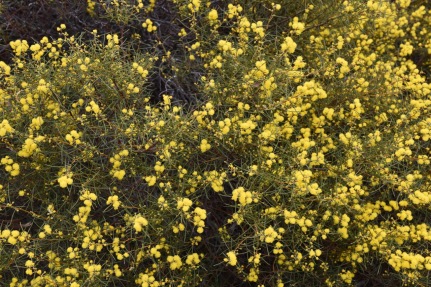 Although the park is only small, it was alive with birdlife during our visit.  Whilst Marija was on air I snuck away for a walk through the park and took some photographs of birds observed in the park.

Marija and I travelled east on Sandsmere Hall Road and soon reached the park, which is not signposted.  We parked near the eastern boundary of the park and set up in the southeastern corner of the park.

We ran the Yaesu FT-857d and the 20/40/80m linked dipole for this activation.  I ran 30 watts output, whilst Marija ran her 10 watts PEP abiding with her Foundation licence conditions.

We were set up and ready to go by just after the UTC rollover.  It was around 10.00 a.m. Victorian local time.  After turning on the transceiver we found Ian VK1DI/2 on 7.144 calling CQ from the Sappa Bulga National Park VKFF-1180.  Marija and I both logged Ian for a Park to Park contact.

I then moved down the band to 7.139 and Marija placed a spot up for me on parksnpeaks whilst I started calling CQ.  John VK7FJFD came back to my CQ call, followed by some of the park regulars Adam VK2YK, and Rick VK4RF.  Within about 12 minutes I had qualified the park for VKFF, with contact number ten being with John VK4TJ using his Canadian callsign.  I logged a further 4 stations before swapping the mic with Marija.

Marija started calling CQ on 7.139.  Rick VK4RF was the first to come back to her CQ call, followed by Lee VK2LEE, John VK4TJ, and then Adam VK2YK.  It only took Marija about 7 minutes to get ten contacts in the log, thus qualifying the park for VKFF.  Contact number ten was with Terry VK2MTJ.

Marija went on to work 14 stations from VK2, VK3, VK4, and VK7.  It was clear that there was no obvious propagation into South Australia on 40m from our spot in western Victoria.  And our only Victorian contact was a local VK3 station.

I jumped back into the operator’s chair and called CQ again on 7.139.  It was hard going as there was no real propagation to VK3 and VK5.  I logged a further 9 stations from VK1, VK2, and VK4.  The biggest signal logged was Tex VK1TX in Canberra with a big 5/9 plus signal.

Marija and I then lowered the squid pole and inserted the links for 80m and headed for 3.610 hoping to get some VK3 and VK5 stations in the log.  Marija spotted me on parksnpeaks and I started calling CQ on 3.610.  John VK5BJE in the Adelaide Hills came back to my call, followed by Peter VK3PF, and David VK5PL.  All signals were strength 9.  Although the 80m band was again proving to be very reliable, I only had 7 callers.

I then moved to the 20m band and started calling CQ on 14.310, competing at times with the Over the Horizon Radar which was strength 9 plus when it came on.  First in the log on 20m was Rob VK4SYD/p who was activating the North Pine Dam Nature Refuge VKFF-2876.

I now had 32 contacts in the log and required another 12 contacts to qualify the park for the global WWFF program.  I headed back to 40m and worked Mark VK4SMA/p on 7.144 who was in the Lockyer National Park VKFF-0719.  This was followed by Andrew VK1DA/2 and Wade VK1MIC/2 who were activating SOTA summit VK2/ SW-027.  Marija also logged Andrew and Wade.

It didn’t take me long and I soon had contact number 44 in the log, a QSO with Ray VK4NH.  I logged a total of 52 contacts before callers dried up.  It was now just after 11.30 a.m. local time and it was time for us to pack up anyway and head off to our next park.

Between us, Marija and I had logged 71 stations including 7 Park to Park contacts.  It ahd been a good start to our trip.