Our third and final park for Saturday (9th November 2019) was the Murray Sunset National Park VKFF-0373.  This was to be our first park for the 2019 Keith Roget Memorial National Parks Award weekend.

The Murray Sunset National Park is located about 500 km north-west of Melbourne.

Above:- Map showing the location of the Murray Sunset National Park in north-western Victoria.  Map courtesy of Protected Planet.

After leaving Gnarr Flora & Fauna Reserve we drove back into the town of Underbool and headed west on the Mallee Highway until we reached Linga where we took Pink Lakes Road.  We headed north and about 18 km up the road we reached the park.  Pink Lakes Road is dirt but it is suitable for a 2WD vehicle. 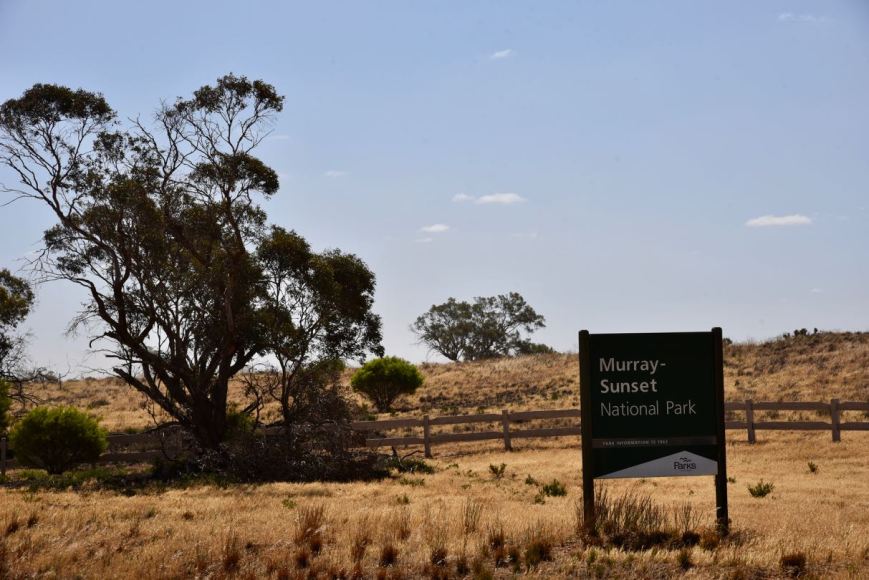 We drove into the park and travelled along Pink Lakes Road passing Lake Hardy.  The lake is made of solid salt and due to the presence of red algae called Dunaliella saline, the lake often gives off a brilliant rosy-pink colour. 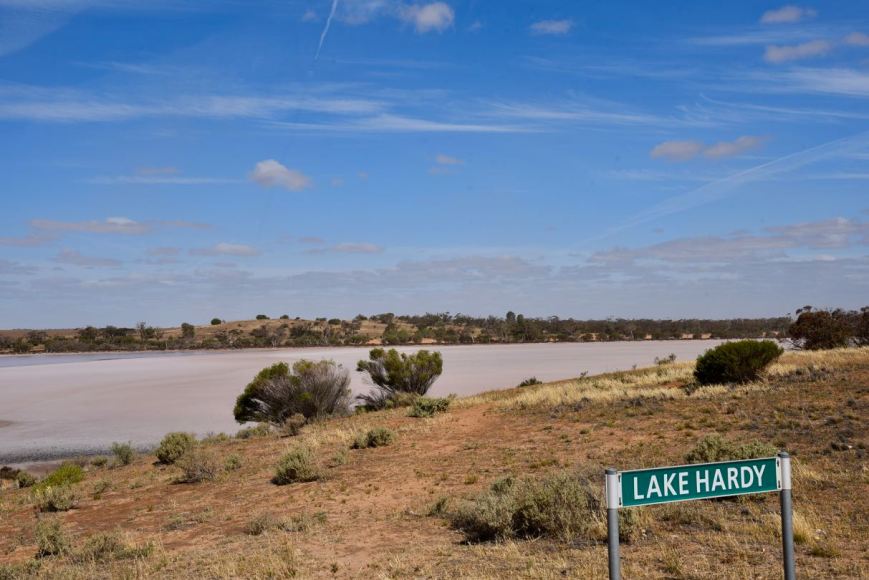 The Murray Sunset National Park is the second-largest National Park in the State of Victoria.  The park is about 633,000-hectare (1,560,000-acre) in size and was proclaimed on the 26th day of April 1979.  The park is located in the north-western corner of Victoria and borders South Australia to the west and the Murray River to the north.  The Sturt Highway passes through the northern section of the park.  The majority of the park is in a remote area between the Sturt Highway and the Mallee Highway, west of the Calder Highway. Above:- Map of the Murray Sunset National Park.  Map courtesy of Parks Victoria.

The majority of the park lies within the Murray-Sunset, Hattah and Annuello Important Bird Area (IBA), which was identified by BirdLife International due to it containing mallee habitat supporting a number of threatened mallee bird species, including the Mallee-fowl, Black-eared Miner and Mallee Emu-wren.  Over 600 species of plants have been recorded in the park, and 300 species of birds.

We travelled the short distance to the main campground at Lake Crosbie.

Above:- A map of the Pink Lakes area of the park showing our operating spot.  Map courtesy of Parks Victoria.

Although there were a number of caravaners and campers there, our favourite shelter shed was free and was the ideal spot to operate from.  It was a very warm afternoon, so the shelter provided some valuable relief from the afternoon sun.

At the campground, you can find the Kline-loop nature walk which is 4.8 lm in length (takes about 2 hours).  The walk is named after Jim Kline who was a worker who lived and worked in the area during the 1930s and 1940s.  The walk follows the shore of Lake Crosbie and across pine-woodland rises to the picturesque Lake Kenyon. 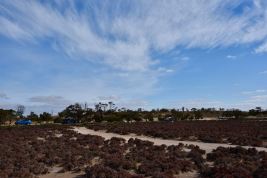 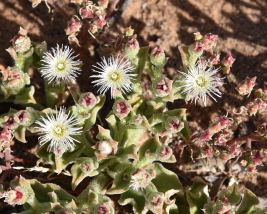 Prior to calling CQ we tuned across the 40m to see if we could find some other park activators.  We found Nik VK3ZK/p on 7.139 calling CQ from the Dandenong Ranges National Park VKFF-0132.  Unfortunately, he was the only park activator we were able to hear, so I headed up to 7.150 and started calling CQ.

First in the log was Keith VK3MKE, followed by David VK5DWC, and then Linda VK7QP.  The 40m band was in very good condition and it didn’t take long for a mini pile up to commence.  I logged a total of 31 stations in a very short space of time, including the two further Park to Park contacts with Peter VK3PF/p in the Mitta Mitta Regional Park VKFF-0974, and Gerard VK2IO/p in the Cattai National Park VKFF-0092.

As I had qualified the park now for VKFF, I took the opportunity of telling all stations to stand by and swapped the mic with Marija.

Marija’s first contact was with Peter VK3PF/p in the Mitta Mitta Regional Park VKFF-0974, followed by Mike VK5FMWW, Scott VK4CZ, and then Paul VK3DBP.  It didn’t take long before Marija had ten contacts in the log and the park qualified for VKFF.  Contact number ten was with Greg VK2EXA.

Marija logged a total of 22 stations before handing me back the mic.

I again called CQ on 7.150 and logged a further 10n stations before callers dried up.  I now had 42 contacts in the log and was just 2 short of the 44 required to qualify the park for the global WWFF program.  I headed over to the 20m band where I logged 3 stations: Scott VK4CZ, Mark VK4SMA, and Murray VK4MWB. 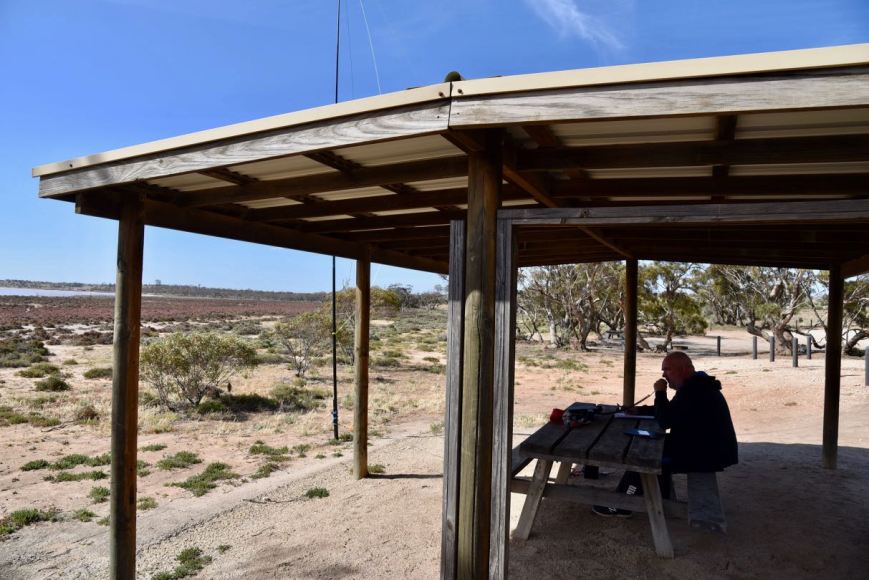 After packing up Marija and I decided to have a drive along Pioneer Drive.  We have done this before, but it is a very nice drive through the park.

We stopped briefly to have a look at the outdoor salt museum on the eastern side of Lake Crosbie.   There was once a thriving commercial salt industry here, which commenced in 1916 and concluded in 1979 when the area was declared as a State Park. 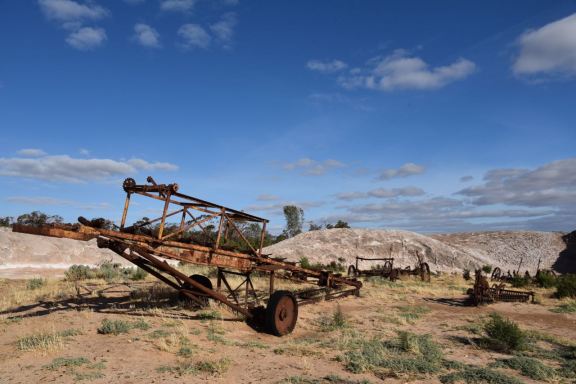 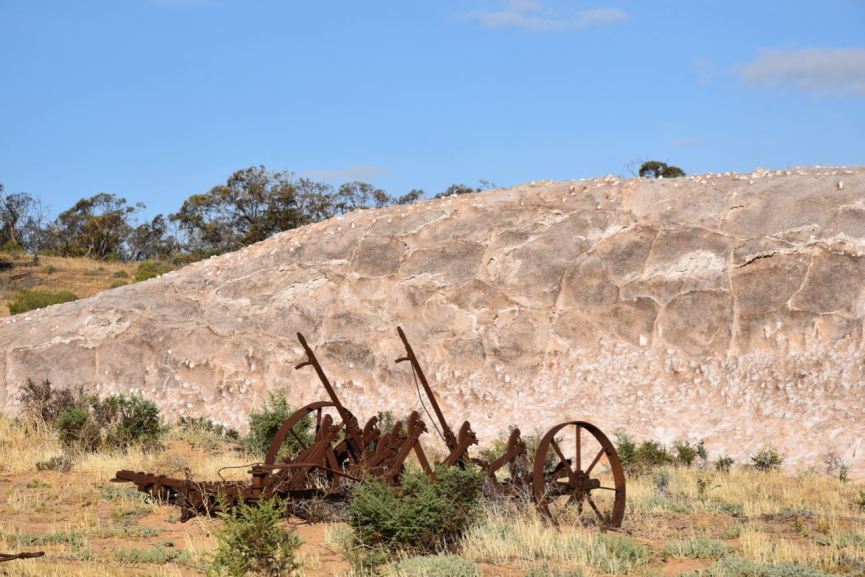 Lake Crosbie is the largest of four large salt lakes in the Pink Lakes area of the Murray Sunset National Park.

We then stopped at Lake Kenyon which was named after A.S. Kenyon who was appointed engineer-in-charge of improvements to the northern Mallee. 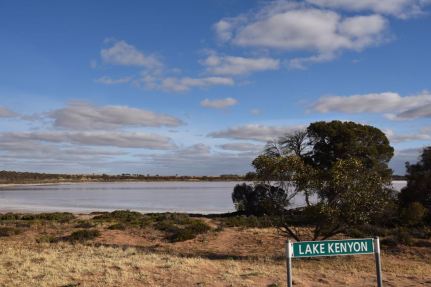 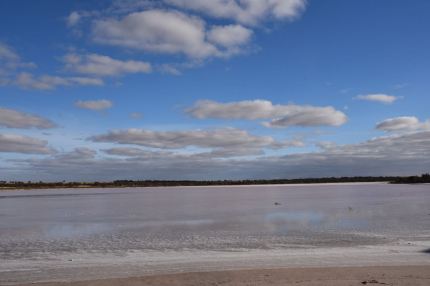 A little further along the drive are a number of interpretive signs which detail the history of salt mining within the park.  During the 1920s and 1930s there was a small township at this location for the salt workers and their families.  This included houses, a school, and Otto the cook’s underground house.  Seasonal workers and local farmers also came on foot or by bicycle, horse, or car to work on salt harvesting.  Camels carried sale to the railway at Underbool and Linga.  A short-lived tramway was constructed but later abandoned and replaced by trucks.  Salt was shovelled into bags weighing up to 180 pounds (abt 60 kg) and loaded onto trucks by hand.  Very little remains today. 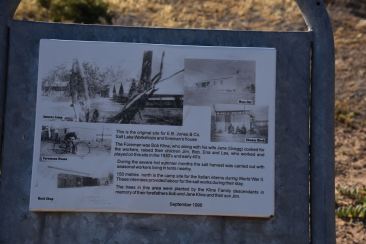 We then drove back to Murrayville and went out for tea at the local pub.  We then headed back to the caravan park where Marija had an early night.  I stayed up and watched Die Hard for about the 20th time before heading off to bed.