It was now day two (Sunday 10th November 2019) of our trip to Victoria for the 2019 KRMNPA Activation Weekend.  Our plan was to activate two Flora & Fauna Reserves for WWFF, and then activate the Wyperfeld National Park for the KRMNPA weekend.

Our first park for the day was the Kattyoong Flora and Fauna Reserve VKFF-2346.  The park is located about 13 km north of the little town of Torrita on the Mallee Highway in north-western Victoria.

This was the first time that the park had been activated.

Above:- Map showing the location of the Kattyoong Flora and Fauna Reserve in north-western Victoria.  Map courtesy of Protected Planet.

After leaving the cabin at the caravan park we headed to the Cobb & Co Cafe in Murrayville for some breakfast.  Whenever we are in the area we always stop here.  It is good food and good coffee.  The owner is friendly and coincidentally his two sons live in our home town of Mount Barker.

Above:- Marija enjoying some breakfast at the Cobb and Co Cafe at Murrayville.

We left Murrayville after breakfast and headed east on the Mallee Highway.  Our first stop was the little town of Cowangie.  If you are travelling along the Mallee Highway, take the time to detour into this little town.  Cowangie is the birthplace of motorsport legend Larry Perkins.  He is a former racing driver and V8 Supercar team owner. 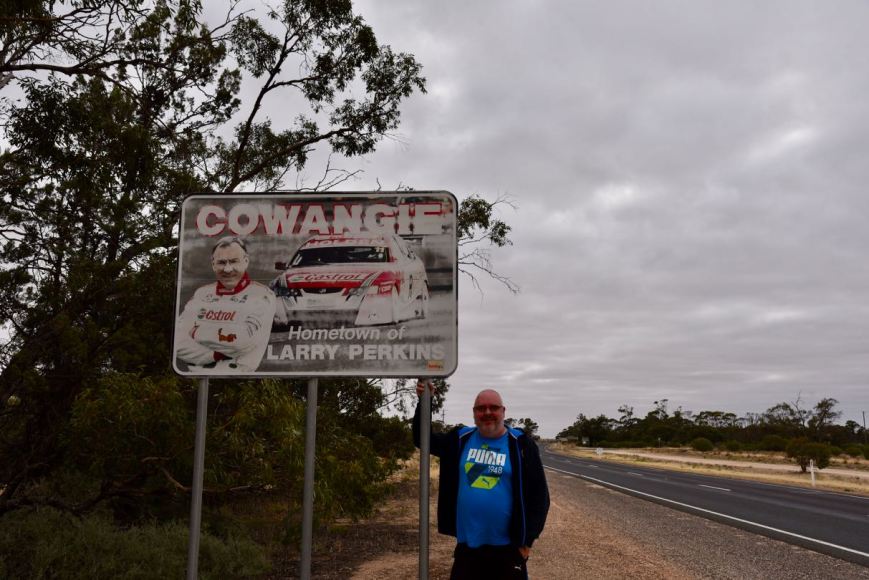 The Cowangie Post Office opened in July 1912 and was originally known as Kow Plains until 1913.  The Post Office closed in 1994, and not much else remains in Cowangie from its heyday.  The nearby Kopw Plains homestead is well worth a visit.  However, we did not do that on this trip as we have visited there previously.

Above:- an old shop in the main street of Cowangie.

One of the buildings worthwhile having a look at whilst in Cowangie is the old Bush Nursing cottage.  At a meeting of the Cowangie Bush Nursing Centre in August 1917, it was moved that a two-roomed stone cottage be erected so the nurse could live in more comfort and afford privacy to patients.  The cottage was completed in 1918.  The Cowangie Bush Nurse Centre ceased operation in 1924. 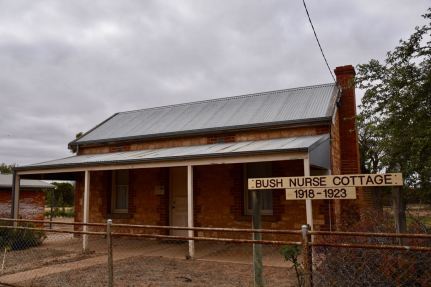 Another interesting place is the Cowangie Bakery which opened in 1912.  The bakery closed in 1952 and in 2001 was restored. 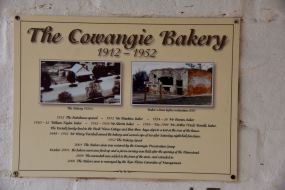 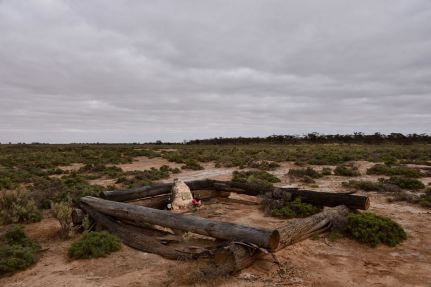 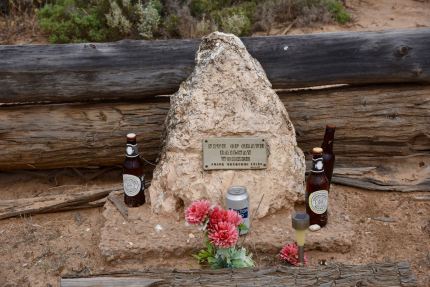 The highway was quite busy with trucks as this is the main highway between Adelaide and Sydney.

We then stopped briefly at the small town of Underbool.  The town name is thought to come from the German word underbolt given to it by surveyor Dr Neumayer when he camped there in October 1861.  A post office opened on 15 July 1912 when a regular mail service was provided by the opening of the railway from Ouyen to Murrayville a month earlier.  In 1913 a school and public hall were built, while in 1917 a Bush Nursing Centre was established.  By 1918 there were numerous stores and business in Underbool. 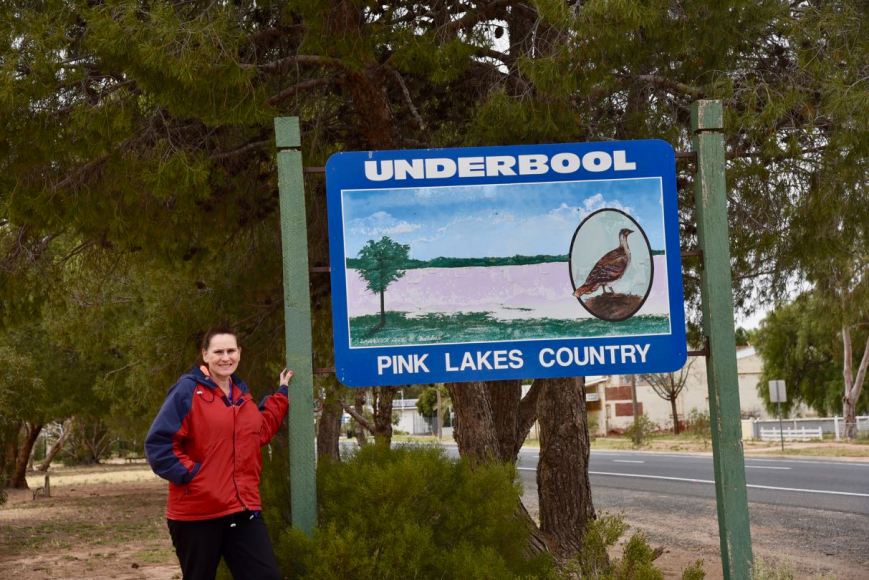 The Underbool Hotel was built in 1925 and boasted a large formal dining room, public bar, pool room and accommodation.  Sadly it closed in December 2016.

Above:- The old Undeerbool Hotel.

There are a few things of interest in the town.  One of those being an old mallee scrub roller which was made from a large steam engine boiler with a heavy timber framework attached.  It was used to clear the mallee scrub and was adapted to be used behind a crawler tractor.  It was in use until the early 1960s.

The Pioneer and Early Settler Memorial is in honour of the pioneers of the district.  There is also a replica of the train used by Sailor Salt Co. to transport salt from Lake Becking to the Linga Railway Station in the 1920s. 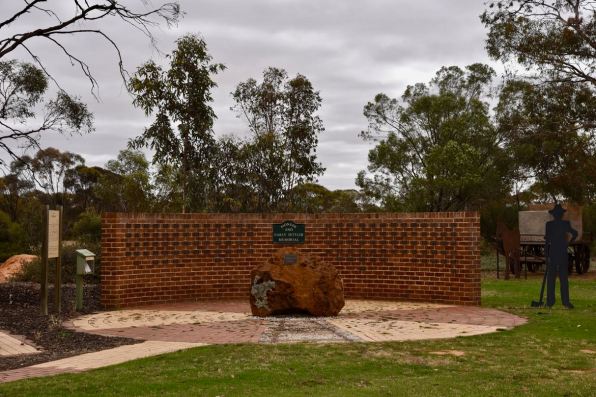 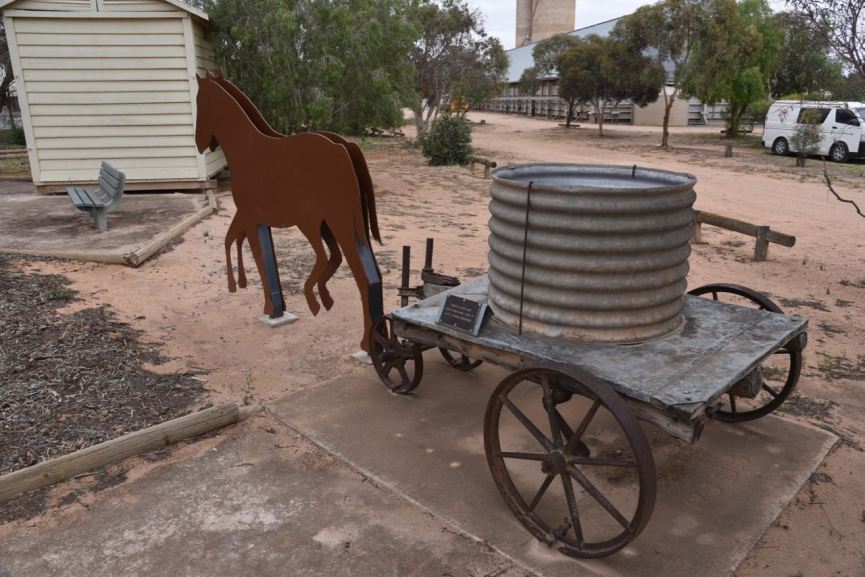 You can also view Underbool’s police cells that were decommissioned in 2002. 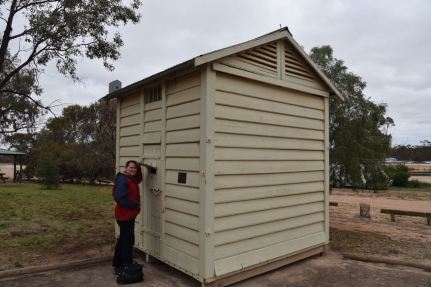 We continued on to the little town of Torrita (don’t blink, you will miss it) and then turned left onto Stones Road and then right onto Cheesmans Road and then left onto Cooke Road.  The park is located at the corner of Cooke Road and Joyce Road.  It is not be confused with the Kattyoong Bushland Reserve which is located nearby. Above:- An aerial view of Kattyoong Flora & Fauna Reserve, with the Kattyoong Bushland Reserve close by.  Image courtesy of Google maps

The Kattyoong Flora and Fauna Reserve is 39 acres in size and was established in 1990.  It comprises typing mallee scrub. 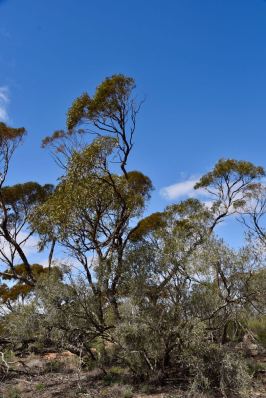 During our visit to the park, we observed numerous Rainbow Bee Eaters.  They are  a strikingly brilliant bird.  Rainbow bee-eaters mostly eat flying insects, but, as their name implies, they have a real taste for bees.

Marija and I could not find a suitable access point into the park on Cooke Road.  We did, however, find a 4WD track leading into the park on Joyce Road.  There was plenty of room to string out the 20/40/80m dipole antenna.

Above:- An aerial view of the Kattyoong Flora & Fauna Reserve showing our operating spot.  Image courtesy of Protected Planet.

As this was a Sunday morning, the broadcasts for the Wireless Institute of Australia (WIA) were in full swing, so I was not able to get onto 7.144.  I found 7.120 clear and started calling CQ.   Ken VK3ALA was first in the log, followed by Tony VK5TT with an exceptionally strong signal, and then Mark VK3PI.

Sadly I started to experience QRM from a VK4 station who came up on frequency, unannounced, and started calling CQ DX.  Despite being told by numerous stations that the frequency was in use, he continued to call CQ DX.  I apologise to anyone who was calling who I missed, as the interference was strong.

I persevered and eventually, he got the message and moved off frequency.  I logged a total of 30 stations including three further Park to Park contacts with Peter VK3PF in the Chiltern Mount Pilot National Park VKFF-0620, and Joe VK3YSP/p & Julie VK3FOWL/p in the Brisbane Ranges National Park VKFF-0055.

I then swapped the mic with Marija. 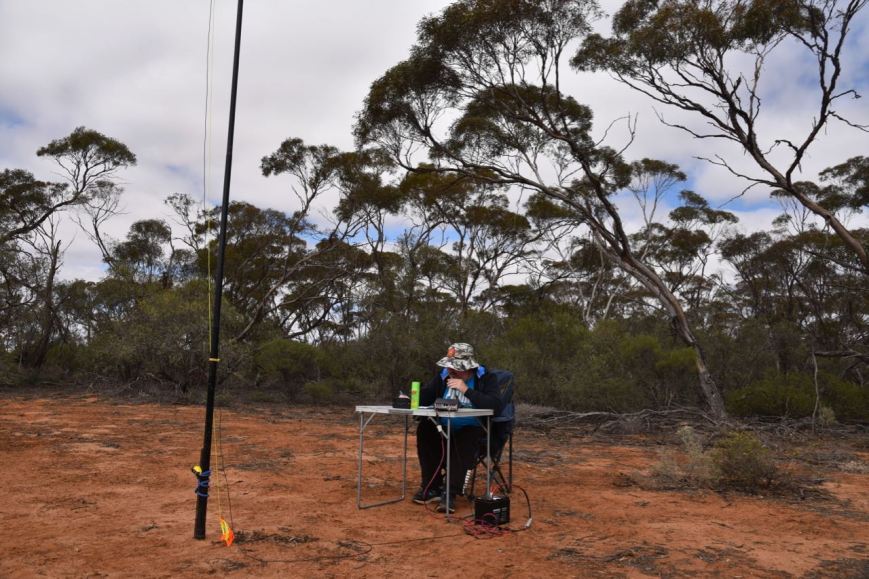 I then called CQ once again on 7.120 and logged a further 23 stations including Park to Park contacts with Peter VK3PF/p in the Chiltern Mount Pilot National Park VKFF-0620 (a new contact on a new UTC day), and Gerard VK2IO/p in the Berowra Valley National Park VKFF-1162.

Marija then called CQ on 3.610 for about 5 minutes, but there were no takers.

We packed up and headed off to our next park, the Timberoo Flora and Fauna Reserve.