Our third park for Sunday (11th November 2019) was the Wathe Flora & Fauna Reserve VKFF-2480.  This would be only the second time that the park has been activated for the World Wide Flora Fauna (WWFF) program, and the first time that it had been activated by Marija and me.

The park is located about 40 km north-west of the city of Melbourne. 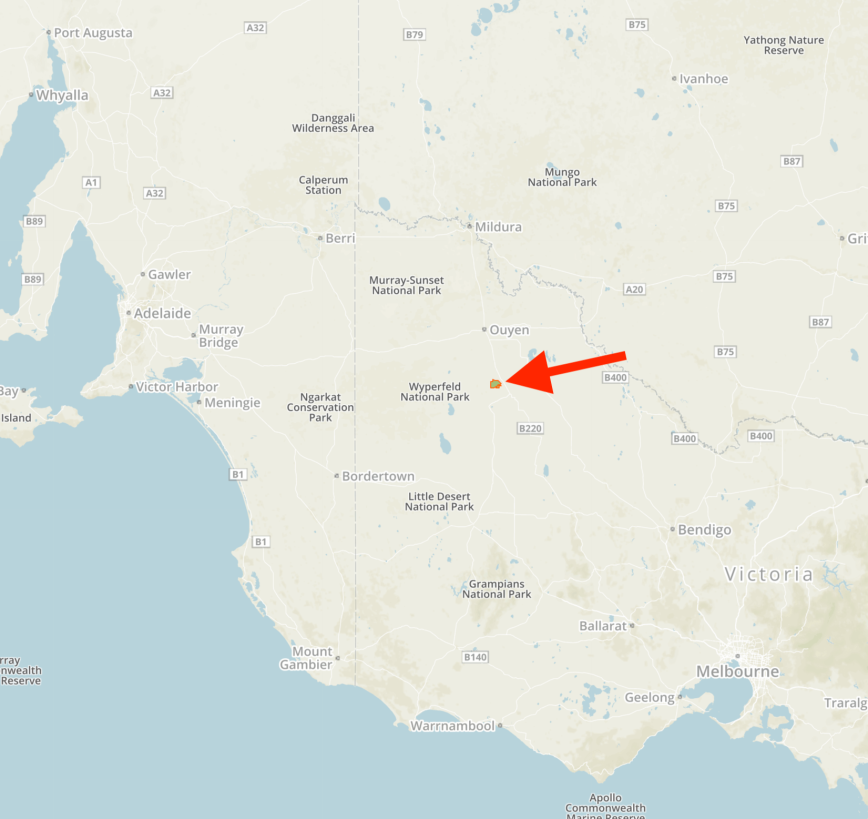 Above:- Map showing the location of the Wathe Flora and Fauna Reserve.  Map courtesy of Protected Planet.

We accessed the park via Wathe Reserve Road which runs off the Sunraysia Highway.  This ‘road’ travels through farmers paddocks to the park boundary where you will find a set of unlocked gates.

You can continue on the other side of the gates.  Depending on which maps you look at, the sandy track is either referred to as Wathe Reserve Road or Clay Road.  It was a hot day and the track was very sandy and boggy.  We decided not to go deep into the park. 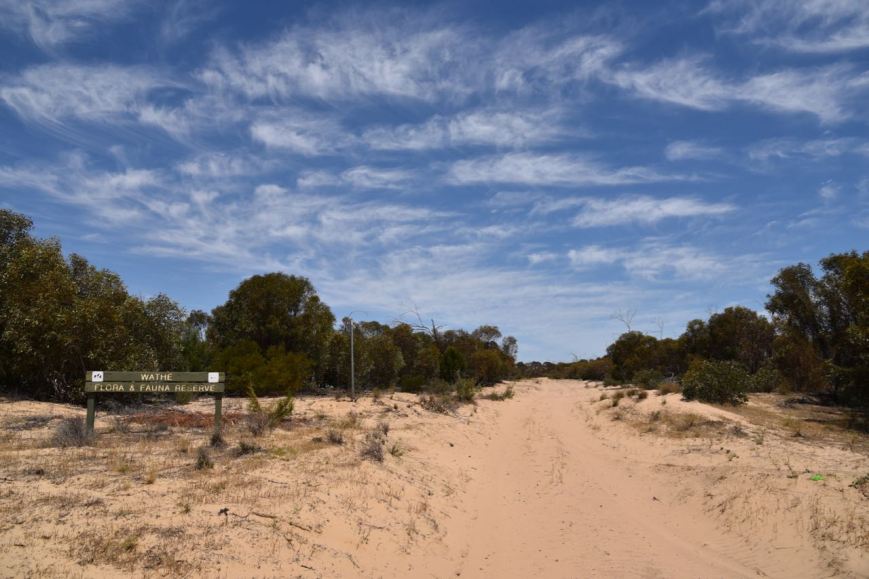 Above:- Clay Road (or Wathe Reserve Road) which dissects the park.

This is a large park consisting of 14,816 acres of remnant mallee country.  The reserve was established in 1979.

The reserve is surrounded by cleared farming land. 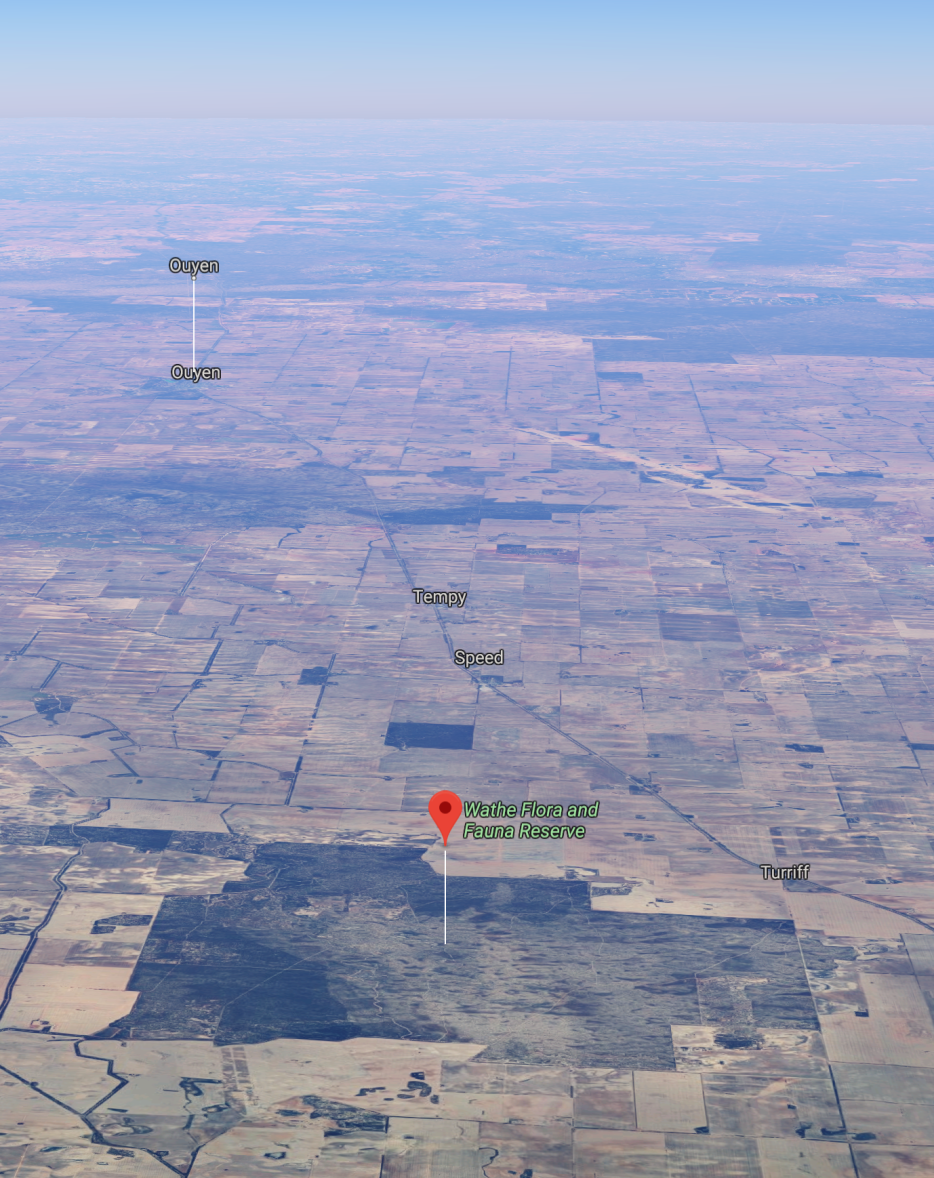 Above:- An aerial shot of the park looking north.  Image courtesy of Google maps.

During our visit to the park, we spotted some Songlarks (I think) and White-fronted Chats.

We set up on the northern side of Clay Road on the western boundary of the park.  There was plenty of room here to string out the 20/40/80 m linked dipole and just enough shade to get out of the hot sun.

Above:- An aerial shot of the Wathe Flora & Fauna Reserve showing our operating spot in the eastern section of the park.  Image courtesy of Protected Planet.

For this activation, Marija and I decided to stay to her 10 watts PEP Foundation level and swap the mic as we logged stations.  We called CQ on 7.135 and first in the log was Adrian VK5FANA, followed by Linda VK7QP, and then Ray VK4NH.  It took us about 10 minutes for each of us to get 10 contacts in the log, thus qualifying the park for VKFF.  Contact number ten was with Grant VK2LX with his big 5/9 signal.

I logged 14 stations on 40m, whilst Marija logged 11 stations.  This included Park to Park contacts with David VK5DG/3 (and Vk3TUN) in the Errinundra National Park VKFF-0158. 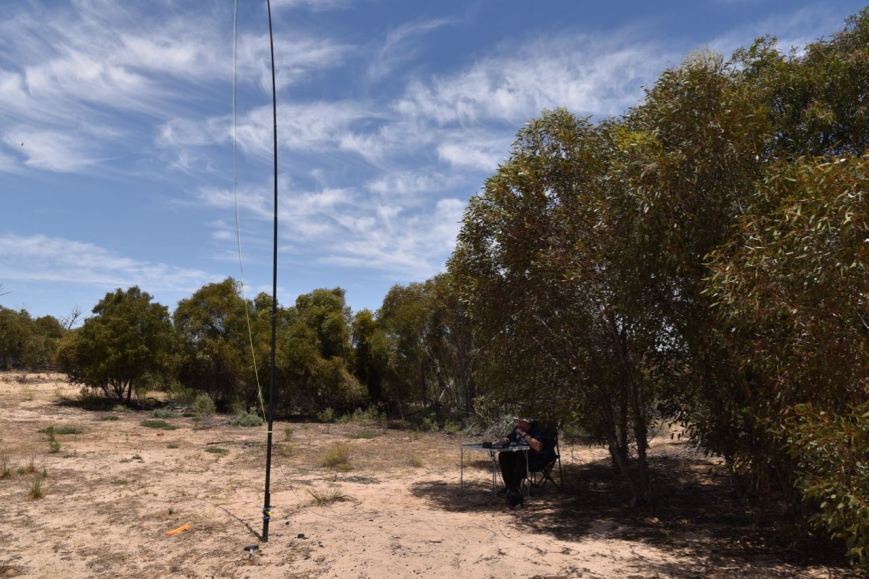 So, with another park qualified for VKFF, and our tummies rumbling, we headed off for some lunch in Hopetoun.