Today (12th May, 2013) was obviously Mother’s Day, and my wife Marija was enjoying a leisurely afternoon on the couch watching re-runs of the Bold & the Beautiful, so I decided to escape to the outdoors while the going was good.  Despite the weather being a little bit dodgy I headed over to Mount Lofty summit, VK5/ SE-005 and the Cleland Conservation Park.  This is only about 20 kms west of me here in the ‘Adelaide Hills’ Mount Lofty Ranges’.  I had activated Mt Lofty as part of SOTA before (so no more SOTA activation points for me), but I hadn’t activated Cleland CP before as part of the VK5 Nat & Cons Parks Award.

Cleland Conservation Park, which is situated about 22 kms south east of Adelaide, was established in 1945.  It consists of about 1,000 ha, and conserves a vital area of bushland in the Adelaide Hills.  The park features the internationally popular Cleland Wildlife Park, Mt Lofty Summit and the scenic Waterfall Gully.  It was named after Professor John Burton CLELAND, a naturalist.

The 3 commercial television transmitter towers are located closely.  This area was devastated by the Ash Wednesday bushfires back in 1983.

I didn’t do the hard hike this time from Waterfall Gully, but rather walked up into the activation zone, setting up in the scrub on a ridge line overlooking the east.  Again used my normal equipment consisting of my Yaesu FT-817nd, and the 40m/20m linked dipole on the 7m squid pole. 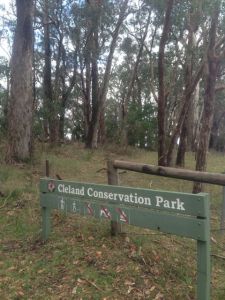 Things were going great until the heavens really opened up and I had to quickly retreat under a nearby large gum tree.  By the time I had got back to the car I was absolutely drenched.  The hot shower, coffee and glass of port was great when I got home.

A real shame about the rain, because I know there were more people there calling & waiting.  Sorry about that.  And to add to the disappointment, conditions on 40m apeared to be quite good.