After activating the Swan Reach Conservation Park (Saturday 11th May 2013), I drove to the Ridley Conservation Park, which is a short distance from the Swan Rch CP.  The park is access off Murraylands Road which runs parallel to the Murray River.  There are spectacular views of the Murray and the white cliffs on the eastern side of the road as you travel towards the park.

This park, which is a narrow but long strip of thick mallee, was created partly for the protection of the wombat.  And although I didn’t see any, there is certainly plenty of evidence of a lot of them being around…there were a heap of burrows.  The southern end of the park is a little more sparse with vegetation.

There are no amenities at this park. 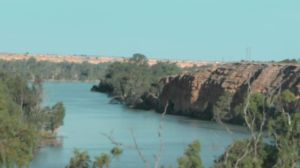 Again I used the Yaesu FT-817nd, 5 watts and the 40m dipole n the 7m squid pole.  I found a little bit of shade and set up the deck chair and propped the radio up on a piece of dead mallee. The weather was unseasonably warm…about 32 deg C.  Although no wombats were seen, again I saw quite a few kangaroos and lots of Mallee ringneck parrots. 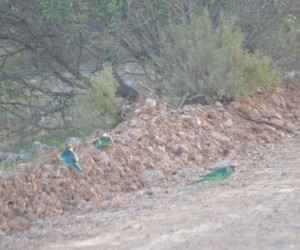 Band conditions were even better than at Swan Rch CP.  I worked 21 stations on 40m, including Mark VK5QI/p and Joel VK5FJMS/p who were both camping down at the Deep Creek Conservation Park.  And also Wayne VK3WAM/p who was on the top of SOTA VK3 VE-204 (The Paps).

Ridley CP is  a great park for camping & playing on the radio.  If you don’t like mallee, wombats, and birds, then it probably won’t be for you.  But it was very quiet and does not appear to be used very often.  A really fun afternoon with terrific conditions on 40m.  Would have loved to have stayed longer, but had to go QRT when it got dark at 6.00 p.m.  And I had a 90 minute drive back home.