My first of 4 activations for Sunday 20th October, was the Minlacowie Conservation Park, which is located on the Yorke Peninsula, about 13 km west of Stansbury, and about 218 km from Adelaide.  So bright and early Marija and I got up, and enjoyed a coffee and breakfast on the porch of the cabin at the Corny Point Caravan Park.  It was a beautiful morning.  Already very warm, with an expected top temperature of 35 deg C.  Following breakfast we headed off after 2 enjoyable nights in Corny Point.  Marija and I highly recommend the caravan park here.  It was clean and tidy, and the owners were very friendly.

Before heading off to the park, we detoured to the local general store and purchased some fly nets to cover our faces.  The bush flies on Saturday had been intolerable.  We then headed out onto the Yorke Highway and into the little town of Warooka, and then on to Hardwicke Bay.  We continued north on the Yorke Highway and passed through the little settlement of Brentwood. Not far out of Brentwood, we then turned right onto Rogers Road (a dirt road), and followed this through to the old Minlacowie South school, which is now a ruin.  After a brief stop to have a look at the old school, we continued west on Rogers Road until we saw the Park on her right hand side. 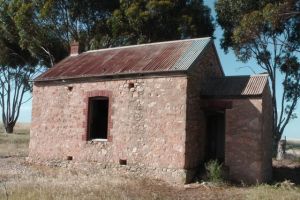 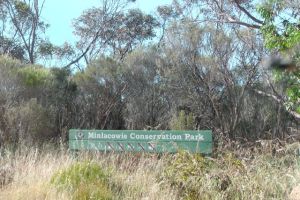 Minlacowie Conservation Park, which was proclaimed in 2008, consists of 28.5 hectares of native bush which is now rather rare on Yorke Peninsula.  The park is an area of high biodiversity, with at least 87 native plant species observed.  The park comprises a small patch of remnant mallee / broombush vegetation in very good condition, and conserves a number of significant plant species including the nationally and state vulnerable Winter Spider-orchid.  The park is dominated by Ridge-fruited Mallee together with Narrow-leaf Red Mallee and Beaked Red Mallee and Dryland Tea-Tree and Broom-bush.  There is a good ground cover including Mallee Bitter-pea, Rosemary Damperia  and Common Stylewort.

We could not find any access to the park on the northern side, so we turned right onto Savage Hut Road (a dirt road) which followed the western boundary of the park.  Again there was no visible access point to the park.  So Marija and I stopped on the side of the road, and set up just of the roadway, not far from the intersection.

Sunday was shaping up to be a very hot day and it was already stifling with a very stiff breeze.  The mallee scrub of the park is very thick and I didn’t fancy walking to far in through fear of snakes and goannas.  And it would have been physically impossible to set up the dipole.

So I attached the 7 m squid pole to the dead branches of a tree, utilising some octopus straps.  I set up my little fold up table and deck chair, and I checked the antenna with the antenna analyser.  And to my surprise, the VSWR was through the roof.  The linked dipole can be a little.  But despite, the VSWR was still really high. 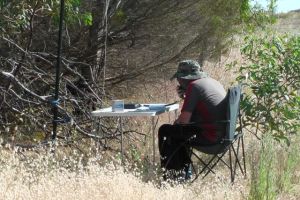 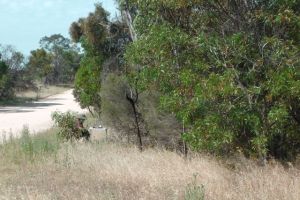 I put a few calls out on 40m but got no answer so I hunted around the band and found Larry VK5LY who was portable in the Spring Gully Conservation Park, near Clare.  Larry was a good strong 5/9 signal and was using his new Wouxon X1M transceiver. I breathed a sigh of relief.  I ahd one contact.  I had qualified the park.   Larry told me that John VK5BJE was up 5 kc, so I headed up to 7.110 and found John calling CQ from the Hallet Cove Conservation Park with a good strong 5/8 signal.

At the conclusion of the QSO with John, Graham VK5KGP asked me to QSY up 5.  So I obliged and had a chat with Graham, before I decided that the heat, the flies, and the antenna issues, were not worth sitting in the sun for.  So I packed up hoping that Barker Rocks Conservation Park, which was on the coast, would be a little bit more pleasant, and that I might be able to solve the antenna issues.

During the activation I had a local farmer drive by and ask me what I was researching.  So I explained to him that I was a silly amateur radio operator sitting in the heat with the flies talking to other hams.  He was quite interested, but warned me not to venture too far into the scrub because of all the snakes.

After just 15 minutes in the park, I had 3 QSO’s in the log.  This is the lowest number of contacts I have ever had from a park.