Following our activation of Waitpinga Conservation Park, Marija and I continued south on the Tunkalilla Road and then turned left into Rymill Road, until we reached our next destination….the Eric Bonython Conservation Park.

Again, as is the case with Waitpinga CP, this is a small park and consists of just 6 hectares.  Although small it is an excellent example of what the vegetation was like on the Fleurieu Peninsula prior to the arrival of the Europeans and the destruction of the bush.  I was not able to find a lot of information on this park on the internet.  I presume it was named after Eric Bonython, the author ? 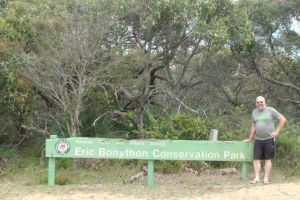 The scrub in the park was very thick.  There were no visible cleared areas of land at all.  A large number of the native plants were out in flower. 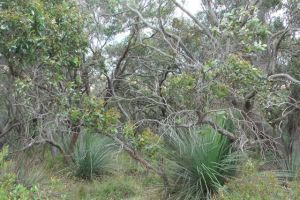 We set up the gear just off the side of the road as it was physically impossible to get into the scrub, and just too risky with the ‘Joe Blakes’ (snakes).  We stretched out the legs of the dipole and ran them along in the direction of the dirt road, and secured the squid pole with the squid pole holder and an octopus strap. 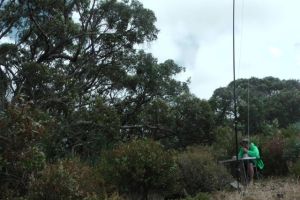 My first contact was with Col VK5HCF who was up at the South East Radio Club clubrooms, Mount Gambier, using his normal QRP 5 watts.  Col had a great 5/9 signal.  This was followed by Tim VK5AV, also from the south east of South Australia, Graham VK5KGP from Victor Harbor, and Nigel VK5NIG in the north eastern suburbs of Adelaide.

I had a steady flow of callers after this, but sadly the weather had really deteriorated. The cloud cover had moved in, the sun had disappeared, and the wind was extremely strong.  In fact it was so strong that the 7m telescopic squid pole, de telescoped twice during the activation.

I managed another contact with Marshall VK3MRG in the Lake Eildon National Park, and one SOTA contact with Brian VK3MCD who was portable on SOTA peak VK3/ VU-011.

The weather was just that lousy that it was not enjoyable sitting out there, so it was time to pack up.  I had qualified the park and had a total of 17 QSO’s from VK3 & VK5 in the log.