My fourth park activation for Friday 6th June 2014, was the Tilley Swamp Conservation Park, which is located north of Kingston in the Upper South East of South Australia.  The park conserves an area of about 1,525 hectares and was proclaimed and gazetted in 1993.

The park forms an integral part of the significant Tilley Swamp watercourse which moves surface waters northerly through the park.  During summer, the park is an important refuge for thousands of water birds, and for at least 20 other species throughout the year.  This includes the vulnerable Rufous Bristlebird.

The park is also home to a number of native mammals including the rare (SA) Common Wombat and rare (SA) Red-necked Wallaby.

The park is considered to be one of the most significant scrub blocks in the area and contains a number of rare plants including the Metallic Sun-orchid.

Tilley Swamp was named after Thomas Tilley, who succeeded John MacIntyre as manager for the Leake Brothers at Glencoe in the South East.  Tilley later joined pioneer pastoralist George Ormerod in a pastoral partnership, which included a lease of the Avenue Range run and other properties. 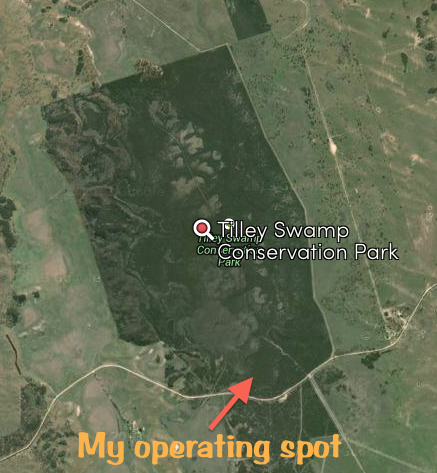 I accessed the park via Petherick Road, which runs off the eastern side of the Princes Highway.  Petherick Road runs along the southern boundary of the park.  I found an unlocked access gate and drove my car in a very short distance.  There are no formal tracks. 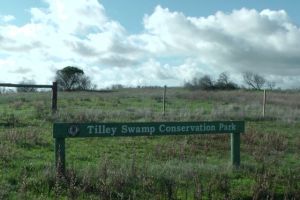 My first impressions of this park were that it was probably one of the least attractive that I had ever visited.  The park was severely impacted by a bushfire in February 2013 and there was still lots of evidence that the park was recovering.  However, I only saw a very small portion of the park, and never got the opportunity of exploring it in detail, so I will reserve my judgement until another visit.

I set up underneath a small cluster of ‘dead’ trees and shrubs, which provided a bit of shade from the sun.  There was plenty of room here to run out the legs of the dipole which I held down with some dead tree branches. 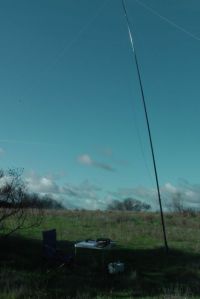 My first contact was with Hauke VK1HW who was mobile in the Selwyn Snowfields in the Snowy Mountains in New South Wales.  This was followed by Greg VK5GJ at Meadows in the Adelaide Hills, Arno VK5ZAR in Adelaide, and then Col VK5HCF at Mount Gambier in the South East.  All had beautiful 5/9 signals. 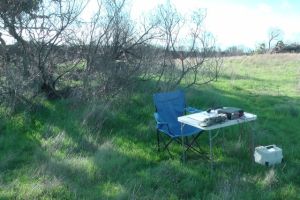 A steady flow of callers followed from VK2, VK3, and VK5.  Nigel VK5NIG was kind enough to give me a call whilst he was operating from the top of Mount Gawler VK5/ SE-013.  Although Nigel was running QRP 5 watts, his signal was a very good 5/9.  It is very refreshing to see a number of SOTA operators now chasing park activators, and vice versa of course. 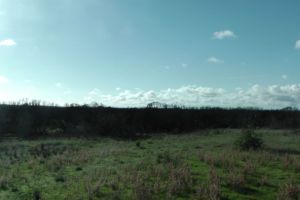 Another good contact from this park was with Ken VK3FKNZ at Belmont, a southern suburb of Geelong.  Ken advised me that he had only been on air for one week.  Welcome aboard Ken.  Ken had a very nice 5/9 signal coming into Tilley Swamp with his IC-751A and wire antenna.

My last contact in the park was with Greg VK5GJ who called in for the second time, but this time using his ‘just completed’ home brew QRP rig.  Greg had a solid 5/9 signal with very nice audio.  Congratulations Greg on your home brew construction. 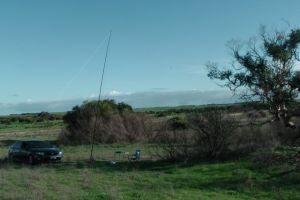 After operating for one hour at Tilley Swamp I had a total of 26 QSOs in the log.  It was time to move on to my final activation of the day, the Mount Scott Conservation Park.

The following stations were worked: