Above:- Map showing the location of the Cygnet Estuary Conservation Park on Kangaroo Island.  Map courtesy of Protected Planet.

I had a bit of a sleep in on Tuesday morning, rising from my slumber at around 8.00 a.m. SA local time.  The coffee pot was the first point of call for the morning, followed by breakfast on the porch of the cabin.  As I had arrived at Waves & Wildlife on Monday night whilst it was dark, this was the first opportunity I had to see my surrounds during daylight.  The cabins are set on the top of a hill on acreage overlooking Stokes Bay. 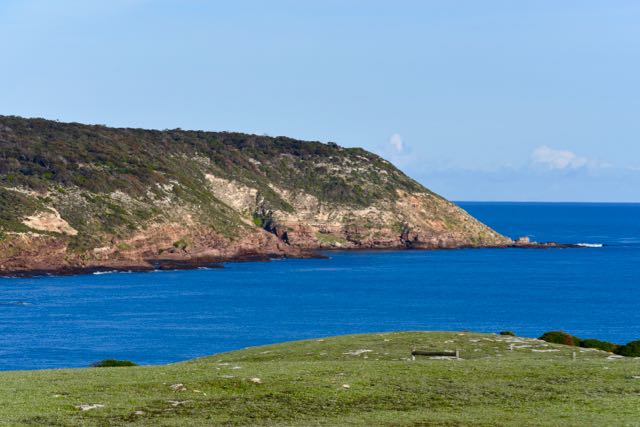 There were a large number of Western grey kangaroos grazing in front of the cabins and also enjoying the beautiful morning sunlight.  I suspect waiting for a possible breakfast from some of the tourists.  Alongside of my cabin a number of Crimson Rosellas were also busy feeding on the seeds from some of the native plants.

After breakfast I headed down to Stokes Bay itself where I sat for a while enjoying the morning and taking a few photographs of the plethora of seabirds.  It is believed that Stokes Bay was named after the first mate of the Hartley which arrived in South Australia in October 1837.

I then commenced heading south on the Stokes Bay Road towards Parndana.  There were some nice views of Stokes Bay in the rear vision mirror as I reached the high point of the road.  A short photo stopped ensued. 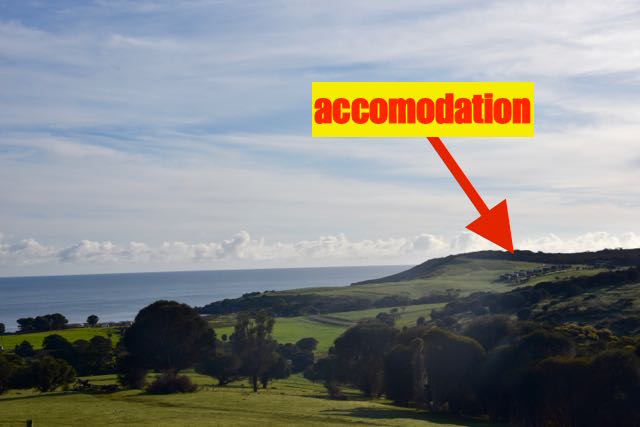 Mobile telephone reception on Kangaroo Island, depending on your carrier, can be very patchy.  And that’s certainly what I experienced with Optus.  There was no mobile phone reception at Stokes Bay, so once I got to Parndana, I stopped to view the best route into the Cygnet Estuary Conservation Park.  It appeared that I might be able to get into the park via Estuary Road, off the Playford Highway, but I was wrong.  I drove down a dirt track off Estuary Road but reached a sign saying no entry.  So it was back to Playford Highway and a review of the map on the phone.

There appeared to be a track running off Hog Bay Road, so I travelled back in that direction, but sadly that was a no go as well.  So it was back into Bronwlow for me and with the assistance of some of the friendly locals, I drove along the beach at Brownlow. 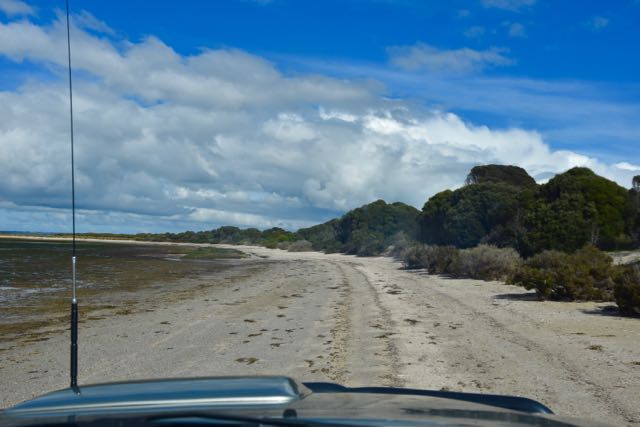 I reached a point where I couldn’t go any further so it was out on foot for the rest of the way.

As I was near the mouth of the Cygnet, the area was alive with birdlife, including Pied Oystercatchers, pelicans, cormorants, and Black swans. 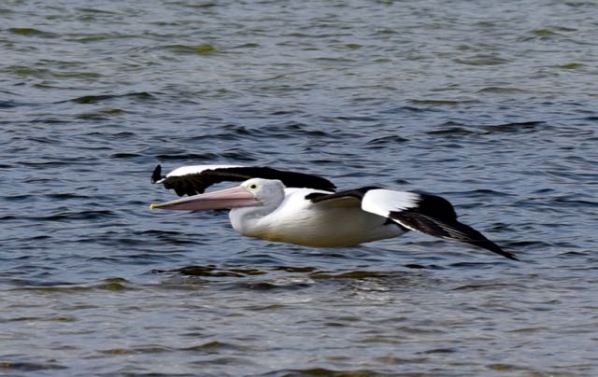 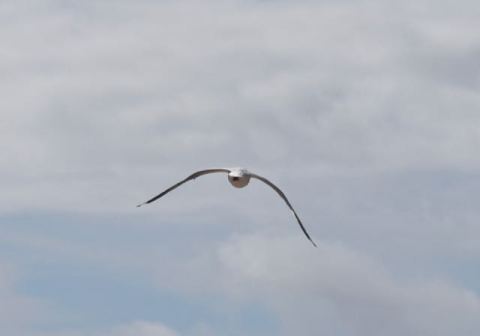 Cygnet Estuary Conservation Park is located on the west coast of Nepean Bay on Kangaroo Island, about 5 kilometres west southwest of Kingscote.  It was proclaimed under the National Parks and Wildlife Act 1972 in 2014 on the basis that some existing crown land ‘should be protected and preserved for the purpose of conserving any wildlife and the natural features of the land’.  The Cygnet Estuary which is considered to be a significant wetland is located within the boundaries of the conservation park. 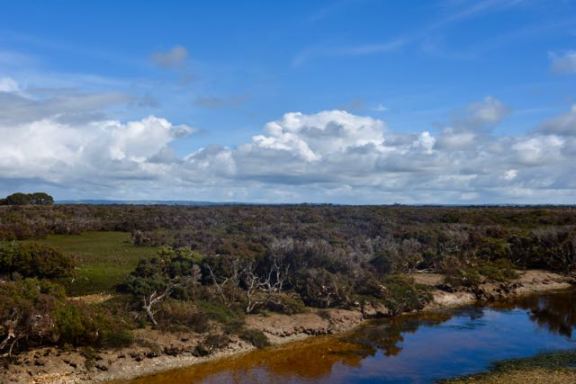 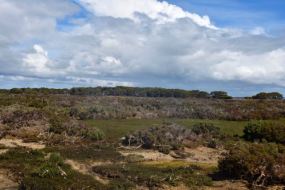 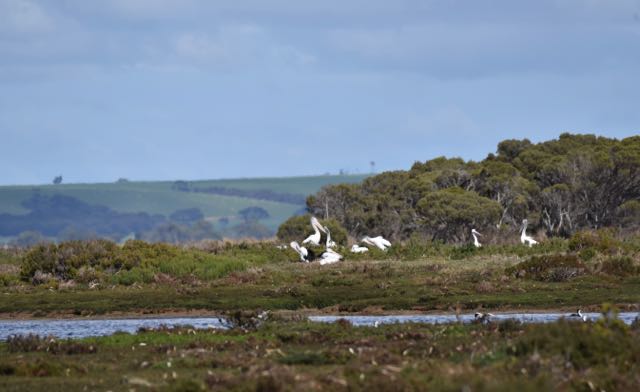 The Cygnet River took its name from the Cygnet, which was the second ship to arrive in the colony of South Australia.  She sailed from England under the command of Captain John Rolls, and arrived in Nepean Bay on Kangaroo Island on 11th September 1836.  The Cygnet which had been built of teak in India in 1827 had been chartered by the Colonisation Commissioners to sail for South Australia in 1836, carrying many or the survey staff, along with a number of emigrants.

Above:- Sketch of the Cygnet at anchorage at Port Augusta, 1833.  Image courtesy of State Libarary of Western Australia.

However the river has not always been known as the Cygnet.  It was originally known as the Three Wells River, and also the Morgan River after Captain R.G. Morgan of the Duke of York, the first vessel to bring immigrants.  The first reference of the Cygnet (or Three Wells River) can be found in a letter which Colon William Light wrote to the Colonial Storekeeper on 6th September 1836, in which Light recommended him to land stores on Kangaroo Island from the Cygnet at the mouth of the freshwater river.

After some negotiation of the estuary, and a few trips back to the 4WD, I found an operating spot.  This definitely wellington boots territory!  I ran the Yaesu FT-857d, 40 watts and the 20/40/80m linked dipole for this activation.

I was set up and ready to go a little later than planned, just after 10.00 a.m. South Australian local time.  I was very pleased to have Rob VK4AAC/3 as number one in the log at Cygnet Estuary.  Rob was portable in the Great Otway National Park VKFF-0405 and had a beautiful 5/9 signal.  Not a bad way to start the activation….a Park to Park (P2P).  The frustration of getting lost and the backwards and forwards travel to get into the park, was tethered a little by the P2P contact with Rob.  This was followed by the ever reliable Mick VK3GGG/VK3PMG, Peter VK3TKK, and then Peter VK3PF.

The 40m band was behaving itself, with some great signals from VK2, VK3, VK4, VK5, VK6 and VK7.  A number of mobile stations were logged including Greg VK5ZGY mobile in the South East, Peter VK5FLEX/2 and VK5HS/2 at Byrock in New South Wales, and John VK2YW mobile near Hay.  Jarrad VK6FFAR/p who was alongside the ocean running his 10 watts was a very nice 5/5 signal to Cygnet River.

I was pleasantly surprised at how well the Western Australian stations were coming in on 40m considering the time of the day.  Mike VK6MB was a good 5/7 (5/5 received), whilst Don VK6EY at Busselton in the South West was a strong 5/8 (5/8 received).

Neil VK4HNS portable in the Koreelah National Park VKFF-0268 called in and was a 5/3 signal at Cygnet Estuary (5/3 received).  Another P2P contact for the log.

After working a total of 48 stations on 40m I headed over to 14.310 on 80m where I worked Rick VK4RF/VK4HA, John VK5EMI, Mike VK6MB and Brooke VK4RZ.  I was very surprised to work John VK5EMI on 20m.  John lives in the Adelaide Hills and although not strong, was very readable in Cygnet Estuary (5/2 sent and 4/3 received).  I would have loved to try 80m, but it was a bit tricky with the length of the antenna, and my feet were already sopping wet, and I was way behind schedule.  So it was time to pack up, with a total of 53 contacts in the log.

Again, thanks to all those that took the time to spot me, including Gerard VK2IO.