It was now day two of our trip (Saturday 17th November 2018).  We had planned to activate just one park today, the Greater Bendigo National Park, and spend most of the day looking around Bendigo.

After breakfast we drove into the Bendigo CBD and viewed the majestic Sacred Heart Cathedral.  It is one of Australia’s largest churches and second tallest after St Patricks Cathedral in Melbourne.  The cathedral is in the early English Gothic design, and was completed in 1901.  The architect was William Tappin.  The cathedral’s construction was made possible chiefly through the estate of Henry Backhaus (1811-1882), a German from Paderborn and the first Catholic priest on the Bendigo goldfields.

Marija and I then took a stroll through the Bendigo Botanical Gardens, which are one of regional Victoria’s earliest botanic gardens.  They were established in 1857 and are included on the Victorian Heritage Register due to their historical, architectural, scientific, botanical, aesthetic and social significance.

It was now 9.00 a.m. and the Bendigo Visitor Centre was open, so we headed there with a view to purchasing some tickets for the Central Deborah Gold Mine.  After buying a ticket package for the gold mine, the tram and the Bendigo Joss house, we took a quick walk around Bendigo, admiring some of the historic buildings.

It was then off to the Central Deborah Gold Mine.  The mine operated from 1939-1954 and during that time employed 357 miners, who successfully extracted almost one ton of gold (929 kg), which would be worth about $50 million in today’s prices.

A number of different types of tours are on offer at the mine.  We took the Mine Experience Tour, and after donning a hard hat and miners lamp, we descended 61 metres beneath the surface.  The mine actually descends to a depth of 410.8 metres, but this particular tour takes you to the 61 metre level.  The tour was hosted by a very knowledgable young lady who guided us through a number of tunnels, stopping off a number of times along the way to look at points of interest.  The tour went for about 75 minutes.

Following the tour, we explored the surface of the mine, panning for a bit of gold (we didn’t find any), and looking at the interpretive museum.  This was a very interesting visit.

Before leaving the mine we purchased a miners pasty.  This had been spoken about during the tour,  The miners pasty originated in Cornwall and were a delicacy for the miners working underground.  This special pasty consists of meat and vegetables at one end of the pasty, and apple pie at the other.  The thick crust of the pasty was used as a grip for the miners dirty hands.  The crust was thrown out once the miners had finished the pasty.

Marija and I then  jumped on to one of the vintage Bendigo Talking Trams, operated by Bendigo Tramways.  The trams travel through Bendigo and stop at various locations.  It is a hop on, hop off arrangement.  The tram stops at the Central Deborah Gold Mine, Charing Cross (CBD/Fountain), Tramways Depot & Workshop, Lake Weeroona, Tysons Reef, and the Bendigo Joss House Temple.

Trams were first introduced to Bendigo in 1890.  In April 1972, the Bendigo Tramways were closed as a commuter service.  An estimated 20,000 people lined the streets to say goodbye to the last of the trams.

We stopped briefly at the tram workshop so that I could enjoy my miners pasty, which I can highly recommend.  Lunch and a dessert all in one.

The Alexandra fountain at Charing Cross

On board the tram 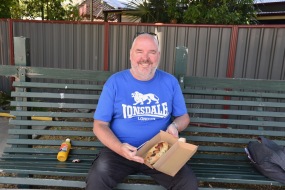 We caught the tram to the Bendigo Joss House Temple, a Chinese place of worship, which was opened in 1871.  Originally part of the Ironbark Chinese Camp, it is one of the few remaining buildings of its type in Australia. 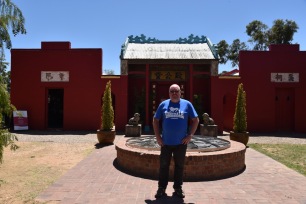 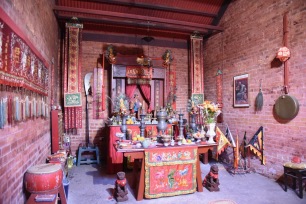 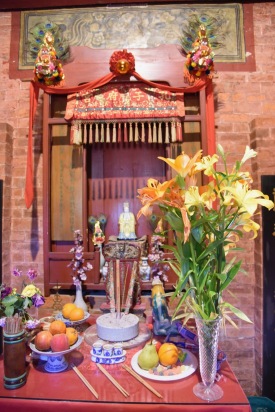 We caught the tram back into the main section of Bendigo, passing Lake Weeroona.  In 1876, a total of 45 acres of land was set aside by the Sandhurst Council for the building of a lake for boating and recreational activities.  The lake cost 10,000 pounds to construct and in 1878 was opened to the public.

We also travelled passed the Shamrock Hotel, which was restored by the Victorian State Government as one of Victoria’s most important buildings.  The present day building was built in 1897 after the original 1850’s building was destroyed by fire. 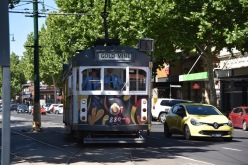 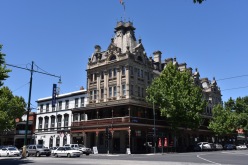 Our next stop was the Golden Dragon Museum, the Chinese Cultural Centre of Australia.  The museum opened in 1991 to document, interpret and preserve Chinese heritage in Australia.

It was now late afternoon, and Marija and I headed to the Greater Bendigo National Park VKFF-0623.  This was to be the first time that Marija and I had activated this park, so it was a unique park for us for both the World Wide Flora Fauna (WWFF) program, and the Keith Roget Memorial National Parks Award (KRMNPA). 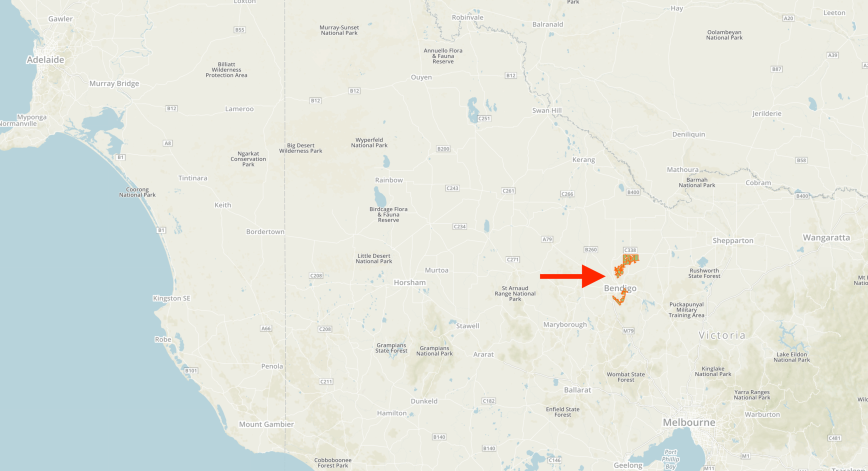 Above:- Map showing the location of the Greater Bendigo National Park.  Map courtesy of Protected Planet. The Kamarooka and Whipstick sections protect a unique tract of mallee vegetation known as the ‘Whipstick scrub’.  These sections contain some of the best stands of distinctive Box-Ironbark forests of north central Victoria.

Over 170 species of birds have been recorded in the park, including the Grey Shirke-thrush, Crested Bellbird, and Gilberts Whistler.  The park is home to a diverse range of native animals including Eastern Grey Kangaroo, Black Wallaby, Echidna and Common Dunnart, and the rare Brush-tailed Phascogale.  The Greater Bendigo National Park has the only Victorian population of Pink Tailed Worm Lizard.

Marija and I headed for the Notley campground in the northern section of the park.  However when we got there, the campground was full of caravaners and campers, and we decided not to disturb them, and head for another location. 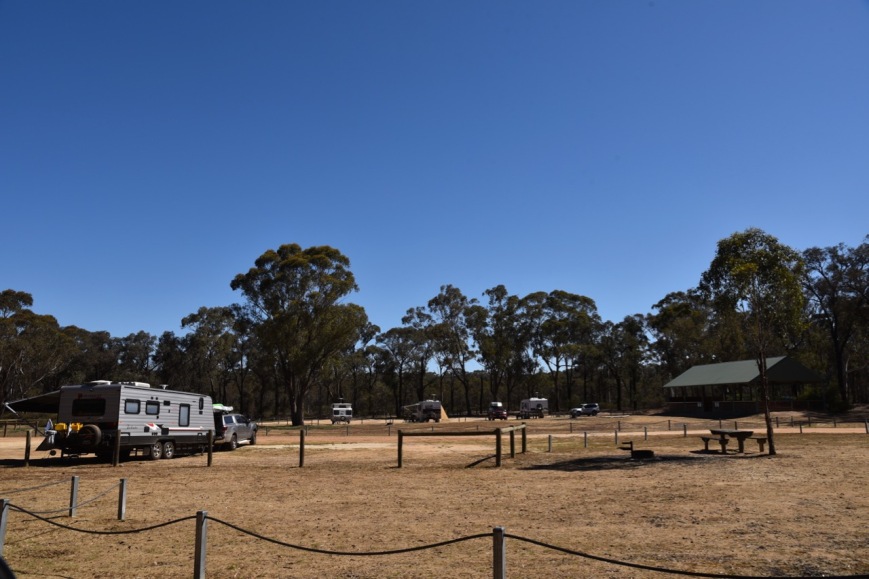 We drove a little further down Nuggety Road and found a clearing in the scrub and set up.  For this action we ran the Yaesu FT-897 and the 20/40/80m linked dipole.  Power output was 10 watts PEP for Marija, and 40 watts for me.

Above:- Map of the northern section of the Greater Bendigo National Park, showing our operating spot.  Map courtesy of Parks Victoria.

Unfortunately we had very spotty internet coverage in the park, so we were unable to throw up a spot on parksnpeaks.  I called CQ on 7.144 on the 40m band and it didn’t take long for the first caller.  It was Greg VK5GJ in the Adelaide Hills, followed by Gerard VK2IO who kindly placed a spot up for us.  Sadly just 6 QSOs into the activation, a New Zealand station came up on 7.146 working into the USA.  He was very strong and causing lots of interference, so I moved down the band to 7.130 and called CQ again.  Andrew VK2PEZ answered my call, followed by Andrei ZL1TM and then Ron VK3JP.  I turns out that Ron is a local and we arranged for him to pop out to the park to say hello.  In fact Ron was my 10th contact, qualifying the park for me for the VKFF program. 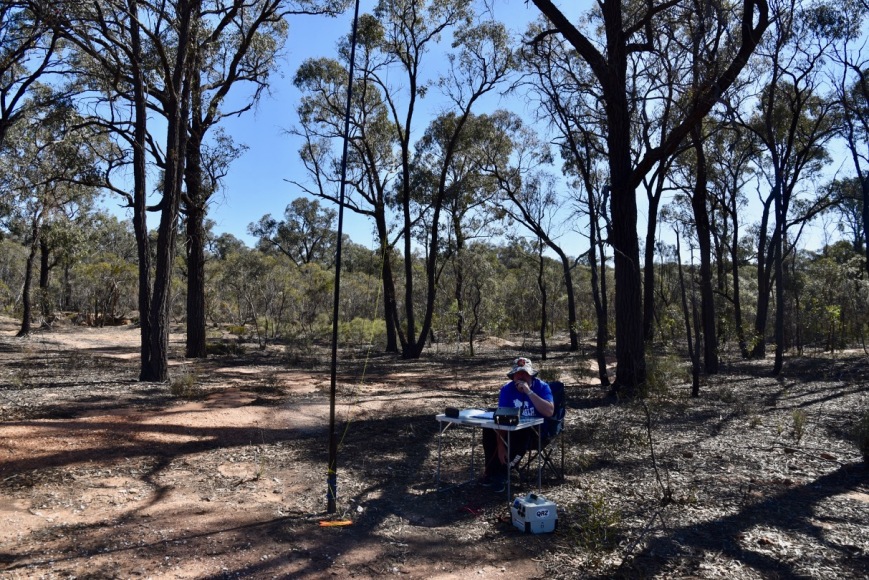 I continued to work a steady flow of callers, and by the time Ron arrived at the park I had 28 contacts in the log.  I had just moved to 3.610 on the 80m band when Ron found us.  Ron is a fairly regular park hunter, so it was great to catch up with him in person. 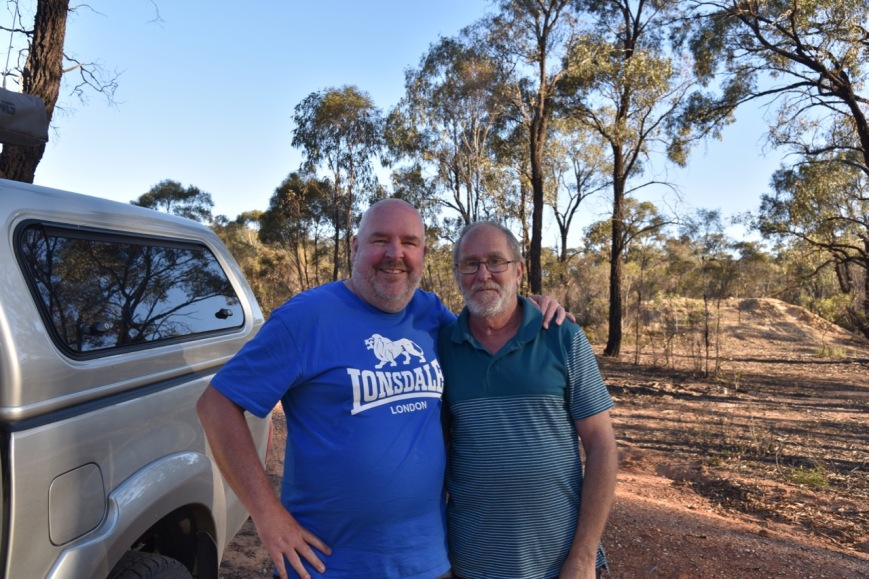 Whilst I chatted with Ron, Marija called CQ on 3.610.  Peter VK3TKK was first in the log, followed by Marc VK3OHM, and then Peter VK3PF.  Marija logged a total of 6 stations on 80m, all Victorian stations.

I then jumped back on the mic, whilst Marija spoke with Ron.  I logged a further 5 stations on 80m, before heading back to 40m, keen to get my 44 contacts to qualify the park for the global WWFF program.  I called CQ on 7.130 and this was answered by Mark VK4SMA, followed by Adam VK2YK , and then John VK5BJE.  I logged a further 5 contacts, under fairly trying conditions with lots of Indonesian interference on the frequency.

But I had now qualified the park for VKFF, the KRMNPA, and the WWFF program, with 45 contacts in the log.

Marija and I bid farewell to Ron, and packed up.  We headed back into Bendigo, freshed up at the motel, and headed out for tea again at the Seasons Family Bistro opposite our motel.  It was another very nice meal.

Bendigo Tramways, ‘All Aboard’ pamphlet.