After leaving Arcadia, Marija and I continued south on the Euroa-Shepparton Road, heading for the town of Euroa.  We stopped briefly to have a look at the Major Thomas Mitchell Expedition monument.  It marks the site where Major Mitchell and his expedition party passed on their ‘Australia Felix’ expedition in 1836.  Australia Felix is Latin for ‘fortunate Australia’ or ‘happy Australia’, and is the name given by Mitchell to the lush pasture area of western Victoria he explored in 1836. 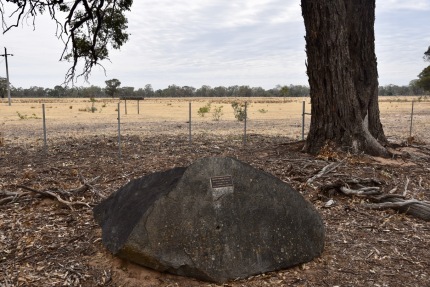 We then drove in to the historic town of Euroa.  Urowa, or Euroa, is thought to be derived from an Aboriginal word meaning push or joyful. 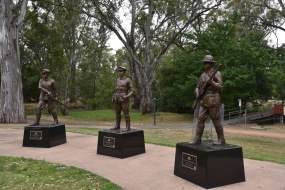 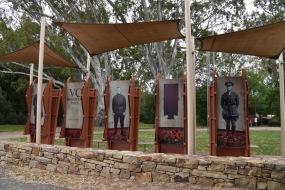 Nearby is a memorial for the site of James Kirkland’s Euroa Station Homestead  on the Urowa Pastoral Run(1844-1851).  Kirkland was the resident squatter at the time that the original town survey was made in 1850.

We had hoped to visit the museum in Euroa, however it was closed.  The museum is contained within the old Farmers Arms Hotel.  In 1876 John Shelswell was granted the first licence for the hotel.  It served as a hotel with various licences for about 40 years, after which is became a boarding house run by the widow of a local policeman.  Edith Smith ran it as such for about 50 years before the then Shire of Euroa purchased the building for the Historical Society. 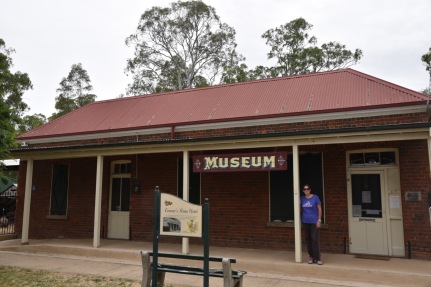 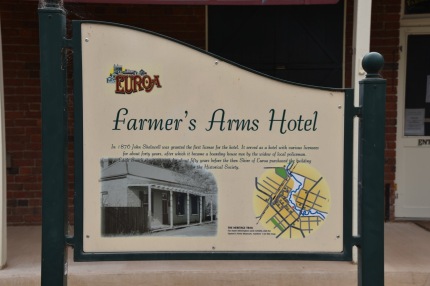 We then had a look at the Hume and Hovel monument which stands opposite Burton’s Bridge.  Who were Hume and Hovel?  In 1824, Hamilton Hume and William Hovell led an expedition of discovery to find new grazing land for the colony.

We also stopped to have a look at the locally named Swaggy Tree, which is a large River Red Gum hundreds of years old.  It is believed people sheltered here during the 1930s Depression. Major Thomas Mitchell passed nearby in 1836 during the Australia Felix expedition and, not long after, the township of Euroa was established on the banks of the Seven Creeks.

We then undertook a section of the Euroa Heritage Trail.  A Trail Guide can be downloaded from http://euroa.org.au/heritage/.  Euroa contains many historic buildings dating back to the late 1800’s.

One of the more infamous sites in Euroa, is the former site of the second Euroa National Bank.  This is the bank which was robbed by the notorious Ned Kell Gang in 1878.  The bank no longer stands, but there is an information board here. The present day building was built in 1974 with bricks from the original bank building.

After a bite to eat, we left Euroa and headed to our second activation for the day, Mount Wombat VK3/ VU-002, which is located in the Mount Wombat-Garden Range Flora & Fauna Reserve VKFF-2403.  We drove out of Euroa, south east on the Euroa-Strathbogie Road, and then turned right onto Mount Wombat Road. 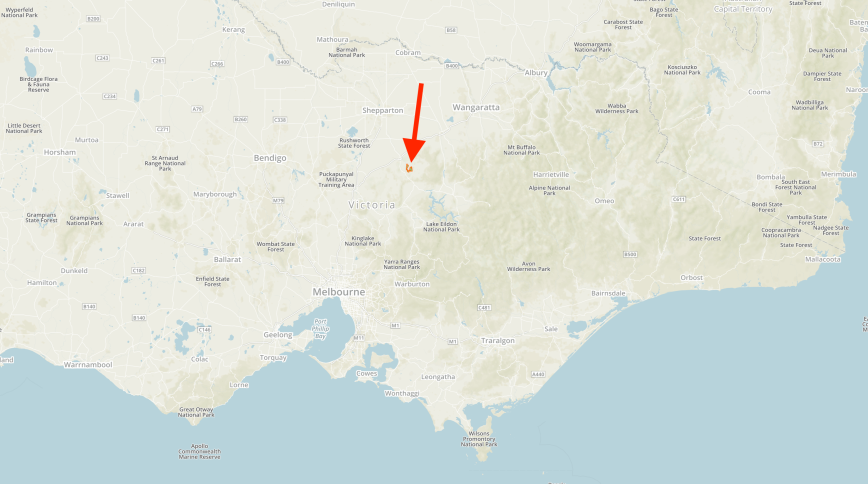 Above:- Map showing the location of the Mount Wombat-Garden Range Flora and Fauna Reserve.  Map courtesy of Protected Planet

We soon reached the park, which was signposted as Mount Wombat Native Plants Reserve.  Presumably this was its previous name and no-one has bothered to change the sign. 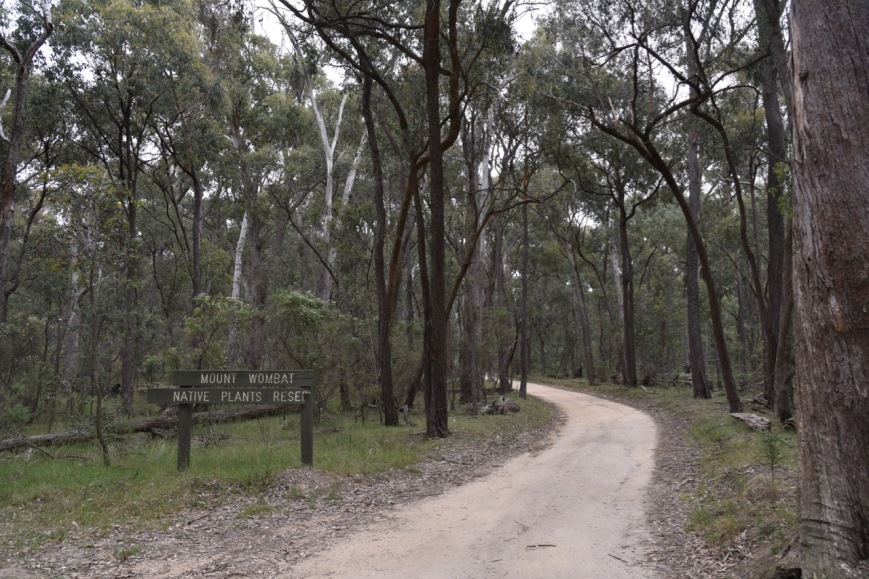 The Mount Wombat-Garden Range Flora & Fauna Reserve is 14.23 km2 in size and consists of Messmate Euc. obliqua forest.  Parks Victoria only have a map of this park on their website, and I was unable to find a lot of descriptive material on the internet about this park.

There were numerous small wildflowers in bloom during our visit to the summit/park.

We followed the Mount Wombat Road up to the summit.  The road is dirt, but is in good condition, and is easily passable in a conventional vehicle.

Mount Wombat is 802 metres above sea level and is worth 4 points for the Summits on the Air (SOTA) program.  Prior to our activation, the summit had been activated a total of 19 times, first by Wayne VK3WAM in May 2012. At the top of the summit you will find a fie spotting tower (which was manned during our visit), various communications towers, and a trig point.  The original timber fire spotting cabin was destroyed by fire in 1980, as a result of a lightning strike.  The current tower was built during the 2010-11 fire season.  The VK3RGV repeater is located on the summit. 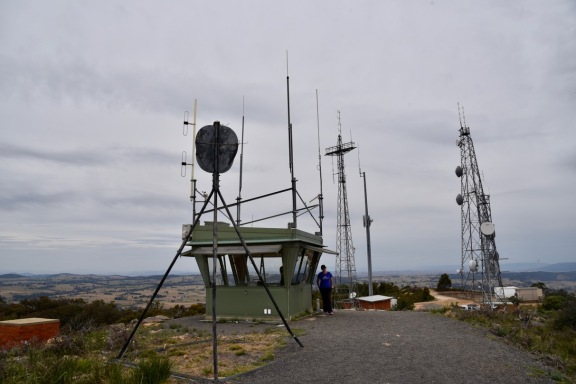 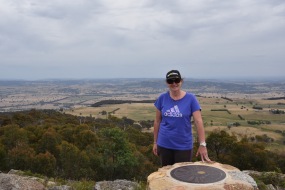 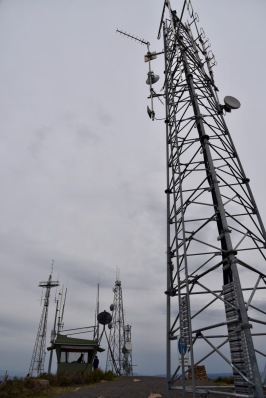 The summit offers sensational 360 degree views of the surrounding countryside.  Despite is being overcast during our visit, we still enjoyed the magnificent views.  The Waranga Basin and Goulburn Weir at Nagambie are both visible from the lookout.

We set up to the south of the trig point and fire spotting tower, alongside one of the enclosures for one of the telecommunications towers.  There was just enough room here to stretch out the 20/40/80m linked dipole, without encroaching on the carpark.

The weather was quite threatening on the summit, with dark and stormy conditions, and as a result strength 9 static crashes on the band.  And it was humid and warm.  So I was just hoping that we would beat the rain, and qualify the summit for SOTA, and hopefully the park for the VKFF program.

Marija placed a spot up for me on parksnpeaks, and I started calling CQ on 7.147.  First in the log was Craig VK3WAR, followed by Peter VK3PF, Barry VK5KBJ/m mobile, and then Alan VK2MG.  I had qualified the summit.  I pushed on and soon had contact number 10 in the log, qualifying the park for VKFF.  QSO number 10 was with Fred VK3DAC.  I logged a further 2 stations, Grant VK2LX and Compton Vk2HRX, before swapping the mic with Marija. 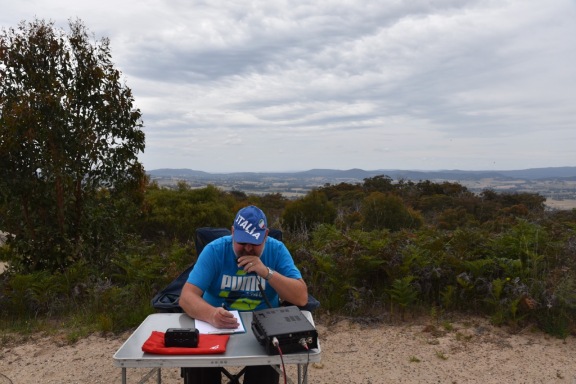 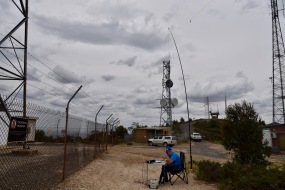 Marija’s first contact was with Compton VK2HRX, followed by Marc VK3OHM, and then Ray VK4NH/VK4DXA.  Marija had qualified the summit as well.  Marija was proving to be quite popular, and soon had contact number 10 in the log, a QSO with Grant VK2LX.  A further 5 stations were logged before Marija, before handing the mic back to me.

I continued to log stations on 7.147 until callers dried up.  With 25 stations in the log, I decided it was time to try the 80m band.  I called CQ on 3.610 and this was answered by Geoff VK3SQ in Beechworth, followed by Peter VK3PF/VK3KAI.  Unfortunately they were my only callers on 80m.  I suspect it was just too noisy with the static crashes for some people to hear me.

I then lowered the squid pole and removed the links, and headed to 14.310 on the 20m band.  Despite Peter placing a spot up for me on 20m (Thanks Peter), I had no callers and just started to experience a few drops of rain.  So it was quickly back to 40m and more CQ calls on 7.147.  I moved through the callers quickly, and within 14 minutes I had the magical number 44 in the log, a QSO with Gary VK2ZKT.

The rain was starting to get a little heavier, and rather than deploy the bothy bag, we packed up hurriedly.  Marija and I had both qualified the SOTA summit, the park for VKFF, and I had qualified the park for WWFF.  I’m sorry to anyone else who might have been there, but we were getting wet.