Our second  park for Saturday 26th November 2016 was the Mowantjie Willauwar Conservation Park VKFF-0919 which is located a short distance from Poonthie Ruwe.  The park is situated about 9 km south of Adelaide and about 105 km east of Adelaide.

Above:- Map showing the location of the Mowantjie Willauwar Conservation Park.  Map courtesy of Protected Planet.

Mowantjie Willauwar Conservation Park was proclaimed on 2nd June 2005 and conserves 142.9 hectares of Southern Cypress Pine Forest.  The park is found approximately six kilometres south-west of Tailem Bend in the Murralyands region of South Australia.  The nationally vulnerable Sandhill Greenhood Orchid and nationally endangered Metallic Sun-orchid have been found in the park. The population of Sandhill Greenhood Orchids is one of the nine remaining in our State.

‘Mowantjie’ is the Ngarrindjeri aboriginal name for the native pine found in Mowantjie Willauwar Conservation Park, while ‘Willauwar’ is a plural word meaning ‘forest of species’.  Therefore the name ‘Mowantjie Willauwar’ means ‘Native Pine Forest’, which provides an accurate description of the park.

Mowantjie Willauwar Conservation Park was previously constituted as the Tailem Bend Forest Reserve under the Forestry Act 1950.  While the reserve was managed by ForestrySA, it was subject to a number of management plans. State Flora at Murray Bridge performed the maintenance and pest control of the property on behalf of ForestrySA for the 10 years prior to its constitution as a park.  This included repairing fences, and controlling pest plants and animals, and surveys of reptile and bird species. The Princes Highway previously cut through the reserve and was re-routed to bypass the reserve during the 1990s.  Work has been undertaken to rehabilitate the former Princes Highway route, and the bare ground that remained after the construction of the current Princes Highway was revegetated by local schools in association with local naturalists. Surveys of orchid species, the Sandhill Greenhood in particular, have been conducted in the park by the Native Orchid Society of South Australia.

I have activated this park a few times previously and had always activated from the northern side of Placid Estates Road.  This time I decided to check out the southern section of the park.  We briefly stopped off to have a look at the plaque to commemorate the opening of the new Princes Highway.  The old highway previously passed through the park. 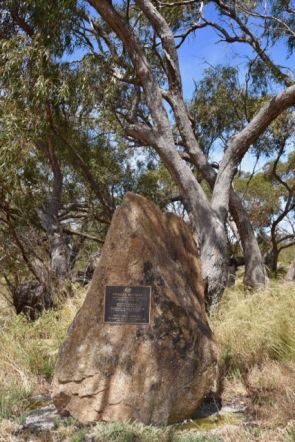 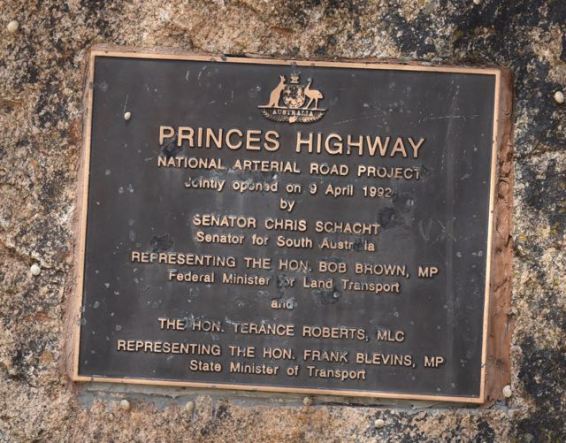 We soon reached Placid Estates Road where there are two gates to enter the park.  One on the northern side and one on the southern side.  We entered the park via the southern gate. 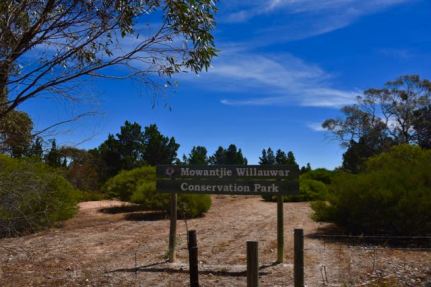 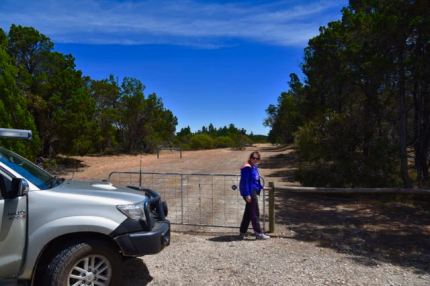 We drove a km or so along the old highway which in parts is dirt and in others, some of the old bitumen. 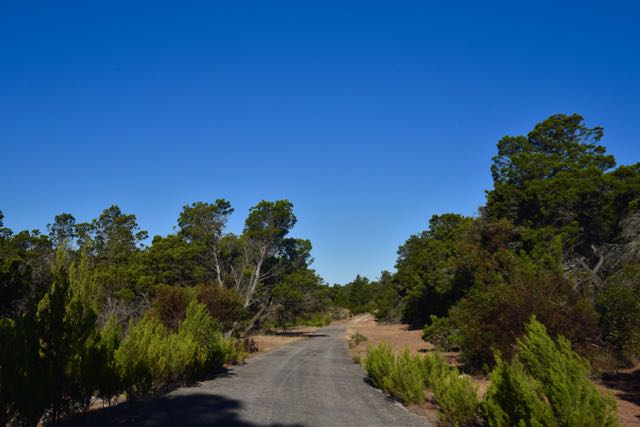 We set up underneath the shade of some pine trees as it was a very warm afternoon.

Marija then started calling CQ and this was answered by Mick VK3PMG/VK3GGG, followed by Tony VK5MRT, and then Mike VK5FMWW/VK5FVSV.  Marija’s 10th contact, qualifying her for the VKFF program, was Les VK5KLV who was portable in the Mount Remarkable National Park VKFF-0360.  Marija went on to work a total of 39 stations on 40m from VK1, VK2, VK3, VK4, and VK5.  This included further Park to Park contacts with Ian VK1DI in the Old Naas Nature Reserve VKFF-0992, Gerard VK2IO/p in the Bargo State Conservation Area VKFF-1271, Tim VK3MTB/p in the Gippsland Lakes Coastal Park VKFF-0747, Peter VK5PET in the Totness Recreation Park VKFF-1754, Gordon VK5GY/p in the Cox Scrub Conservation Park VKFF-0824, Peter VK3ZPF/p in the Crossover Regional Park VKFF-0965, Rob VK4FFAB in the Lockyer National Park VKFF-0719, and Peter VK3TKK in the Arthurs Seat State Park VKFF-0750.  It was certainly Park to Park heaven! 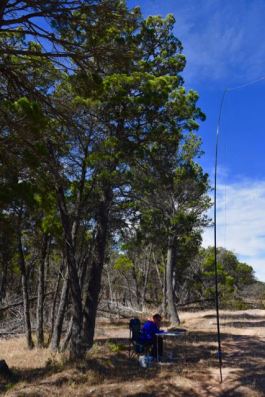 Whilst Marija was on air I took the time to explore the park a little.  Although I didn’t venture too far as the weather was hot and sunny, and I suspected some of the scaly and slippery inhabitants of the park would have been out enjoying the sunshine.

Once things slowed down for Marija, I put out a few calls on 7.144 but only had 3 takers, Andrew VK2UH, Gerard VK2IO in the Bargo State Conservation Area VKFF-1271, and Sergio VK3SFG.   I then tried 15m and despite numerous CQ calls on 21.244 there were no takers.  This was a little disapointing considering how well that band had performed during our first park activation of the day.

We then headed to 3.610 on 80m where we logged 8 stations after calling CQ.  They included Ivan VK5HS, Mike VK5FMWW/VK5FVSV. Adrian VK5FANA, Charlie VK5KDK, Mick VK3PMG/VK3GGG, and Bryce VK3NBI.  It was just before 5.00 p.m. and still very much daylight, but the 80m band was working very well across South Australia and into Victoria.  These further contacts got Marija over the line with her 44 contacts and another unique park for her as an activator.

I then called CQ on 14.310 for around 5 minutes but had no takers.  I tuned across the band and found only one decent signal and that was 9M6SWC in East Malaysia.  They were my only contact on 20m.

So a little dejected I headed back to 40m where I called CQ on 7.145.  This was answered by Colin VK4PDX, followed by Brett VK2VW, and then Geoff VK3SQ.  I logged a total of 17 stations including two more Park to Park contacts, with Neil VK4HNS in the Moogerah Peaks National Park VKFF-0336, and Liz VK2XSE in the Nombinnie State Conservation Area VKFF-1364. 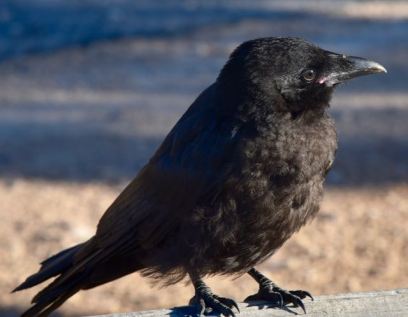 It was time to pack up and head back home.  Between the two of us, Marija and I had logged a total of 80 stations, including 22 Park to Park contacts.

At the conclusion of the activation we drove a short distance down to have a look at the mighty Murray River which flows very close to the park. 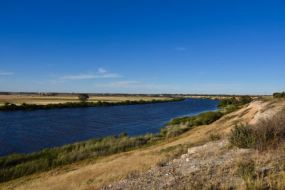 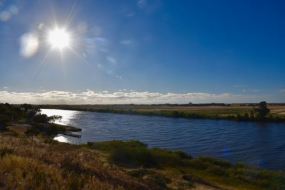 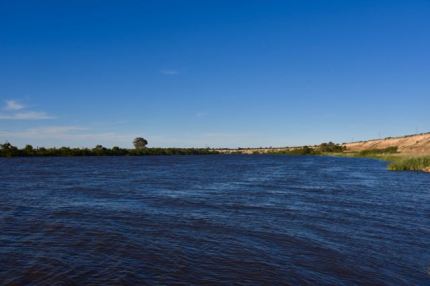