After leaving the Sorrento Museum, Marija and I headed to our next park, the Point Nepean National Park VKFF-0628, which is about 111 km (by road) south of the city of Melbourne.  This was to be another unique park for Marija and I as activators for both the World Wide Flora Fauna (WWFF) program, and the Keith Roget Memorial National Parks Award (KRMNPA).  And it was to be our final park for the 2018 VKFF Activation Weekend. 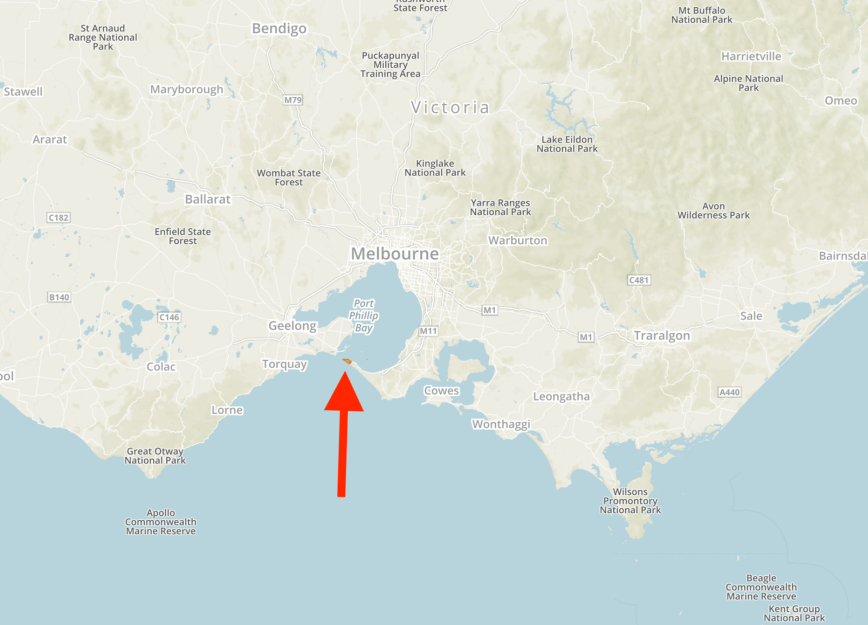 Above:- Map showing the location of the Point Nepean National Park.  Map courtesy of Protected Planet.

The Point Nepean National Park is a narrow strip of land on the Mornington Peninsula, located between Bass Strait and Port Phillip, comprising 560 hectares.  It is Victoria’s most visited National Park.  The park’s adjacent waters have been protected since 1975 and in 2002 were proclaimed as part of the Port Phillip Heads Marine National Park.  Point Nepean National Park includes South Channel Fort, the former Quarantine Station, various fortifications, Wilsons Folly conservation area, Defence Road and the former Range Area.

The park takes its name from the British politician and colonial administrator, Sir Evan Nepean.  Explorer John Murray named Point Nepean in 1802 during his journey through the area aboard the Lady Nelson.

The traditional owners of the land are the Kulin aboriginal people.  In 1802 European navigators arrived in the area.  Between 1840-1855, limestone from Point Nepean’s dunes was burned for the manufacture of mortar to be used with the bluestone of early Melbourne.  In 1852 the Quarantine Station was established at Point Nepean, following the arrival of the Ticonderoga in 1852.  The Quarantine Station ran continuously until 1980.  By 1878, forts commenced at Point Nepean.  The Eagles Nest was established in 1889 and Fort Pearce in 1911.  They were used during both the First and Second World Wars. Above: An aerial view of the Point Nepean National Park, looking north west towards Point Lonsdale and Geelong.  Image courtesy of google maps

We first headed to the London Bridge Lookout carpark, as Peter VK3ZPF had given us some local knowledge re an operating spot.  Unfortunately this was a very busy spot during our visit, and it was not possible to operate from here.  But we were pleased we did visit, as it offered sensational views of the coastline.  There were a number of para gliders enjoying the great conditions.  We also had a look at The London Bridge, a sandstone formation which has been formed through the weathering action of wind, rain and sea. 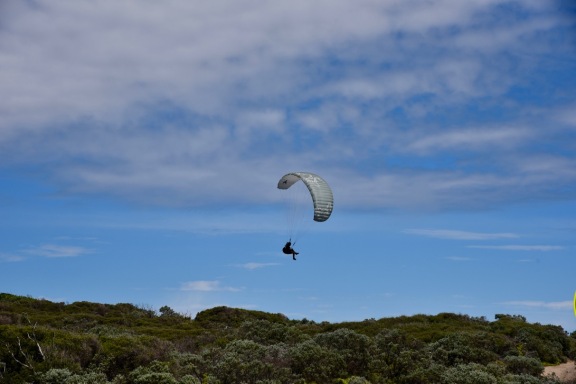 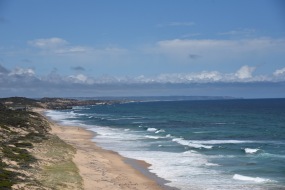 Looking south east along the coastline 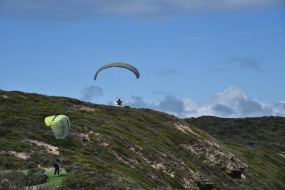 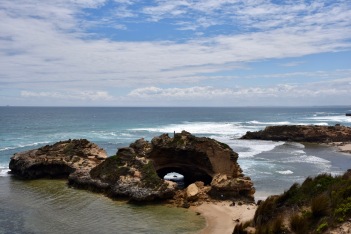 Alan VK3ALN had warned us that there was a market this afternoon at the park near the Quaratntine Station, but we decided to roll the dice and head there to see if we could find an operating spot.  Unfortunately the main oval was closed, but we did find a spot on the lawn a few hundred metres away from the visitor centre.  It was just far enough away, that we were not encroaching on anybody elses enjoyment of the park, and just enough room to stretch out the 20/40/80m linked dipole. 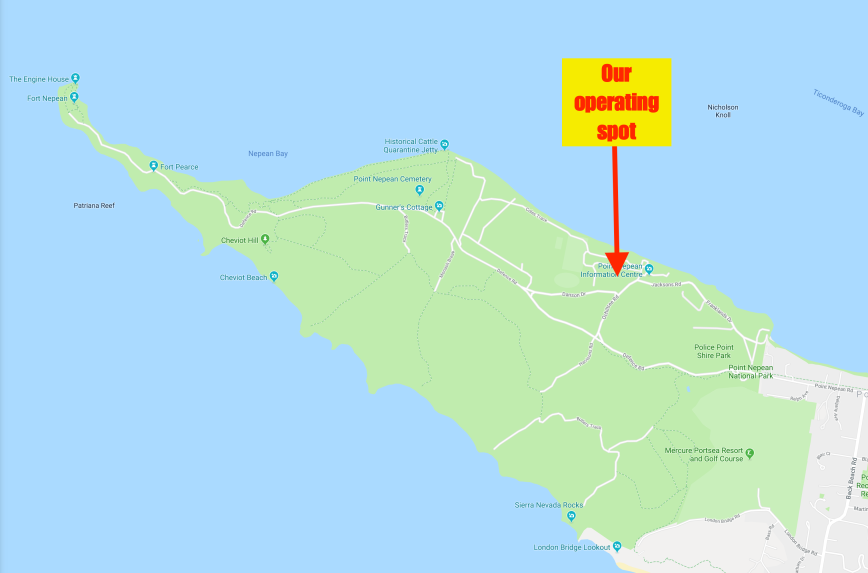 I kicked off the activation, while Marija went for a walk through the many historic buildings at the Quarantine Station.

Prior to calling CQ I tuned across the 40m band and found Chris VK1CT/p on 7.138 calling CQ from Bruce Ridge Nature Reserve VKFF-0835.  It was a nice way to start the activation with a Park to Park contact.

I then moved down to 7.133 and started calling CQ.  First in the log was Jim VK2FADV, followed by another Park to Park, with Ian VK1DI/p in the Farrer Ridge Nature Reserve VKFF-0840.  The 40m band had opened up very nicely, with good strong signals and lots of callers.

Contact number ten came 13 minutes into the activation, with a QSO with Cliff VK2NP.  I went on to work a total of 44 stations on 40m.  Contact number 44 was with Paul VK3HP.  This included the following Park to Park contacts:-

Marija returned from her walk and jumped into the operators chair.  Her first contact was with Compton VK2HRX, followed by Stephen VK5FETS, and then Andy VK5LA/p in the Moorook Game Reserve VKFF-1729.  Marija’s tenth contact was with Andrew VK2PEZ.  A further 5 stations were logged by Marija on 40m including a Park to Park with Gerard VK2IO/p in the Agnes Banks Nature Reserve VKFF-1881. 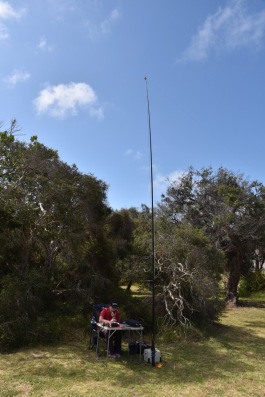 To complete the activation we headed down to the 80m band and logged Peter VK3PF/p who was in the Bruthen Flora Reserve VKFF-2282.  Unfortunately we did not have time to try 20m as I wanted to have a look at some of the Quarantine buildings and then head into Rye and head out for tea with Alan VK3ALN and his wife Robyn.

I worked the following station on 80m SSB;-

This is a major shipping channel, with overseas ships travelling through the narrow inlet between Point Nepean and Point Lonsdale into Port Phillip Bay and on to Melbourne. 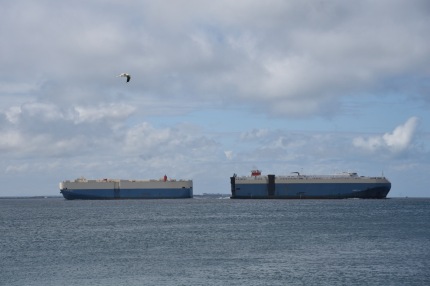 Unfortunately I had left it a little too late, and many of the buildings which Marija had looked through, were now closed.  I will have to come back here another time.  But we did spend about 30 minutes walking around the old Quarantine Station.

We had a little bit of time up our sleeve before heading out for tea with Alan and Robyn, so we took a walk up the main street of Sorrento, admiring many of the town’s historic buildings. 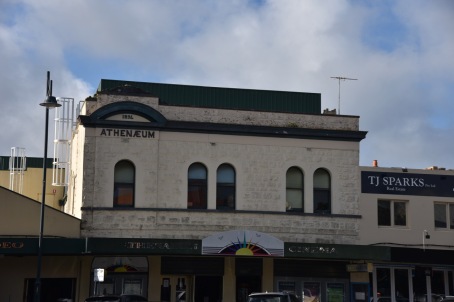 We also took a walk along the foreshore.  The Sorrento Pier was essential to Sorrento’s development.  It was built in 1870 and served the paddle steamers carrying passengers from Melbourne, right up until 1942.   The largest, the Weeroona, carried 1,927 passengers.  They were met by horse drawn cabs, wagonettes, or they could climb steps and cross the bridge to the train terminus and travel direct to the back beach, or ‘Ocean Ampitheatre’.  The steam tramway started in 1889 and continued until 1921. 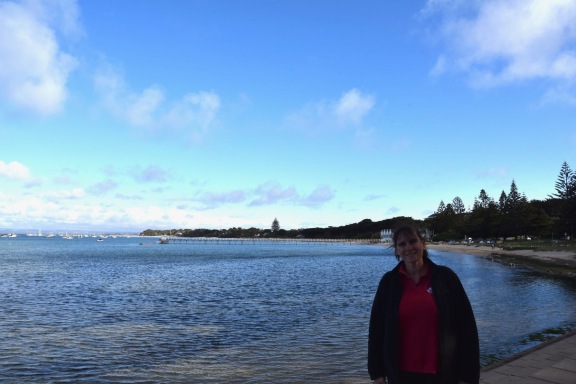 We then headed to the Rye Hotel and enjoyed a very nice meal with Alan and Robyn.